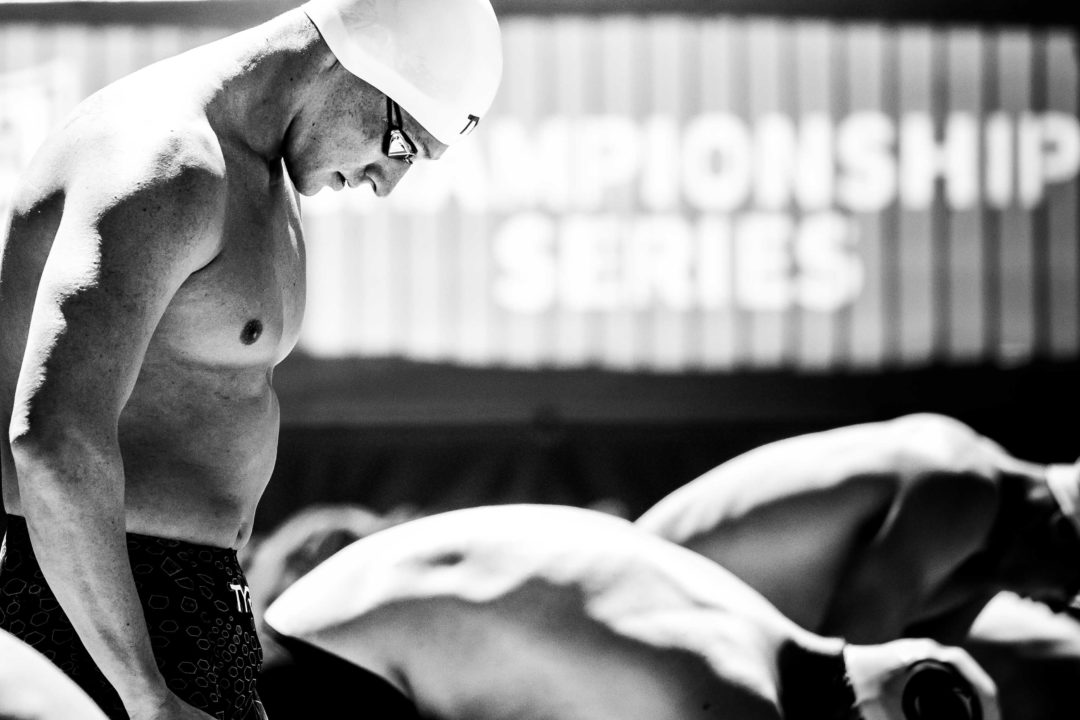 Ryan Lochte dropped the 400 IM which, for SwimSwam staff, was the most-anticipated race on his schedule this week at the US National Swimming Championships. Current photo via Jack Spitser/Spitser Photography

American swimmer Caeleb Dressel, fresh off his 8 total medal performance at the World Championships, has scratched another event at the 2019 US National Championships on Friday. He won’t swim the 100 fly, which was one of his 4 individual gold medals at Worlds last week, just as he didn’t swim the 100 free and 200 free on Wednesday and Thursday.

While it was believed that Dressel would eventually race this weekend in Stanford, he still hasn’t through day 3 of the 5 day championship. He still has remaining entries in the 100 breast, 200 IM, and 50 free in the final 2 days of the meet.

Other Worlds team member scratches include Mallory Comerford out of the 100 fly and Hali Flickinger out of the 400 IM. Neither swimmer is in California. Regan Smith, meanwhile, will swim the 100 fly, keeping with her trend of swimming all of her entries aside from the backstrokes in which she broke World Records in Gwangju. The anticipation has deflated just a little, because while Smith has been pretty good, and won the 200 fly title, she hasn’t shown the otherworldly speed this week that we saw from her at Worlds.

Another big scratch on the day comes from Dressel’s fellow Florida alum Ryan Lochte, who was scheduled to swim the 400 IM. In his first meet back from a 14-month suspension for receiving an IV in violation of FINA anti-doping rules, Lochte’s swims have been mixed. On day 1, he swam a 1:57.88 in a 200 IM time trial, which makes him the 4th-fastest American in the event this season. His 200 free on Thursday, however, saw him swim a 1:50.25 in the 200 free, finishing 37th and short of qualifying for any finals.

Lochte is still scheduled to swim the 100 fly on Friday morning, where he’s seeded in an early heat.

Is he even in Palo Alto?

I would have thought going into this that if he was going to do any event, it would be the 200 free so that he could throw down a tapered time to get him onto the relay in tokyo. Seeing as I don’t think he’s going to try and re-swim any of his worlds events here, and I don’t think he really has eyes on the 200 IM for next year, I would bet that he’s not swimming at this meet. But I’d love to be wrong

Xman – we’ve been told that he was planning to be there, but nobody on our staff has seen him yet.

Someone said he was locked in a stall. Have you checked there?

Big fan of the Dressel stall jokes, but can someone enlighten me on the origin? I know NotSwimSwam on Twitter helped make them popular…

He only changes in the stall apparently.

It’s inevitable for all of us, even Olympic champion swimmers (although Phelps has kept his physique it looks like).

Phelps has the advantage of having cut out drinking in his post-professional life. Keeping your physique is a lot easier when you go from drinking excessively while working out a lot to working out less and not drinking at all.

Lochte’s just a bit older than me, but I’m pretty proud to say that in my full blown dad-bodding-30s, I’ve set several lifetime PRs, so look out 1:54.00, Lochte’s coming for ya! 😀

Even the piano is relieved Lochte scratched the 4IM

The piano is temporarily unemployed and is looking for another suitor.