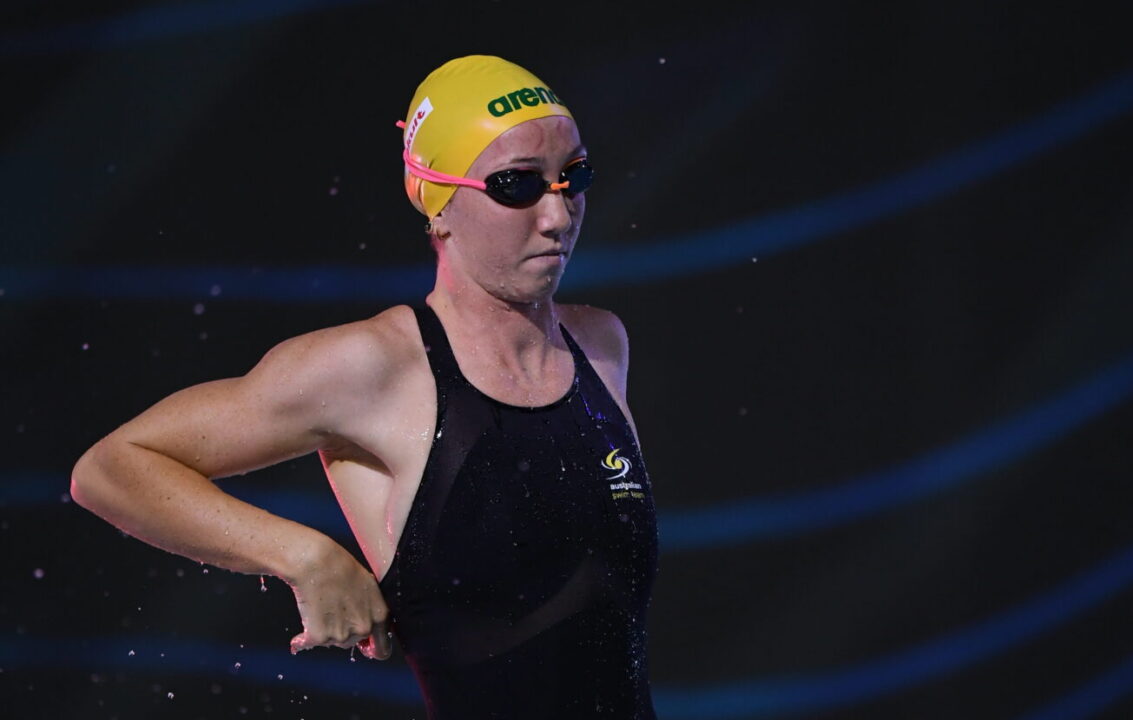 While bronze in the 1500 free was only Pallister's first senior international medal, it was not her first time drop in the breakout season that she's having. Current photo via Fabio Cetti

On a day when David Popovici swam the fastest 200 free since 2012 and Thomas Ceccon broke the world record in the 100 back, a performance that went largely unnoticed was Lani Pallister‘s bronze-medal winning 1500 free. Finishing behind the American duo of Katie Ledecky and Katie Grimes, the Australian clocked a 15:48.96, taking nearly seven seconds off her best time of 15:55.40 from Australian trials this year.

And while this was only Pallister’s first senior international medal, it was not her first major time drop in this incredible breakout season that she’s been having. Just three days ago, she finished fourth in the 400 free with a best time of 4:02.16, being 0.05 seconds faster than she was at trials. Pallister also set best times in both the 200 and 800 free at trials, and has a chance to improve on both of these marks in the 4×200 free relay on Wednesday and the 800 free on Friday.

Overall, Pallister has become substantially faster in all of her events this year than she was in the past. And for her to continue getting faster after trials despite being a rookie on the senior international stage is super impressive, as we often see newcomers falter in big meets after having breakout performances in smaller ones.

For Pallister, the journey to the top wasn’t an easy one. A year ago, she had failed to qualify for the Australian Olympic Team. Her 2021 trials showcase was a disappointing one, considering that she was just two years removed from sweeping the 400/800/1500 freestyles at the 2019 World Junior Championships. In addition, she had also been diagnosed with superventricular tachycardia (SVT), a condition in which one’s heart beats faster than normal. This condition forced her to undergo surgery, and caused her to develop an eating disorder in the proccess.

Pallister described 2021 as “the worst year of her life”, but after seeking support from her coaches and training partners, she now labels herself as being “back and better than ever”. And we can clearly see that through her performances at this meet.

Read more about Pallister’s struggles with heart surgery and an eating disorder here.

The women’s 4×200 free relay headed into this meet was billed as a four-way showdown between the United States, Australia, Canada, and China. But after the 200 free semifinals, has the path to victory become clearer for Australia?

First things first, with a 1:56.05 being the fastest time in the semis, it’s fair to say that everyone in the 200 free field was a little slow today. But the Aussies might have performed the best out of all of the other countries. Leah Smith and Claire Weinstein of the United States both missed the finals. Penny Oleksiak, Canada’s best 200 freestyler, was DQed; something that could negatively impact her coming into the 4×200 free relay. China has been off all meet, with Li Bingjie, Tang Muhan, and Zhang Yufei being slower than their best times by a large margin in multiple events.

That being said, Australia is the only country in the “big four” that hasn’t had anything disastrous happen to them in the 200 free so far. Madi Wilson and Mollie O’Callaghan finished second and third in semis with times of 1:56.31 and 1:56.34 respectivley, and although both of them have been faster, at least they have a lane in the finals unlike many of the swimmers labeled as top 200 freestyle contenders headed into the race. In addition, the Aussies also have Kiah Melverton, Leah Neale, Pallister, and Brianna Throssell available alongside Wilson and O’Callaghan. Melverton has been 1:55.94 this year, while the rest of them have been 1:56-low. When the top-end talent of many other countries isn’t showing, the depth that the Australians have may be exactly what they need to win.

Canada right now remains Australia’s biggest rival. In a scenario where Oleksiak isn’t seriously affected by her DQ and Summer McIntosh, Taylor Ruck (who qualified into the 200 free finals as well), and Kayla Sanchez are on form, this team could be dangerous.

The Aust team for the 4×2 heat will be interesting. In addition to holding back at least one of the fastest 2 (MOC, Wilson), I imagine they will want to rest Pallister as much as they can. Melverton also swimming the 800. I guess Throssell and Neale are definites.
Throssell’s effort in the 100Fly final was deceptive – my 1st impression was that she had a fairly poor swim, but that wasn’t so, just a particularly long way behind Huske!

With everyone besides Mollie being 1:55 high or slower this realy isn’t the sure thing some Aussies are making it out to be. I think many are missing how much of a threat the Canadians in particular could be if both Oleksiak and McIntosh go off (both 1:54?) especially with Oleksiak being fresh because of her DQ. Kayla Sanchez could provide another 1:55 mid like in Tokyo where she outsplit both Neale and Wilson. The big question mark is who the fourth will be but if Oleksiak and McIntosh both manage to produce 1:54s they might only need a 1:56 low from Ruck which is very doable based on her semi final time.

While it seems likely McIntosh is in… Read more »

Throssell had poor starts in at least 2 of the 3 rounds which made life harder for herself.

I think Throsell & Neale swim heats. Melverton hasn’t swum since 400 and Pallister will have had a day off since 1500 so I suspect they swim heats at least. All bar Pallister have got international relay experience so they should be able to negotiate heats safely.

Which two from that quartet swim finals … who knows However, coaches PLEASE don’t front end load just for the sake of it. Have one of your strongest off the gun, certainly, but you need to have someone who can actually positively impact the race or take the race away from the contest on anchor… Read more »

Re. last point – yes, absolutely. Assuming that the US will be behind after 3 legs, then you-know-who will be almost certainly chasing down the last Aust swimmer…a movie we have seen before!

It WAS appropriate when it was a clear case that your squad was, woman for woman, slower than USA and your best chance to possibly throw USA off and ensure a medal was to send out your fastest first and try and hold off everyone else. It earned them Olympic silvers in London & Rio but the coaches ignored the reality that both their and USA’s situations had altered.

Do agree with your previous comments re CAN and this relay. With AUS minus Titmus and USA shallow beyond Ledecky; this was always looking a 4 way lottery.

Whilst CHN may possibly be downgraded somewhat; CAN looks the line-up with the greatest potential upside and in McIntosh, potentially the greatest X… Read more »

Another thing I had forgotten about is O’Callaghan, Oleksiak and Sanchez all have 100 free semis early that session.

Pallister has been an “under the radar” major success story for AUS at this meet.

Under the radar in that she hasn’t attracted the banner headlines with “off the scale” times but a major success with regards to:

She is swimming in tough events against a towering figure in Ledecky but on her showings to date, she is marking out a strong place for herself in the upper ranks of the international hierarchy of these events.

Two PBs from two events so far. I think that perhaps the 800 should be her best but will it being her final event affect her performance?

My thoughts entirely. She’s backed up admirably in her events so far but she’s had to swim hard in both heats not just the finals. She should make 800 final comfortably but those petrol bills she’s rung up so far WILL present themselves for payment at sometime.

Whatever happens with the 800, she’s already earned a “Distinction” grade for her first Worlds “exam”.

Loving her meet so far.
Was surprised at the lack of depth in the 1500 after the top 4 though.

Yikes Winnington scratches 800 free only to finish last in the 200 event .. just for perspective the guy who finished 7th swam the 800 heats earlier in the day and still beat Winnington .. same guy Elijah beat in the 400 final so something must have gone wrong tactically in the plan

He was less than 3 tenths off his PB and was never medaling anyway. I wouldn’t read too much into it.

He should have just swam 800 free then .. if that’s the mindset why bother scratching the event ?

He was never medaling in either. It’s up to him what events he wants to swim. I don’t think every single thing means something has gone wrong

I think Australians probably have less concerns scratching an event where no one behind them qualified anyway. Obviously if MOC scratched the 100 free on a whim where there were 6 people behind her that all made the qualifying time, that would be an issue.

I think he has more to give in the 200 but had an off race. Hopefully he’s not feeling more pressure after his 400 free win.

He went out nearly 0.5 quicker than the semi (at 100m), and with his 400-800 endurance I would have backed him to hold that faster pace and maybe get under 1.45, alas didn’t have enough in the tank for that last night.
The 4×2 not looking that great? Much rests on how Incerti recovers – be interesting to see what he can do in the 100 heats today.

Penny’s DQ is a shame. But I expect it will light a fire in her for the 4×200 relay, not negatively affect her. While it is too bad she won’t be in the individual 200 final, she also won’t be as fatigued for the relay now.

Yeah I don’t see why it would negatively affect her? A DQ can get in your head a little but she should be fine. It would be more concerning if she swam properly and failed to qualify due to being slow.