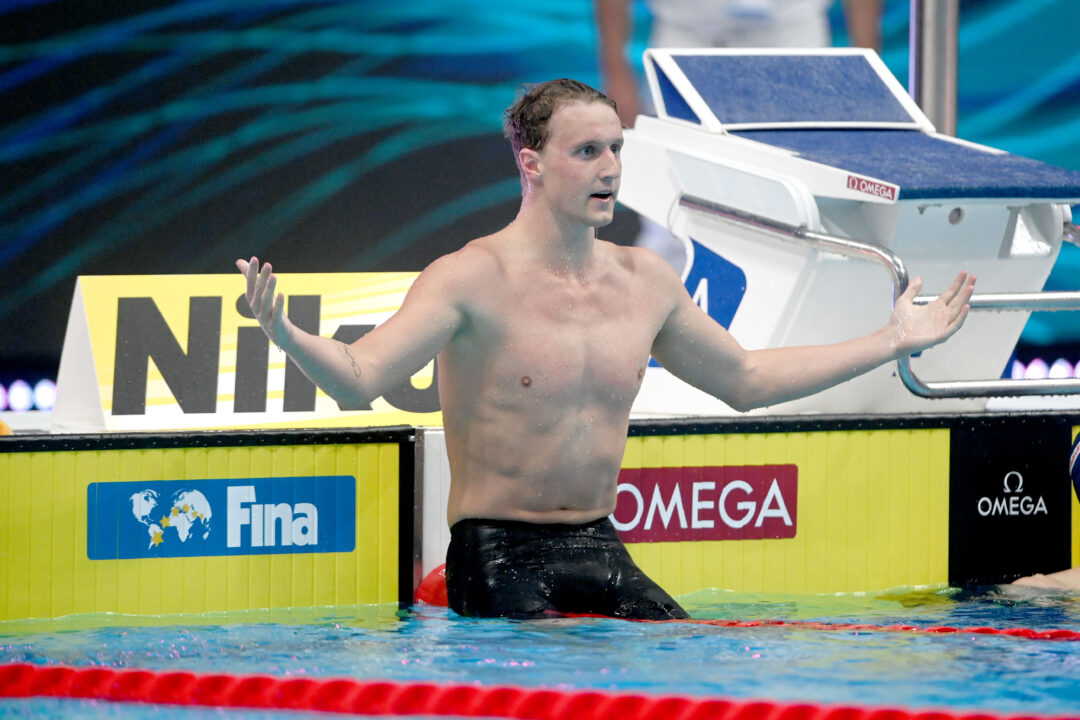 Both Winnington and Aubock are set to swim in the 200 free finals later in the evening session today, which likely explains why they didn't swim the 800 free. Current photo via Delly Carr

Australia’s Elijah Winnington and Australia’s Felix Aubock, who are seeded sixth and seventh in the men’s 800 free with times of 7:45.30 and 7:45.32 respectively, both no-showed the prelims of the event at the 2022 World Championships. Both of them are scheduled to swim in the 200 free final later in Monday’s evening session, which is likely the reason why they decided not to swim the 800 in the morning.

Winnington is coming off of a win in the 400 free, where he became the fifth-fastest performer in the history of the event by clocking a time of 3:41.22. Yesterday, in the semifinals of the 200 free, he set a new best time of 1:45.53 and finished fifth overall. Aubock also competed in the 400 free finals, finishing fourth in a time of 3:43.58 and setting a new Austrian record. In the 200 free semifinals, he finished second in 1:45.17, just behind top seed David Popovici’s 1:44.40.

While Winnington did not swim the 800 free at the Olympics last year, Aubock did so, finishing seventh in the finals with a time of 7:49.14.

Both Winnington and Aubock continue the trend of big-name swimmers no-showing heats at Worlds instead of scratching before the session started. For example, Chad Le Clos did not appear 200 fly earlier in Monday’s prelims session, and top seed Kaylee McKeown wasn’t present in the women’s 100 back the day before as well.

With extra events – FINA need to seriously look at WC & Olympic programmes. Maybe add another day. I would also prefer no semis (excepting maybe 50/100m events). And spread the relays out!

they’re never getting rid of semis

It’d make both sessions more exciting though. Instead of sleepy prelims, every race in the morning directly decides who’s racing at night, and every race at night is a final.

Dunno if that’d result in more eyes on the broadcasts – it would shorten them, for sure – but maybe that balances out.

They did between 1980 & 2000. Swimming didn’t noticeably suffer from their absence.

I can get the argument that they wanted to fill out the programs but there have also been a number of extra events that have been added to the program since (stroke 50s; M800; W1500; mixed relays).

Decisions regarding one’s racing program have always existed as have “double ups” but its come to the point of seeing degraded fields in so many events as swimmers and coaches balance individual and relay commitments as no country other than USA has anywhere near “full program” spread and depth that peak swimmers can be rested from relay heats.

It makes sense to have both medley relays on the final day but one of the 4×100 free relays on day 1 should be moved because it’s nice to end each finals session with a relay.