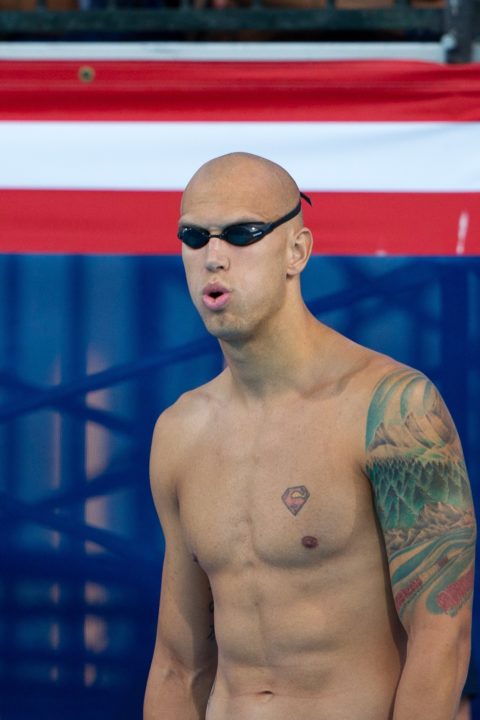 Following an impressive prelim swim of 49.91 in the 100 freestyle, Brent Hayden showed us that he is back and means business with a winning time of 49.51. He repeated tonight as the only sub-50 swim of the meet, with Stephen Caulkins coming in at second with a 50.90 and Carson Olafson getting bronze with a 51.35.

This time for Hayden maintains his second place Canadian ranking this season, still sitting behind Yuri Kisil’s 49.48 from the Knoxville Pro Swim Series. Hayden will race his second of two events on Sunday in the form of 50 free where he is entered with a top seed of 22.34.

Update: Markus Thormeyer jumped to the top Canadian spot with a 49.36 at USport Championships leaving Kisil in the second spot and Hayden third

Reigning World Junior Champion Jade Hannah took home two golds tonight, winning the 50 freestyle in a 26.18 and the 100 backstroke in a 1:00.68. On the 50 freestyle podium, Hannah was joined by Ingrid Wilm who took silver with a 26.57 and Elizabeth Ling with a 26.63 for bronze. In her second event, she was followed by Ingrid Wilm once again for second and Hana Edwards for third, swimming times of 1:01.06 and 1:03.95, respectively.

Hannah’s season best in the 100 back is a 1:00.32, second to two time World Champ Kylie Masse’s January swim of 59.48. 17 year old Hannah is gunning for a first spot on her first Olympic team but faces stiff competition. Assuming a victory from standout Masse at Trials, Hannah will be up against the likes of Taylor Ruck, Kayla Sanchez, Regan Rathwell, and Danielle Hanus, among others for the second spot.

Another big name on the World Junior scene who is quickly making a name for himself on a senior level, looking to get to Tokyo this summer is Cole Pratt. Like Hannah, Pratt picked up double gold tonight, taking the top spot in the 200 backstroke and 200 IM.

Distance swimmer Mackenzie Padington was top seed by nearly 10 second with a 1:58.82 after prelims in the 200 freestyle tonight but didn’t swim the final. Instead, Teagan McKenzie took gold with a 2:07.31, followed by Eliza Housman for silver at 2:08.24 and Payton Kelly took bronze with 2:08.38.

High Performance Center Vancouver’s Haley Black went in as top seed in the 100 fly with a 1:00.85 but ultimately disqualified the final. This left Elizabeth Ling to claim her second medal of the night, taking gold in a 1:05.19. Silver went to Kennedy Scott with a 1:05.99 and Meghan Abel took bronze with 1:06.44.

Richard Funk and Josiah Binemma, who have each represented Canada multiple times on a senior international level each picked up an individual gold. Funk in the 100 breast with a 1:02.38 and Binemma in the 50 fly with a 24.49. Both looking to make their Olympic berths this year, Funk currently sits at third in the country this season with a 1:02.16 from December. Binemma on the other hand sits in first place nationally this season in the 100 fly with his 53.33, also from December.

2015 Pan Ams bronze medalist Jeremy Bagshaw, who took fourth place to Brent Hayden‘s 100 freestyle victory earlier in the session secured an individual gold in 400 free with a 3:58.13. Silver in that event was Jacob Gallant at a 4:08.32 and bronze went to the 200 backstroke silver medalist Mathieu Cyr at a 4:10.93.

With a lot of national team representation in Calgary tonight, Canada’s top swimmers are still rather spread out as the final month of preparation for Olympic Trials gets underway. Among those who preparing are Markus Thormeyer and Emily Overholt leading a contingent of swimmers at the 2020 USport Championships, Maggie MacNeil and Tess Cieplucha nearing the end of their NCAA seasons and the Ontario sprint squad continuing training in Toronto. They, and many others will all meet head-to-head in just 5 weeks as they vie for their spot on the 2020 Canadian Olympic Team.

Racing continues on Sunday with prelims beginning at 8:30 AM and finals at 5 PM (MST).

Lol didn’t someone predict this? This is really impressive since he has only been training for like 5 months

Aw man, splits aren’t out yet but I hope he negative split this 100 again.

Didn’t Thormeyer go 48 and 49 at the U Sport this weekend too?

Read the article, it’s there

Suprisingly slow stroke rate on his 2nd 50 in particular. Bodes well for taper!