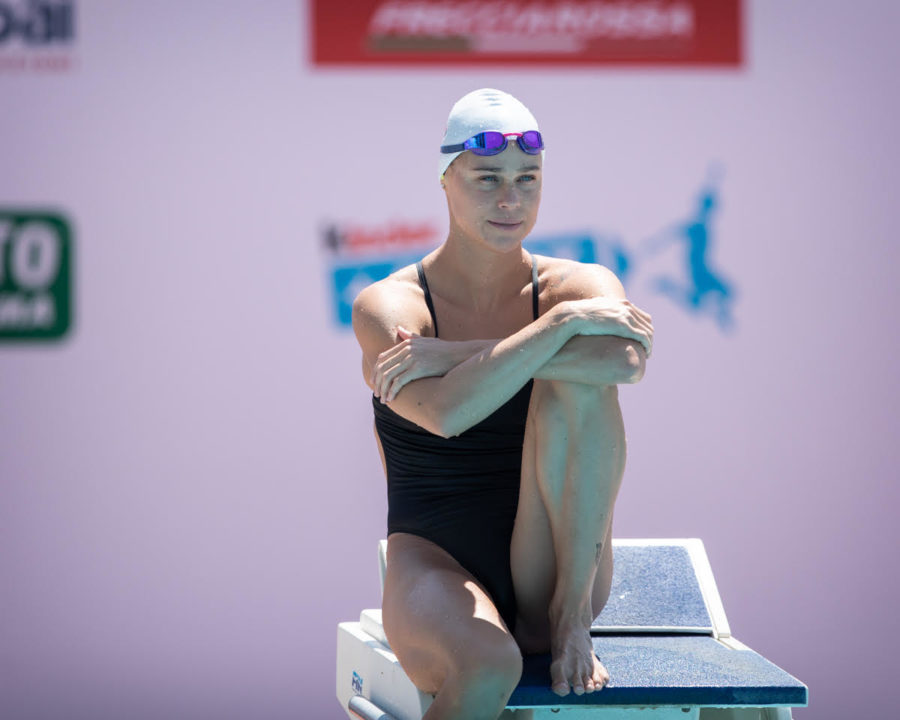 The final day of the FFN Golden Tour stop in Marseille is upon us, and we’re set-up to be treated to some prestigious racing coming tonight’s final. Based on this morning’s heats, there will be a tough hill to climb to the top of the women’s 50m free and 200m free, while the men’s 400m free and 100m free are among the top races to watch.

As for the women’s splash n’ dash, reigning Olympic champion Pernille Blume of Denmark got on the board with the fastest AM time of 24.31. That checked in nearly half a second ahead of the next-closest swimmer of Melanie Henique of the host nation who scored 24.79, while Dutch Olympian Femke Heemskerk rounded out the top 3 in 24.95.

With the final yet to come tonight, Blume’s prelims outing already ranks among the top 5 performances this season.

The women’s 200m free also saw heavy-hitters among the contestants, with French national record holder Charlotte Bonnet snagging lane 4 in one of two sub-2:00 times of the field. Posting 1:59.59 this morning, Bonnet will be flanked by Slovenia’s Janja Segel who touched in 1:59.97.

Italy’s Olympic icon Federica Pellegrini is right there in the mix as well with 2:00.20, while Russia’s Anna Egorova lurks as the 7th-seeded swimmer in 2:01.37. Egorova was already victorious in the 400m free earlier at this meet.

Moving on to the men’s 100m free, Frenchman Maxime Grousset threw down a quick morning effort of 48.77 to stake his claim on the gold, while teammate Clement Mignon was also swift and under 49-seconds in 48.92.

Mehdy Metella, still coming back to form post-shoulder surgery, rounded out the top 3 this morning in 49.13 to make it a run most likely among these 3 for the gold.

When do those rankings get updated?

How that comparatively tiny woman can go that fast against women like C1, Sarah, Simone, etc. who are 4-6 inches taller and 20 or more lbs heavier is amazing. Female equivalent of Anthony Ervin, or vice versa.

Wow Pernille Blume’s time is outstanding ! If her gold in Rio was a big surprise for everyone (including her), you can’t doubt her ability to take the gold in Tokyo once more ! She didn’t shine as bright as others in the ISL but long course seems to be working big time for her
To watch the finals, you can use the official ffn live-stream on their youtube channel (named Fédération Française de Natation)