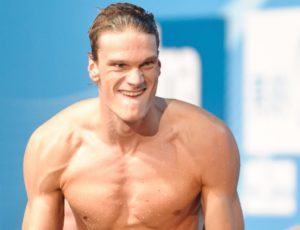 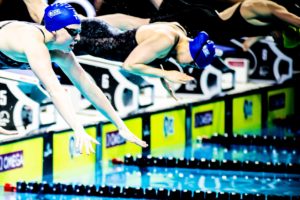 Sarah Sjostrom says one of the best parts about the ISL is equality between men and women… even in racing. Meaning she wants to start racing the boys

French Olympian, Florent Manaudou, is well known for his dimples, tongue piercing, and last name – which he shares with his sister, Olympic gold medalist, Laure. However, he has made it his own name, establishing himself as one of France’s strongest sprinters in the second decade of the millennia. He was born in Villeurbanne, France, on November 12, 1990.

After training for much of his youth under his older brother, Nicholas, Manaudou was recognized nationally in 2007, at the age of 17, as a Junior Champion in the 50-meter freestyle. However, it would take four more years for the dimpled sprinter to resurface on the international scene. Meanwhile, he joined the French Army. He is technically part of an artillery regiment.

Outside of the pool, Manaudou is often seen with his sister. He maintains a close friendship with Frédérick Bousquet, a member of the French team, and the father of Laure’s child, though the pair recently separated. He and Bousquet teamed up in mid-2013, posing for a project by photographer Olivier Ciappa, supporting the LGBTQ community. The exhibition in Paris was later vandalized, much to both Olympians’ displeasure. Prior to the London Olympics, Manaudou also participated in a HOM men’s underwear campaign, which featured several members of France’s swimming elite.

International breakout and 2012 Olympic Games
Manaudou returned to the public eye in 2011, when he competed at World Championships – a butterfly specialist, he came in 5th in the 50-meter fly. Shortly afterwards, he left his brother’s club and joined the Cercle des Nageurs de Marseille under coach and Olympian Romain Barnier. However, the 21 year-old did not medal in Shanghai.

The following year, Manaudou caused a commotion when he captured gold at the London Olympic Games in the 50-meter freestyle, an outside smoke from lane seven. He was the first French Olympic champion in the event, despite not previously holding a markedly fast time in comparison to his competitors – which included the 50 free world record holder and reigning champion, Cesar Cielo.

Manaudou famously slapped the water and stuck out his tongue after the victory, displaying a white tongue stud. After exiting the pool, his sister, Laure, jumped onto the deck to congratulate him. While his time was not a world record, unofficially, it was the world’s fastest 50 free split done in a textile suit, and his gold medal meant that he and Laure were the world’s first Olympic sibling champions in the sport of swimming.

Though he continues to compete in an increasingly challenging field, Manaudou appears to maintain amicable relationships with several of his fellow sprinters, including Americans Nathan Adrian and Anthony Ervin. They visited the French training group in Marseilles leading up to the 2nd Meet at the Mediterranean in early 2013. Manaudou bowed to Adrian’s sprinting dominance during the 50-meter free at that event, though he touched ahead of Ervin.

2013 World Championships
Manaudou has established himself as one of France’s top freestyle sprinters, delivering the best time of 2013 in the 50 free during French Nationals in April. While at 2013 World Championships, he once again went up against Cesar Cielo in the same event. Though he was a favorite coming into the race, with the top seed in lane 4, Manaudou did not make the podium, coming in fifth. Cielo retained his world championship title. The pair also faced off in the 50 fly, which Cielo won; Manaudou did not place.

Manaudou is also a formidable short course competitor, rounding out 2013 with a textile suit record in the 100 free, and the year’s best time in the 100-meter individual medley, at French Short Course Championships in December.

Injury and return
During the changeover between the 2013 and 2014 seasons Manaudou was resting due to a shoulder injury. The injury was caused in large part by over-training, thus he opted out of European s/c Championships and the Duel in the Pool between Europe and the United States’ national teams.

Once he returned to the sport, he finished out the year hardware laden, gathering four gold medals in Berlin at the 2014 European Championships, including individual gold in the 50 free, 100 free, and 50 fly (tied for 1st with Yauhen Tsurkin). In December at the 2014 World Short Course Championships, Manaudou won three gold, two silver, and a bronze medal. His 2 individual golds in the 50 free (20.26) and 50 back (22.22) were both world record setting performances.

2015 World Championships
At the 2015 World Championships in Kazan Manaudou medaled in the sprint events, proving his dominance in the short distance races. In the 50-meter butterfly Manadou came out of the semi-finals on top as the only sub-23 second swim in the race. In a stacked heat with veteran sprinters Cesar Cielo and Cseh Laszlo, Manaudou added 0.13 seconds to his prelim swim, which can be costly in a 50; however, he still was the only sub-23 second swim touching first to win gold.

Manaudou also focused on the 50-meter freestyle, which was filled with both veterans and up-and-comers like Kristian Gkolomeev and Vladimir Morozov. In the semi-final of the 50 free it seemed that the USA’s Nathan Adrian would take the win after beating out a longstanding American Record. In the final race though, Manaudou had one of the fastest reactions in the field, and raced to a first-place finish, just 0.33 seconds ahead of Adrian, to take a second gold medal home.

Manaudou joined Mehdy Metella, Fabien Gilot and Jeremy Stravius in the 400 meter freestyle relay, where France took the silver medal behind United States. Manaudou took over for the third leg in second position. His split of 47.14 gained half a second back on the U.S. but they had Nathan Adrian in as the anchor and he pulled away again, leaving France to take second in 3:10.53.

He made it two silvers in two events in the 50 meter freestyle. He was so close, 0.01 seconds in fact, to defending his Olympic title from London, but USA’s Anthony Ervin beat him on the touch. Manaudou settled for the silver finishing in 21.41, USA’s Nathan Adrian finished in third.

After Rio, Florent Manaudou announced on Facebook that he would be taking a break from his full training program, but made clear he still plans to compete in the sport of swimming down the road. Manaudou also addressed rumors that he had been jumping into the sport of handball. “In order to silence the fantasies and speculation, I have indeed begun to join in training with the Aix handball team because I gave up this team sport too early, even though it is complementary to swimming. I’m doing it with no other ambitions than to give the best of myself and find a different source of enjoyment.” You can read the full translated FaceBook post here.

During this hiatus, Manaudou commentated at the 2017 World Championships for French broadcasting, and even got in a race in the pool.

Return to Competition with Energy Standard and ISL

In March of 2019, Florent announced he was returning to the pool after an over 2-year hiatus, joining the ranks of the International Swimming League (ISL) Energy Standard squad. According to L’Equipe, the 50m free gold medalist was aiming for the Tokyo 2020 Olympics after his break, which included a stint with handball.

Manaudou made his official return to the competition pool in June of 2019 at the Sette Colli Trophy, where the Olympic champ threw down a 21.7 50 free in both prelims and finals, netting him a silver medal.