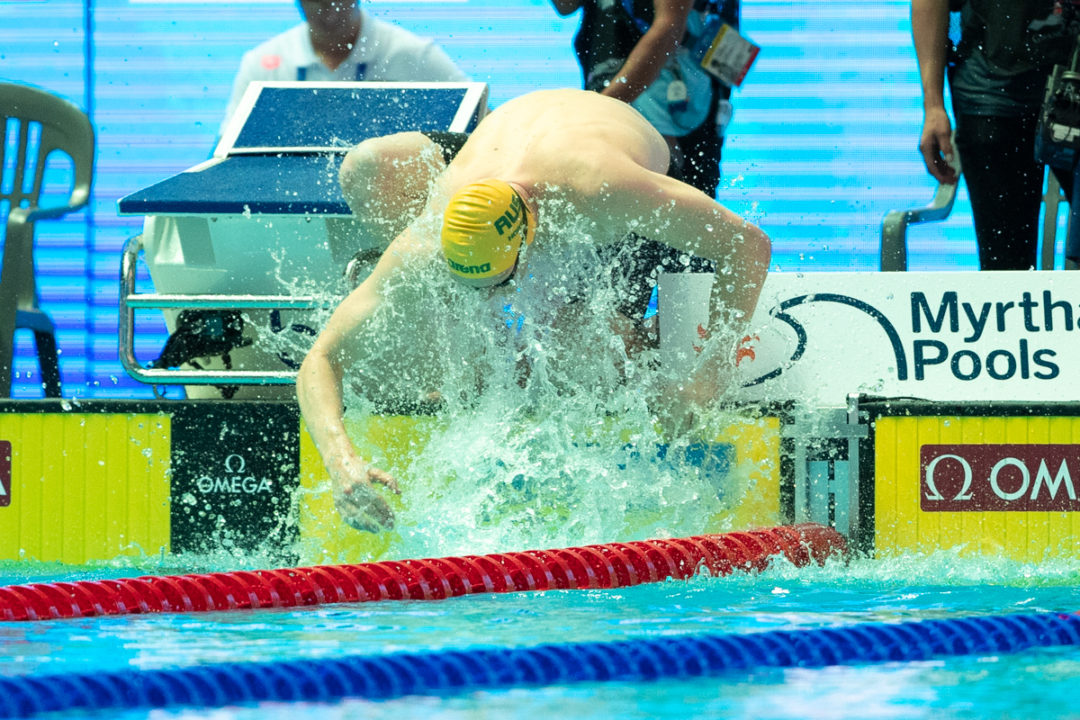 Mack Horton threw down the fastest split in the field on the anchor leg to lead Australia to gold and a new Commonwealth Record in the 800 free relay. Current photo via “Rafael/Domeyko Photography”

The Australian quartet of Clyde Lewis, Kyle Chalmers, Alexander Graham and Mack Horton combined to win gold and set a new Commonwealth Record in the men’s 800 free relay, registering a time of 7:00.65.

The previous mark, which was also an Oceanic and Australian National Record, was set by the Aussie team of Kenrick Monk, Robert Hurley, Tommaso D’Orsogna and Patrick Murphy at the 2009 World Championships at 7:01.65.

The gold medal is Australia’s first in the event since 2003.

On the anchor, Horton started down the likes of Townley Haas, Martin Malyutin, James Guy and Stefano di Cola and came out on top with the field’s fastest split of 1:44.85.

I just hope the Aussies put together a decent team in the mixed freestyle relay (non Olympic event) to keep the relay medal streak going hopefully ..

Well done Australia. Their relays have been on fire this week. Really looking forward to seeing this battle again next year between five great teams.

It’s great to see the Aussies doing so well in the relays, that win last night was 4 from 5, this is extraordinary, we are not the US, In the 5th one we got bronze. There are 3 more relays, 4 x100 mixed, if Aussies take seriously up there with US. Then the 2 medleys, the girls should medal but behind the US. The men will struggle to medal, but great by the Aussies if we medal in 7/8 with 4-5 golds.

Tend to agree that AUS W4XMED is most likely playing for silver unless Hansen somehow pulls out a sub 1-06 split. Much will also depend on either Atherton or McKeown putting them in top 2-3 at first change otherwise its a podium rescue mission for both McKeon (who’s possibly running low on petrol) & C1.

M4XMED can certainly medal but it really looks a major scrap for the minors behind US. Wilsons newly found 100 speed probably puts them on par for the BRS leg for most every other team bar GBR. Temple has had an excellent meet (making 100fly final) and shouldn’t be shedding too much time to most other minor medal contenders & Chalmers probably has the… Read more »

The Aussie 4X200 has always promised in recent years but never delivered, I hope as you say Onwards & Upwards, this team can improve, there is so much potential here.

Agree with you both. Whilst winning Gold nect year is far from certain, this is the first time since Athens that this AUS relay has been a serious contender for the top step of the podium. Furthermore, the ages of most members and prospective members is such that its likely it can remain seriously competitive post Tokyo. Its fair to say that this looks likely to be the ‘flagship” relay for the AUS men going forward.

and many other teams for the matter

This is the most exiciting men’s 4×200 ever. I can’t remember the last time five teams were so close in the last 100. All five had legit shot at gold, until Horton sped up in the last 50m.

“The four men were incredibly consistent with no one dipping over 1:45.6”

And Mack finally got his toy with his medal ! They wouldn’t give him a toy the other night