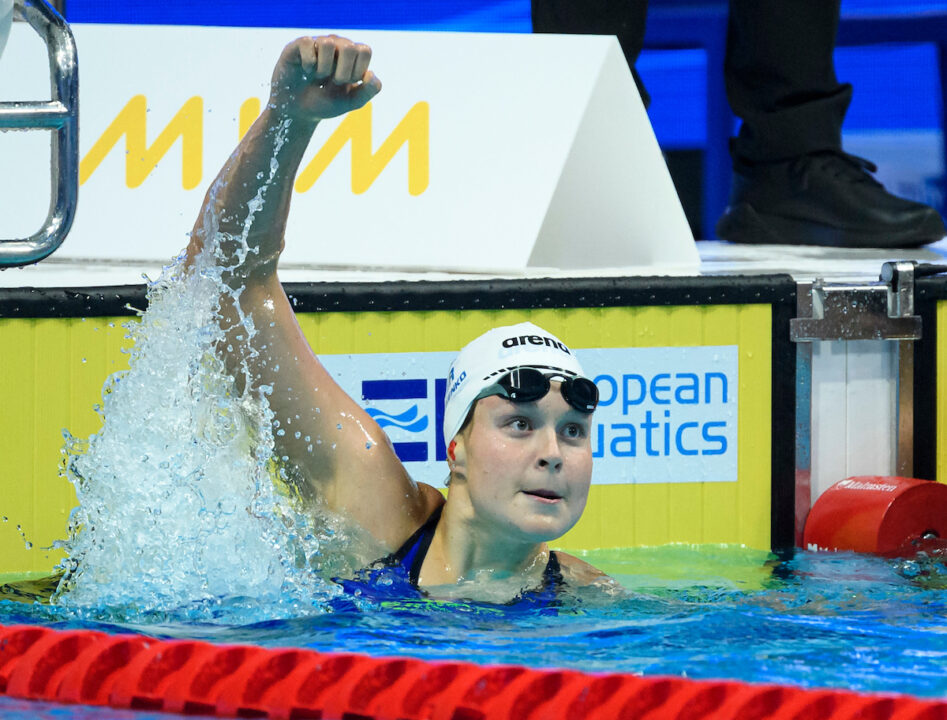 Gorbenko, 18, picked up the gold medal victory in the women’s 50 breaststroke, breaking her Israeli National Record in a time of 29.34. She set the previous record of 29.53 during the International Swimming League (ISL) playoffs in November while competing for the LA Current.

Not only was this Israel’s first world championship gold medal in the pool, but it was also just their third of any color in history.

Prior to Gorbenko’s win, the only other Israeli medalists at the World Championships (long course or short course) came from Michael Halika, who won bronze in the men’s 400 IM at the 2000 SC Championships in Athens, and Vered Borochovski, who also earned bronze in the women’s 50 fly at the 2002 SC Champs in Moscow.

The multi-talented Gorbenko has had a breakout 2021, including winning gold at the European LC and SC Championships in the women’s 200 IM and making the Olympic final in the 100 back, placing eighth.

As for the 50 breast, Gorbenko became the first Israeli swimmer sub-30 in early October on the FINA World Circuit in Berlin (29.61), and has now eclipsed the barrier six times. In addition to breaking the Israeli Record in the ISL in 29.53, she also clocked 29.68 and 29.90 during the playoffs, and was 29.77 in the prelims here in Abu Dhabi.

Joining Gorbenko with national records in the women’s 50 breast final was Sophie Hansson and Mona McSharry, who placed third and fourth overall, respectively.

Hansson notably won her second medal of the day in the event, having swum the breaststroke leg on Sweden’s world record-breaking women’s 200 medley relay at the beginning of the finals session (splitting 29.07).

It’s also worth noting the women’s 50 breast field was missing expected medal threats Alia Atkinson (the defending world champion and world record holder) and Arianna Castiglioni, who were both among the numerous breaststrokers that were disqualified on Day 1.