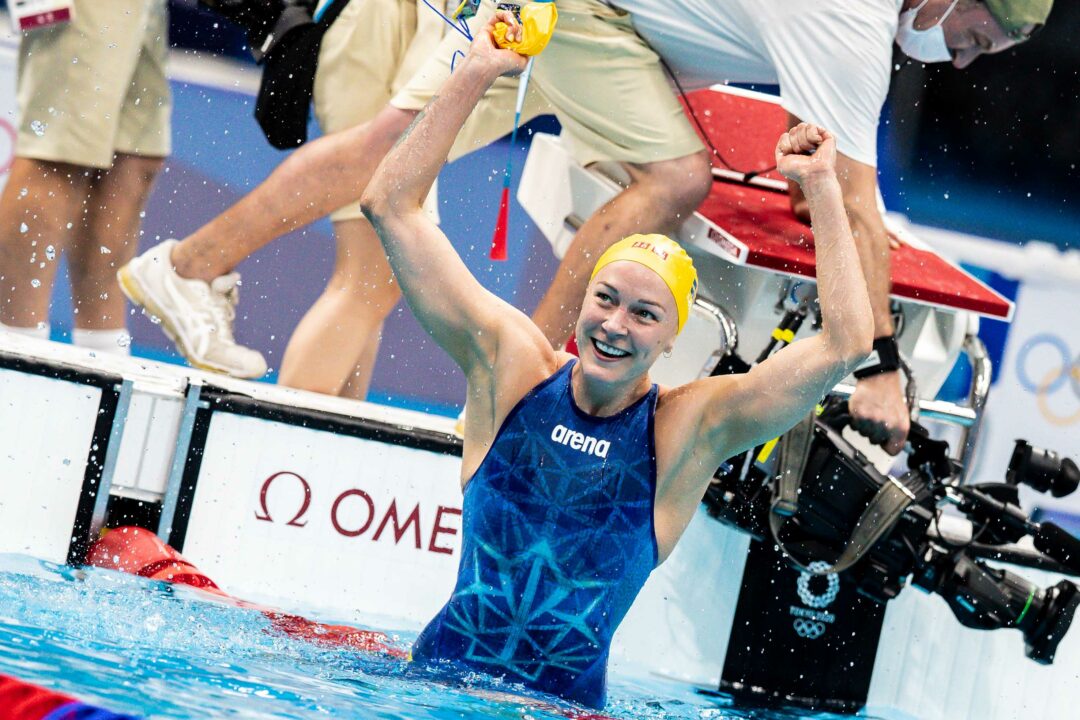 We’re one-for-one in terms of World Records on night 2 of the 2021 FINA Short Course World Championships. The Swedish women’s 4x50m medley relay just blasted a time of 1:42.38 to match the World Record and Championships Record that the United States put on the books at the 2018 edition of this competition in Hangzhou, China.

Tonight, Louise Hansson got things started with a new Swedish national record right off the bat on the lead-off backstroke leg. She scored a split of 25.91 to overtake the 26.07 she logged during the International Swimming League (ISL) season 3.

Next in line was Sophie Hansson who maintained the lead with a speedy breaststroke split of 29.07, out splitting the likes of Olympic champion Lydia Jacoby (29.62) of the United States and Italy’s Arianna Castiglioni (29.34).

The 3rd split was an absolute scorcher thrown down by superstar Sarah Sjostrom, with the 28-year-old crushing a time of 23.96 for butterfly. For perspective, the next closest fly split came from the Netherlands’ Maaike de Waard who hit 24.51.

Veteran Michelle Coleman wrapped up the World Record with a split of 23.44 on the final anchor.

Sweden clocked a morning heats time of 1:45.63 to claim the 5th seed, with just Louise Hansson and Coleman pulling double duty. Hansson was on fly in the morning, however, while it was Hanna Rosvall on backstroke and Emelie Fast on breast.

Comparing the splits from the previous World Record, we saw the 2018 version lead off with Olivia Smoliga in 25.97, Katie Meili clocking 29.29 on the breaststroke, Kelsi Dahlia carrying the speed with 24.02 and Mallory Comerford sealing the deal in 23.10.

The last relay World Record that Sweden broke as a nation was way back in 2013 when Coleman, Sjostrom, Louise Hansson and Magdalena Kura combined for 1:37.21 in the women’s 4x50m free relay.

So , you have World Records , Short Course World records and then you have
Universe records in yards in 25 yd and 50 yd pools because very few in the universe ever trouble the Yard pool timekeeper.

I think it’s really cool that after years of carrying Sweden relays to low finals finishes, Sjostrom has come into this trio that makes it so she has a medley relay contender for multiple years.

One example that it is not the first time.
2015 Long Course Worlds Sarah was part of the Medley relay that finished 2nd.
3 out of these 4 women swam on that relay.

Reality: You’re not supposed to be in contention för WRs 10 months after completely fracturing your elbow.
Sarah Sjöström: Hold my titanium screws…

They didn’t think she would go faster.

They just thought they had to use White.

This will be the downfall of American relay dominance.

fwiw, it probably wouldnt have changed the outcome

It wouldn’t have mattered. Jacoby and Curzan got crushed by Sweden doing good times for them. Pretty sure any coach could do the math. They probably decided why go with just one person prelims and finals and have one less medal to share? They were swimming for silver anyway. White beat Berkoff in the semis of the 100 back, so maybe that’s why she got the finals nod. Plus White had a history at Olympics with the other three members. But they probably just said we’re swimming for second, likely have a comfortable margin to beat the third-place team, so let two relative novices get a WC silver medal instead of just one. Plus, they added a lot of time… Read more »

50 fly WR is going to get smashed on Sunday

Headline is a tad misleading

I know I was confused. Impressed, but confused.

Along with that, the stroke order in the splits comparison is wrong too