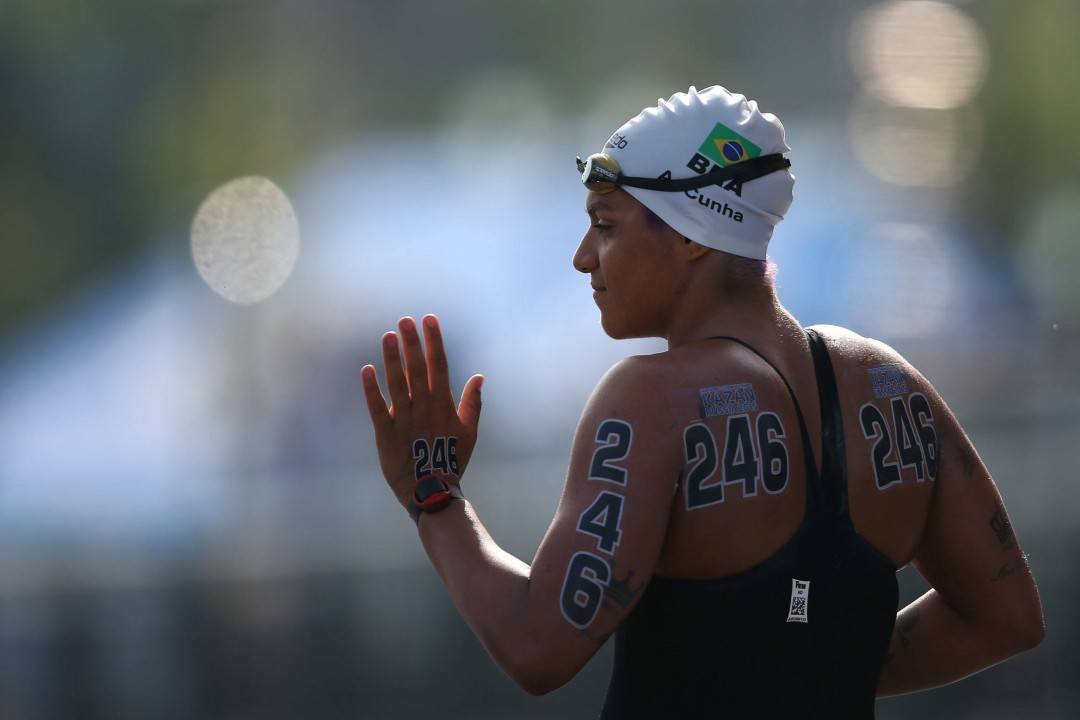 The Olympic Champion and 7-time World Champion underwent surgery on her rotator cuff and said that she'll be "even stronger" in 2023. Archive photo via Satiro Sodre/SSPress

Brazilian Olympic Champion Ana Marcela Cunha is currently recovering from shoulder surgery, which she underwent on Sunday, November 20. Brazilian journalist Alex Pussieldi shared a photo of Cunha smiling in her hospital room after the operation, which Cunha added to her profile as well.

The operation was on Marcela Cunha’s injured rotator cuff, specifically the subscapularis tendon and supraspinatus muscle, according to a joint Instagram post by Marcela Cunha and coach Alex Pussieldi. The post added that Marcela Cunha will be “even stronger” in 2023.

Shortly before her surgery, Marcela Cunha wrapped up a busy 2022 by competing in the FINA Marathon Swim World Series. The 4-leg series included stops in Portugal, France, Canada, and Israel. A fifth stop was scheduled for Puerto Rico but was canceled.

Marcela Cunha won the women’s 10km races in Portugal in May and France in July, came 3rd in Canada in August, and then placed 2nd at the final stop in Israel in November. For her four top performances, Marcela Cunha finished the series in first place with 2,900 points, ahead of second place Sharon van Rouwendaal who scored 2,700.

In between the Portugal and France stops of the Marathon Series, Cunha raced to three medals at the 2022 World Championships in Budapest, Hungary. Cunha took gold in the 5km and 25km races and bronze in the 10km. By winning the 25km she became the 4th person in history to win 5-straight world titles in an event, joining the likes of Michael Phelps, Katinka Hosszu, and Katie Ledecky.

Marcela Cunha has collected 14 medals across 6 World Championships and won her first Olympic medal in 2021 when she topped the podium in the women’s 10km.

While Marcela Cunha mentioned that she will be back and ready to race in 2023, there will be a significant change to her schedule at next year’s World Championships. For the first time since 1991, there won’t be a 25km race at Worlds as FINA recently announced that they are pulling that event from the lineup due to low entry numbers. That means that Cunha won’t have the opportunity to become the first-ever 6-time World Champion in a single event.

It’s not clear yet when Marcela Cunha will return to racing, but the first stop of the 2023 FINA Open Water Tour will begin on May 20 in Italy and the second is just one week later in Portugal. The next meet after that will be the 2023 World Championships in Fukuoka in July. After World Champs, there are four more Open Water Tour meets in France in August, Taiwan in October, Hong Kong in November, and Israel in December.