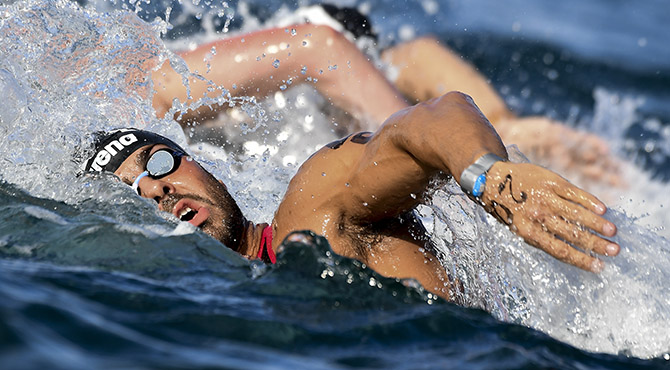 The 25k is the longest-running open water race at the FINA World Championships, having been swum at every edition since 1991. Current photo via Andrea Masini/Deepbluemedia/Insidefoto

As reported by Alex Pussieldi, the statement from FINA didn’t mention the fate of the 25k race in any meets apart from the 2023 World Championships. The statement explained that lower entry numbers in the 25k at the last two World Championships (2019 and 2022) and operating costs are among the reasons for this decision.

When is the OW meet in October? USA is selecting the JR team and NAT team off of a “10K race at an unknown location in October”. Any word?

The Vegas venue was cancelled

Keep the 25k, but make it elimination. One swimmer every km goes ciao ciao

I would watch the s*** out of that event. It would be akin to cycling criterium racing. Little bursts of energy throughout the race.

Would be great TV

This event simply isn’t supported well by our own sport. If every time we turn on the TV to hear swimming announcers around the world call the 1500 “the marathon” of swimming. No! The 1500 is NOT the marathon of swimming. The 25K is that race – and it’s not even decently covered or supported by our own sport at any level (local up to FINA).
Hard to argue there’s no audience for events like this, when Ironman regularly gets prime TV time for 10 hour+ races. Marathons get covered. Adventure Eco-Races are back and get a whole Amazon show for those (week long race!).
With the massive uptick in outdoor recreation interest, and things like Ultra-Marathons gaining… Read more »

I’m coming at this from an open water swimmers perspective, the 25k allowed many people who would have not previously had the chance to represent their country to experience worlds and that fact that that is being taken away just makes me sad. I get it didn’t pull in a lot of swimmers or views but the chance to compete is invaluable for those racing

More swimming socialism at its finest! As a sport, we all continue to insist that *someone else* fund our good times, without being willing to do any of the things to make those good times financially sustainable.

Socialism is when swimming

Myself being an ultramarathoner, maybe Fina could implement a 50k (30 miles). Even as an exhibition event.
Swims like the English and Catalina channel are becoming massively more popular, why not offer an “extreme” distance event?

They’re cutting this because it’s expensive to put on and they have low entry totals and your solution is to double the distance?