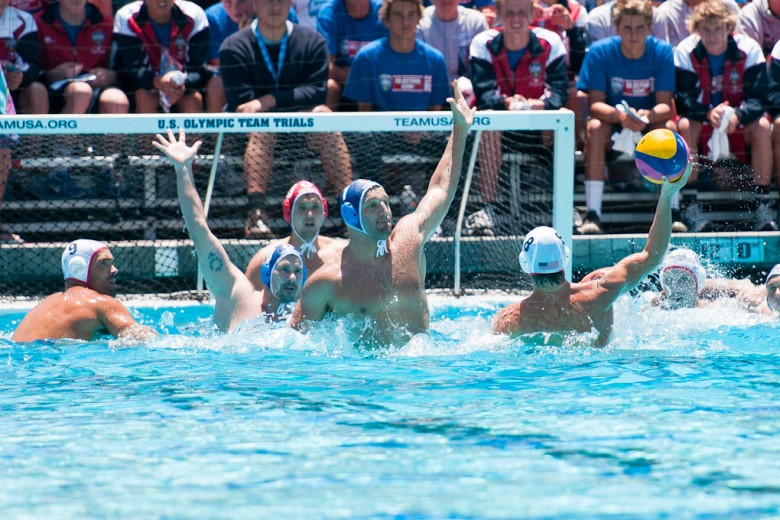 Tony Azevedo opened up the scoring for the Americans, and didn't slow down en route to 6 total scores in a dominant American performance (Photo Courtesy: Mike Lewis/OlaVistaPhotography.com)

In a rematch of the 2008 Olympic gold medal game, the United States men matched up against the Hungarians Sunday at Newport Harbor HS, in front of a packed crowd in the heart of American water polo country.

The Hungarians are the two-time defending Olympic Champions, and the Tony Azevedo-led Americans are confident headed to London.

Hungary is one of the highest scoring teams in the world – at this year’s European Championships, despite only earning a bronze medal, they outscored any other team in the tournament by two goals per game.

But American goalie Merrill Moses was on fire at this meet, making 12 saves to hold the Hungarians to only 9 goals, as the Americans pulled off a thrilling 12-9 upset. That included a clean sheet in the 2nd quarter, which is a rare occurrence against the Hungarians (they weren’t shut out for a single quarter at the European Championships – one of the best tournaments in the world; and only in one quarter of the entire Olympic Games in 2008).

By the 4th quarter, the Americans had doubled up their opponents’ score 10-5, and though the Hungarians scored twice unanswered to open the final period, they would come no closer.

Moses’ partner-in-crime, Tony Azevedo, led the scoring with 6 big goals. Peter Verellas also scored twice, both coming in man-up situations in that 2nd-quarter that really broke the match open for the Americans.

This is the Americans’ first victory over Hungary in a decade; though it will be a huge confidence boost, this three-team exhibition series has not been perfect. The night before, they lost to Croatia 8-7 (scoring only 2-13 on power plays).

They will get another shot at both teams on Thursday (Hungary) and Friday (Croatia) at UCLA.