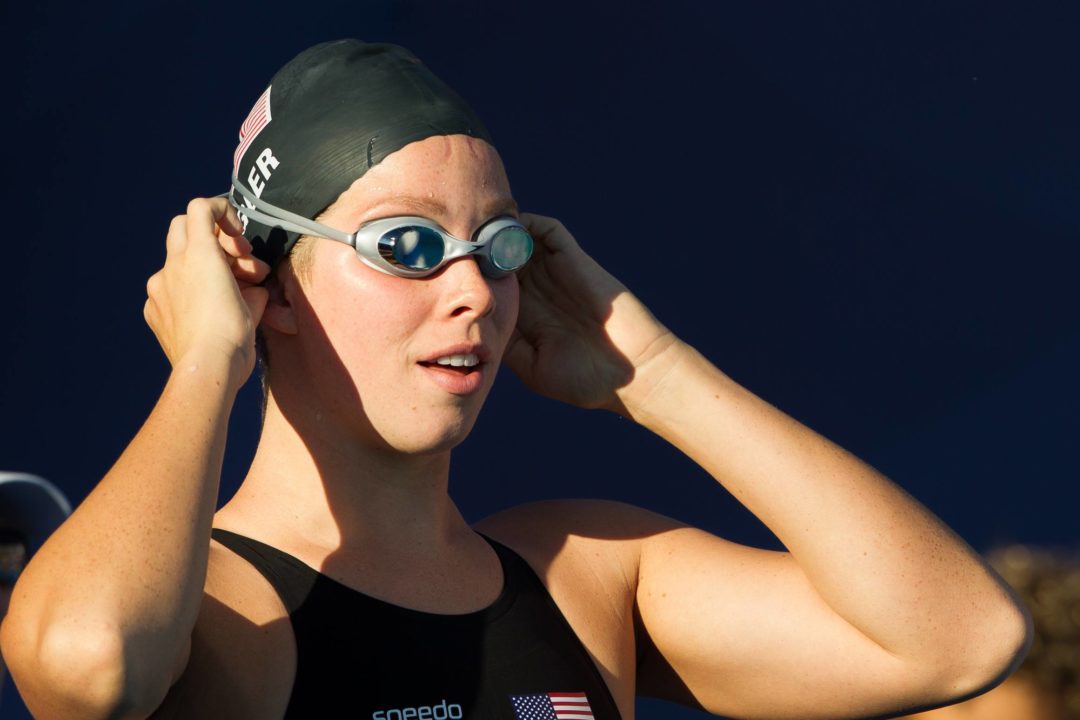 The final night of the 2012 Speedo Grand Challenge in Irvine, California, as is the norm, had many of the biggest names headed for home. But there was still enough firepower for some great swimming to wow the fans in attendance.

The first race of the night was the best final of the night -the women’s 800 free. USC swimmer Haley Anderson and National Teamer Kate Ziegler squared off toe-to-toe in the distance race. Ziegler was just behind Anderson at every turn, and knowing that Anderson was in the water this morning working on toward the open water qualifier in two weeks, there was the anticipation that Ziegler would overtake her at any given turn.

But Anderson held on, held on, and held on some more, at one point extending her lead to as big as a second. Ziegler had a great finishing 150 meters, but ran out of real estate at the finish, as Anderson won in 8:33.65. Ziegler’s 2nd-place time was 8:33.97. Both swimmers, just like we saw a lot of at the European Championships this week, negative-split this race in a big way – opening in 4:18’s and closing in 4:15’s.

Janet Evans placed 6th in the final in 8:49.36 – a touch slower than she was in the prelims. Also in the prelims, 12-year old Isabella Rongione scared an 11-12 National Age Group Record with an 8:58.33. She trains at the same FISH program that Ziegler grew up with and has returned to now in her 20’s.

Shortly thereafter, Andrea Kropp won the women’s 200 breast in 2:26.62 – the second-fastest time of her career. She’s looked better-and-better since going to USC to work with Dave Salo. That bettered Australian Sarah Katsoulis‘ 2:29.89. Wisconsin’s Ashley Wanland was 3rd in 2:30.54.

In the men’s race, Christian Schurr won in 2:12.81 – the best time of his career, and based on him switching his competitive nationality to Mexico, should stand as a new Mexican National Record if ratified by the federation.

USC’s Vlad Morozov continued to work on his 100 back, where he earned a surprise individual Olympic bid for Russia. So much has he shifted his focus, that he swam the 100 back and not the 100 free on the final day of this meet; but the choice of events paid off for a win in 54.67. That topped a trio of Australians joining him in the final, headed by Ashley Delaney in 54.74.

So if Schurr is competing for Mexico will Reese still coach him?