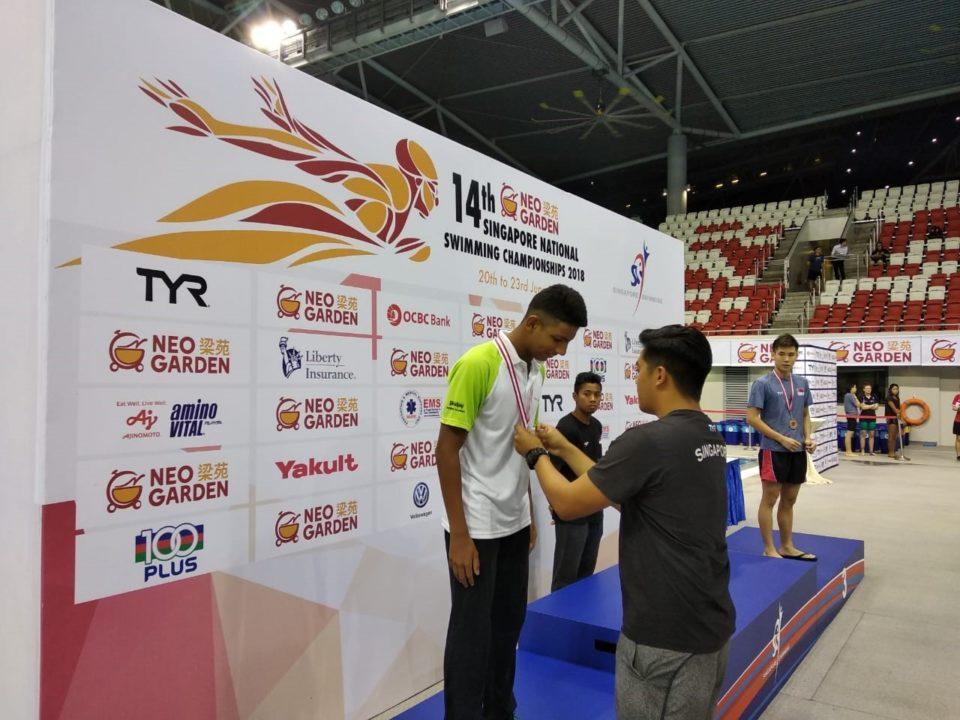 Page lowered the 1500 free record while racing in Mission Viejo and Nataraj took out the 100 backstroke at the Settecolli trophy in Rome. Archive photo via Advait Page - Singapore Nationals

In Mission Viejo, Advait Page swam to victory in the men’s 1500 freestyle with a 15:23.66 to shave just under 2 seconds off Kushagra Rawat‘s former mark of 15:25.22 which he set at the NSW State Championships in Sydney, Australia back in March 2020. The swim for Page was a 6-second improvement upon his entry time in the event of 16:29.54.

Page has raced for India at the 2019 World Swimming Championships and entered only in the men’s 800 freestyle, delivering an 8:10.35 for 29th overall.

At the 2021 Settecolli Trophy in Rome, Italy, Srihari Nataraj raced to a silver medal in the men’s 100 backstroke with a 53.90, becoming the first Indian to crack 54 seconds in the event. His record-breaking swim was an improvement upon his own previous record in the event of 54.07 which he set earlier this year at the 2021 Uzbekistan Open Championships in Tashkent, Uzbekistan. At that meet, Nataraj also broke the men’s 50 backstroke Indian record with a 25.11.

While Nataraj’s 53.90 Indian record was within 0.05 seconds slower than the 53.85 FINA A standard, Indian could still potentially name him to their 2021 Olympic squad as it was under the 55.47 FINA B cut.

Srihari has already been nominated to represent Indian Swimming at Tokyo under the Universality Quota. Hope that this timing is good enough to get him an official B cut invite as he could be high on the waiting list in case the 878 does not fill up.

Also please check your reference to the Uzbekistan meet, as per the FINA website the entire meet and results are INVALIDATED.