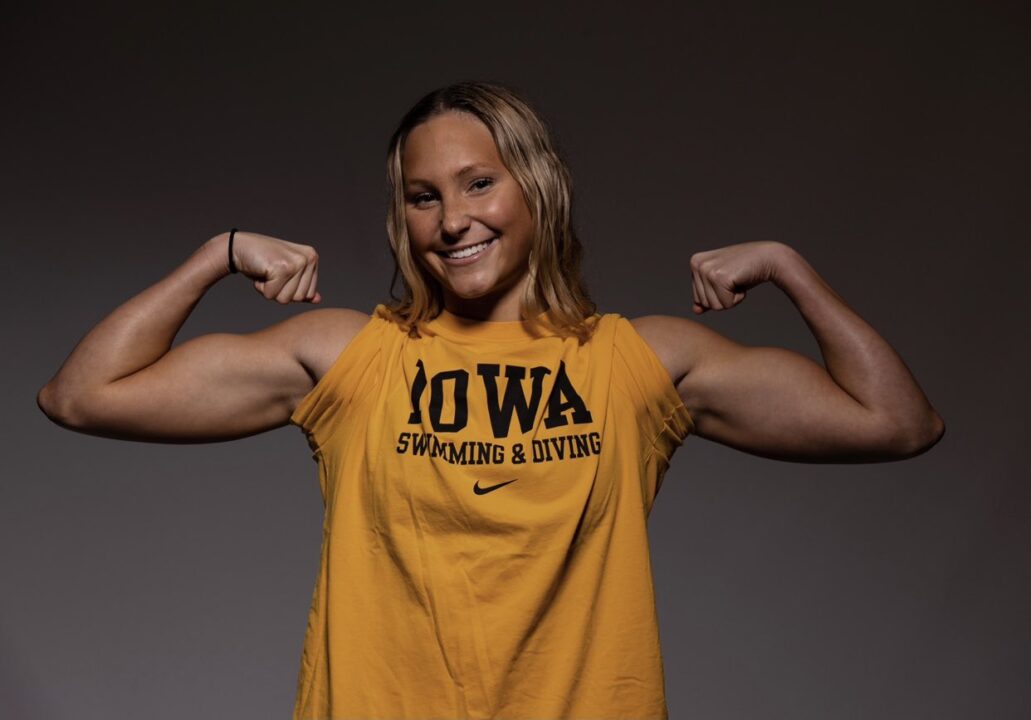 Senior Scarlet Martin has switched her commitment plans from Florida to Iowa for the fall of 2022 following her 3-peat of the 100 fly at Iowa HS state. Current photo via Scarlet Martin

Scarlet Martin from Coralville, Iowa has announced that she’s switched her commitment to the University of Iowa for next fall. Martin had originally committed to Florida as a junior last September.

Martin also competes in year-round club swim with the Iowa Flyers (IFLY) Swim Club. That means she has experience with new Iowa head coach Nathan Mundt, who was previously Martin’s coach at IFLY. In June, she competed at the 2020 (2021) US Olympic Trials Wave I and placed 24th in the 100 fly (1:01.67). Most recently, she competed at the Iowa Long Course Championships and won 3 events: The 50 fly, 100 fly, and 100 back.

Her best times (SCY) include:

Martin was the #20-ranked recruit in the high school class of 2022 at the time of her commitment, though she slipped out of those rankings by the senior class rerank.

Martin will add depth to any of the Hawkeye’s relays, as she would currently hold the top times in the 100/200 freestyle and and the 100 fly. Current Hawkeyes Kennedy Gilbertson (Jr.) and Maddie Black (So.) hold the top 50 free spots – 23.38 and 23.42, respectively – from last season’s Big Ten Championships. Gilbertson also holds the top time in the 100 back (53.92) from the conference meet, which was an NCAA “B” cut.

Iowa’s roster is significantly smaller than it’s been in past seasons. Iowa’s 2021-2022 roster only has 8 swimmers, sometimes leaving them unable to fill all the events at meets.

Prior to the beginning of the 2020-2021 season, Iowa announced that it would be cutting both its men’s and women’s swim teams. However, the women’s team was later reinstated in February due to Title IX concerns.

Things change! And with that being said, I’m switching my commitment to the University of Iowa! Thankful for this opportunity! Can’t wait to get to work! GO HAWKS🐤 pic.twitter.com/lmZaAq5Qj1

why she leave florida for iowa??

We’ll never know the real answer, but they have a new head coach since she committed, plus there’s a pandemic. I can think of about a billion plausible hypotheticals about why that might change her decision. Change in scholarship offer, closer to home, didn’t click with the new coach at Florida, burned out on swimming and wants a more casual experience, really likes the new Iowa head coach, etc. etc. etc.

Better to be the head of a chicken than the tail of an ox perhaps? Could see ways it makes sense. Wishing her the best!

It might be as simple as the total net cost of attendance. I doubt that Nesty could/would offer her a full ride. With lower cost of instate tuition and driving home vs flying home, it wouldn’t be hard for new coach to pitch a better financial package to parents

I wish I had her muscles

Here for it. #poweredbycorn sounds like a built-in NIL deal waiting to happen.

Woot! Woot!! Look at those strong Iowa girl arms!! Best of luck to her as a Hawkeye!

Wasn’t the Iowa program cancelled at the time of her original commitment anyway.