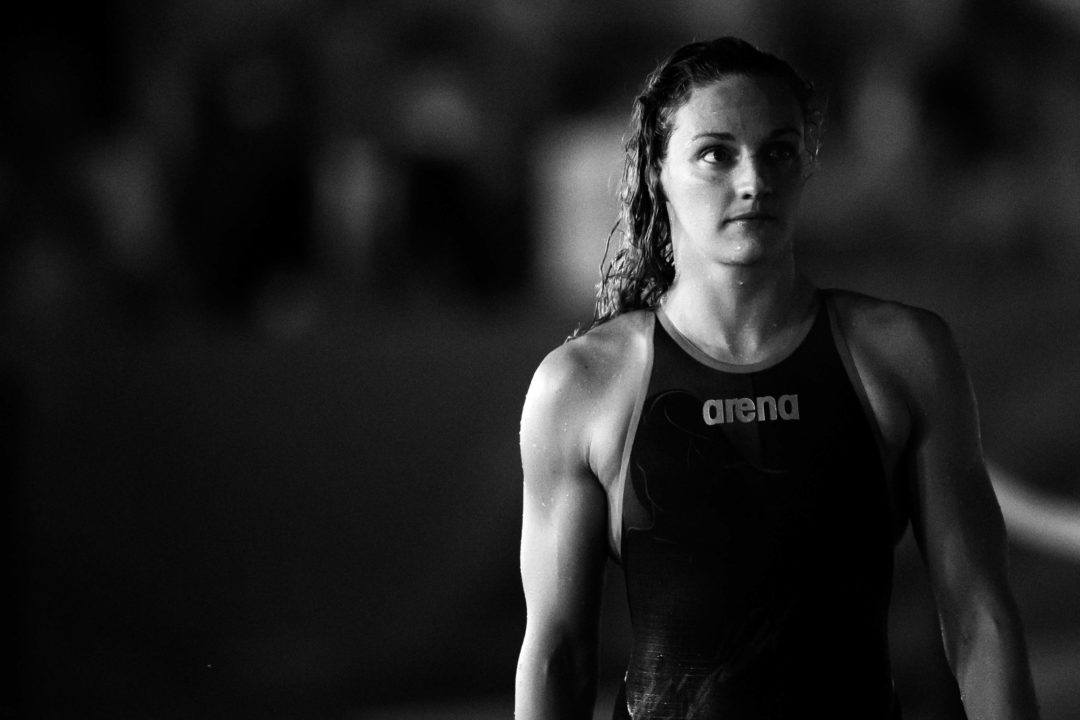 The reason LA didn’t select backstroke for the men’s skins: Guilherme Guido. He continues his dominance here with another 100 back win

Day 2 was filled with more stellar performances across all 4 teams, resulting in a London Roar win ahead of 2nd place LA Current (pictured: Sakiko Shimizu)

London Roar is now 2-2 in match wins. Match 5 was a closer race, with LA Current finishing in 2nd by 21 points and the Tokyo Frog Kings in 3rd by 32 points.

Katinka Hosszu, with the support of 29 other professional swimmers around the globe, launched a professional swimmers union called GAPS (Global Association of Professional Swimmers) in early July of 2017, a few weeks before the FINA World Championships in Budapest, Hungary. Since then, 8 more pro swimmers have joined GAPS, bringing the total number of active members to 38.

Here are the 8 new members of GAPS:

Of those 8 new members, several are Olympic and world champions. Ruta Meilutyte is a former world record holder in the 100 breast, and is an Olympic champion. Gabriele Detti is the 2017 world champion in the 800 free, and a 2-time bronze medalist at the Rio Olympics. Cameron McEvoy is not an Olympic or world champion, but has won many international medals, including 2 Olympic and 4 world champs medals, and went the fastest 100 free in history outside the super-suit era.

GAPS says its mission is for swimmers to have a voice in the future of the sport and rules changes that are being considered. GAPS was formed after Katinka Hosszu released a lengthy letter tearing into FINA and calling for swimmers from around the world to come together to make their voices be heard. Hosszu wrote the letter following FINA’s World Cup rules change, which allows Olympic and World medalists to bypass prelims and advance straight to finals, and limits athletes to 4 individual races per leg of the World Cup. The latter change was seen by many as directly against Katinka Hosszu, who is nicknamed “The Iron Lady” because of her versatility across a wide range of events. However, Hosszu was angered by the automatic advancement to finals as well, stating in the letter that “I don’t want to automatically advance to the finals of the World Cup… I want to race for finals spots with young talents… and if they are better than me at the age of 14, let them show their talent”. She also states in the letter that these rules changes are harmful to the sport, hurting its future by keeping young swimmers at a disadvantage until older swimmers retire. You can read Katinka Hosszu’s full letter here.

It took about a week after that letter was released for Katinka Hosszu to announce that she and 29 other professional swimmers had formed GAPS in the hopes that they would have more of a say in the future of the sport.

That original list contained swimmers from 15 different countries, 15 Olympic champions, and 47 Olympic Medals between them.

With the addition of Ruta Meilutyte of Lithuania, GAPS now has members from 16 different countries. These 8 new members add 6 more Olympic medals, 2 gold and 4 bronze, to the total. So now less than 4 months after GAPS was launched, the organization represents 38 professional swimmers from 16 different countries, including 17 Olympic champions, and 53 Olympic medals.

If you are interested in learning more about GAPS, you can visit their website here, where you can sign up in support to receive updates on the organization.

Interesting to see if any swimmers from Asian countries will join, besides Hagino. I’m not sure why it’s interesting. It just is lol

Doesn’t seem like a thing China would be too thrilled about, but I could be speaking out of my butt here.

This is pretty great tho.

Hagino isn’t inside the group presently, but Shioura is.
https://swimmingprofessionals.org

As of 2020, the link to their website leads to a “domain is for sale” page. It is sad to thing that the union did not get more support from the top swimmers, particularly in the USA, which is an abysmal place to be a swimmer. All of these American swimmers understand how the sport chews up and spits out athletes with no real opportunity for sustainable pay for performance — instead it’s about chasing after the few big endorsement deals that mainly come in the USA from the Olympics. The so called “fact on the Wheaties box” justification of a lifetime of not just training and training and training, but also paying and paying and paying. The cost of… Read more »