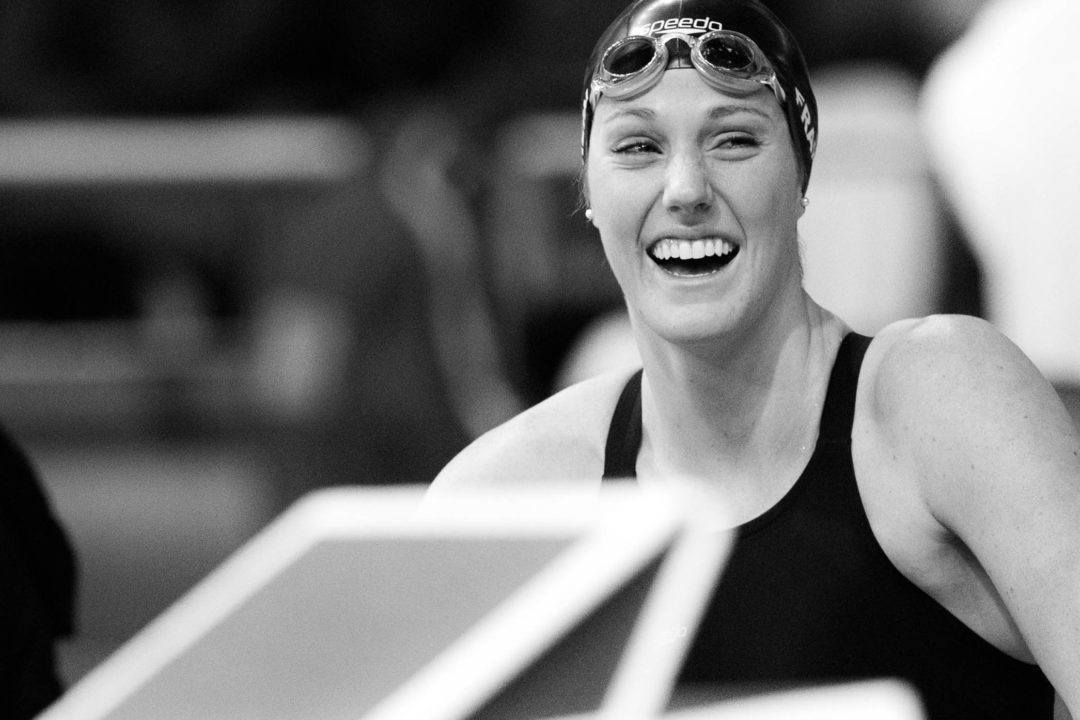 The duo got engaged in September 2018 and have been extensively documenting their wedding planning on social media since. Franklin started putting up popular “Wedding Wednesday” posts on Instagram, revealing details of the event every week in the lead-up.

Photos of the event are starting to trickle in, mostly from the photographers on hand. One post suggested People Magazine has exclusive access to the rest of the photos.

Olympians Hali Flickinger and Cierra Runge, as well as Cal’s Kristen Vredeveld were among Franklin’s bridesmaids. Elizabeth Beisel, as well as Josh Prenot and his wife Tiffany, were also in attendance (and likely lots more swimmers who have yet to post on social media).

Franklin swam two years for the University of California, Berkeley before turning pro in 2015.

She made the 2016 U.S. Olympic team but didn’t medal individually; Franklin took gold as a prelims swimmer on the 4×200 free relay. She had double shoulder surgery in early 2017 and later that year started training with the men’s professional group at Cal. She would later move to Georgia to start a comeback run with that pro group, but missed USA Swimming’s National Team and travel teams in the summer of 2018.

She announced her retirement with a long-form letter on ESPNW in December of last year that detailed her post-2012 battles with “shoulder pain whenever [she] tried to train or compete, depression, anxiety and insomnia.” It also included that she “began to realize that [her] greatest dream in life, more so than Olympic gold, has always been becoming a mom.”

Johnson, who swam for Nashville Aquatic Club before the Longhorns, is currently president of Swimmingly, an app aimed at streamlining the organization of swim meets. In his swimming days he qualified for both the World Youth Championship and National Junior Team. He competed at the 2008 and 2012 U.S. Olympic Trials and was a finalist at the 2009 World Championship Trials. He also won an NCAA title with Texas before he graduated in 2012.

was the wedding sponsored by Sony?

What does Missy do now that she’s retired from swimming? Is she working for Speedo in public relations or something like that?

Did she finish college or still working on her degree?

From her social media, it looks like she was full time wedding planning with some appearances sprinkled in for the past 6 months or so. It will be interesting what she does now. She’s made statements about wanting to have children, so maybe that will happen soon.

With those genetics and legacies, there’s got to be some great recruiting battles coming up in 20-30 years.

the science of improving a human population by controlled breeding to increase the occurrence of desirable heritable characteristics. Developed largely by Francis Galton as a method of improving the human race, it fell into disfavor after the perversion of its doctrines by the Nazis. ”

Lucky we. Otherwise we would never see the world record of 6’2″ Franklin crashed by 5’7″ Regan Smith.

You say that word, I do not think you know what it means

Laughed pretty well at that.

Might be an interesting study – to see if relationships in the 80’s 90’s brought a statistically notable list of current/potential stars.

Only one I can think of is Gus Borges (dad obviously Michigan, mum Florida). Sure there are others though.

Also, huge congrats to Missy, didn’t get back in time to edit the first post.

Yes. Both parents swam at USC, interesting he came to Cal (although he is clearly thriving in NorCal).

i think he has been at least 48.8 flat start

David and Emma McKeon are the children of swimmers – Susie and Ron swam at the Commonwealth Games together, Ron was an Olympian and their uncle is Rob Woodhouse (Susie’s brother).

His wife is Mary Keating, of the swimming Keatings. I assume she swam at some point in her life being from the Keating family, but I don’t know of any grand national or international accolades earned by her in the pool.

Thanks dunc1952. I didn’t see anything about hey actual accomplishments beyond that she was a swimmer.

They had a healthy baby very shortly after 1976 Olympics who later did some swimming butwould have been 12 at the collapse of the DDR . Even if she was high DDR level , few wanted to or were given the opportunity to train for the new Germany . Also they divorced & later statements by Matthes were shitty.

Rob being the 1984 Olympic bronze medalist in the 400 IM, and general manager of the London Roar.

What a beautiful bride – Congrats and so thrilled she is doing well.

Agreed. Then he hulk smashes the cake, calls everyone a loser and throws a bouquet filled with blood vials.