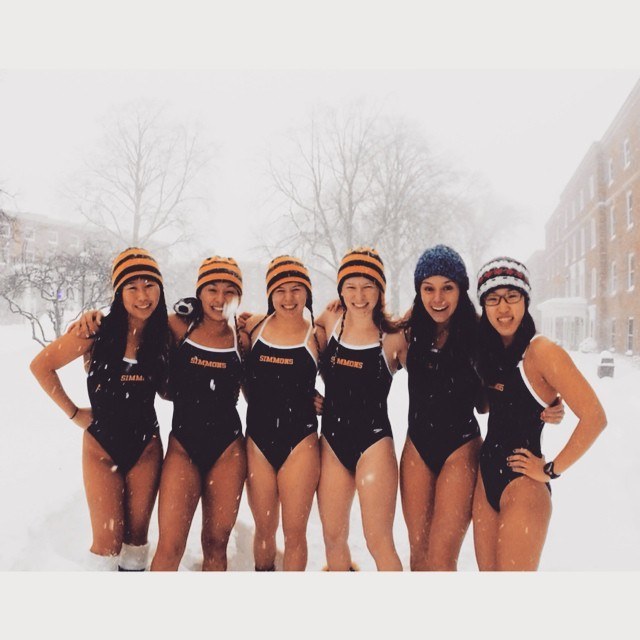 It's STILL cold outside.

This week is projected to be one of the coldest weeks in the continental United States in at least a generation, if not ever. The upper-midwest is the epicenter, with Chicago in reach of its second-coldest day ever and wind chills at least 50 degrees below 0: colder than Antarctica or Mt. Everest are this week, but most of the country will be impacted: an estimated 75% of the United States will see temperatures below zero this week.

Temperatures in some parts of the country will be cold enough for frostbite to set in in as few 5 or 10 minutes on exposed skin.

Needless to say, there’s going to be a lot of cancelled swim practices in the coming days, which can be tough timing with the spring championship season just over the horizon. So, if you’re in one of these frigid wonderlands, and are trying to stave off a premature taper, here’s 5 tips for how to keep your season on track:

1) Drylands – The most obvious thing to do: drylands! There are good routines all over the net, or you can ask your coach to send you one. The key to success here is to approach it like you would a practice. Don’t just haphazardly do some pushups when you’re bored; write down a routine, plan a time to do it in, and finish the entire workout – even if it’s hard. Just be sure that whatever you hook your stretch cord onto is screwed securely into a stud. Don’t rely on a towel rack. Alternatively, if you have a strong metal chair in your house, you can hook the stretch cord onto that – just pile up enough heavy things on the chair to overcome the rating of your stretch cords. Or better yet…stick with body weight. Probably a bad day to get kicked out of the house for putting holes in the walls.

2) Don’t “Boredom Eat” – You’re not hibernating, but research shows that humans have a natural proclivity to overeat in the winter. The best way to stave off bored eating: don’t get bored (see #1). Come up with a project to entertain you, reorganize your closet, I dunno, you know what makes you bored. Just don’t do it! Soup is a great meal for times like this – lots of vegetables, a good hot meal on a good cold day, and most soups are low in calories, so if you go digging through the fridge for an afternoon snack, it won’t break the caloric bank.

3) Don’t SnowSwim – Did you read the above? Frostbite in minutes? Just because one of y’all got y’allselves on a T-Mobile commercial doing it (who is this??) doesn’t mean you needa be out SnowSwimming when the windchill is -55. Save that for when it’s 30 and warming back up from the overnight snow. More broadly: don’t do anything stupid. We need everyone back in the water safely when this blows past, and all of that extra energy has to be spent somehow. Revert back to #1 if you find yourself antsy.

4) Catch up on Schoolwork – I know, studying during a free day off? Sounds super lame. But, you’re not really sacrificing much (probably not many social gatherings going on when it’s that cold out), and you can earn some hours for later in the semester when you’re beat down by the grind. Make an investment in yourself.

5) Or…just swim! – It’s -53C (-60 Fahrenheit) in Winnipeg, and people still live there! But seriously. Ian Grunewald, head coach of the Sst. James Seals Swim Club in Winnipeg, posted these photos on Tuesday. The temperature (not the windchill) has to be colder than -50C or colder to cancel schools, and the pool never closes because rec centers serve as emergency warming centres (eh).

Or, and here me out on this, move somewhere else

Hey, that’s the warm up tank at the Pan Am Pool! Been there (when it was ~110 degrees warmer)

New side of the Pan Am, built for the second Pan Am Games Winnipeg has hosted. That steel pool is frigid, but STILL warmer than the walk from the parking lot to the front doors! Morning swimmers in Winnipeg are tough as they come!

How about taking a yoga class in a nice heated room?!