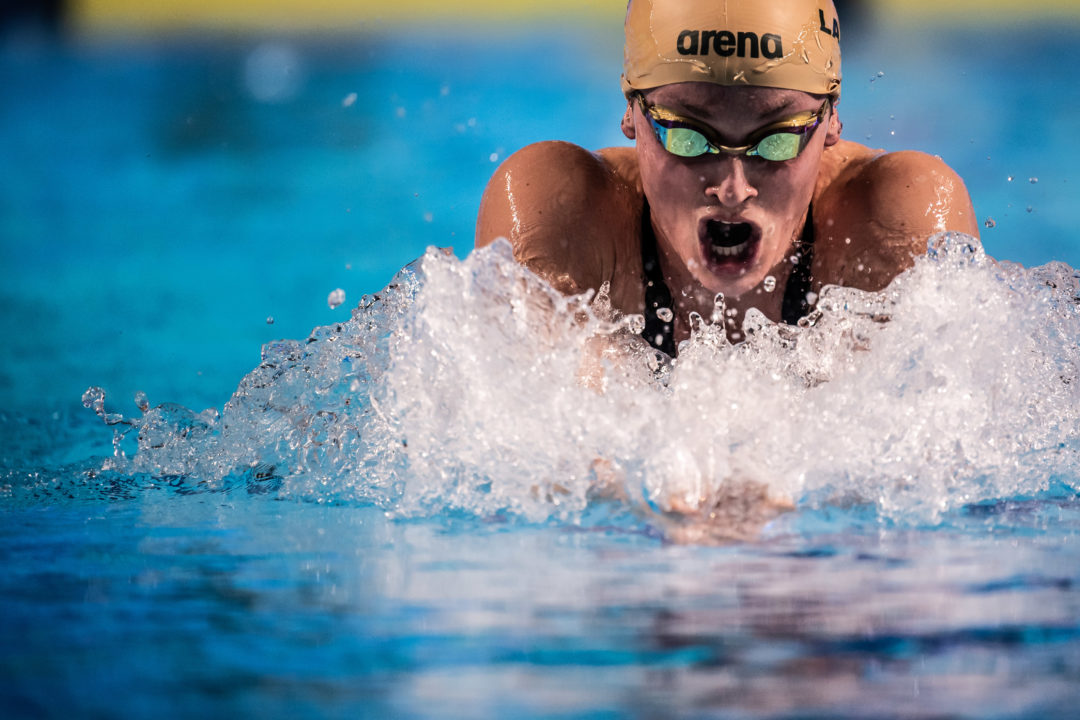 Lilly King won 34 consecutive races to begin her ISL career. But that run came to an abrupt halt with back-to-back losses today. First, King lost the 200 breast to London’s Annie Lazor – the two are actually training partners out of Indiana University in the U.S. Then, King was beaten in the 50 breast by Cali Condors teammate Molly Hannis.

A few other fallen win streaks:

The men’s backstrokes have been one of the most thrilling disciplines to follow this season. In the early goings, London surged, with Christian Diener and Guilherme Guido looking like a near-unbeatable duo. But Ryan Murphy has risen steadily for LA, winning two skins races (tied for the league-high in skins wins) and climbing up the league ranks.

Murphy beat Diener and Guido head to head in the 50 back today, passing up Diener for the ISL lead. He also won the 200 back over Diener and Luke Greenbank, and ended an unbeaten run by Cali’s Radoslaw Kawecki.

With three of the most likely teams to make the final (Energy Standard, LA, and London) loaded in men’s backstroke (Rylov, Kolesnikov, and Grevers for Energy; Murphy for LA; Guido and Diener for London), it’s hugely impactful that Murphy seems to be rising to the top of that group. One battle to watch for, though: Kliment Kolesnikov also seems to be steadily improving for Energy.

Earlier in the year, Abbey Weitzeil shaved a few hundredths off of the American record in the 50 free. But today, she obliterated her own mark by three tenths of a second.

23.45 is a big-time mark – not just in American history, but in the entire league ranks for the season. Weitzeil is now #3 in the league for the season and .15 off of the league leader. Australians and Europeans were pretty much dominating the world in women’s sprinting for awhile, but with Weitzeil’s vast improvements and Simone Manuel’s string of World and Olympic golds, the U.S. is starting to completely rewrite that narrative heading into the Tokyo Olympics.

Here’s a look at the top five performers in the ISL so far this year:

4. Nelson & Flickinger Step Up with Margalis Out

The Cali Condors were dealt a severe blow today, with the news that Melanie Margalis is leaving the ISL bubble and returning to the U.S. for personal reasons. Margalis was arguably the league’s best IMer, and her absence brings the Cali women much closer to the rest of the pack. Their unchecked dominance has made up for a weaker men’s roster so far, but the Condors will need others to step up to keep that women’s scoring high.

There were some small positives today. Beata Nelson was more than a second faster than her season-best in the 200 IM, and won the event. Margalis was ranked #1 in the league by seven tenths of a second, but Nelson is at least 5th now, and Cali should still have a shot to beat any teams other than Tokyo or New York in the 200 IM.

Meanwhile Hali Flickinger won the 400 free today in a season-best 3:59.78. She’s 4th in the league this year in another event where Margalis led the league ranks.

It wasn’t a great match for London today. They trail LA by 26 – a huge shift from their first meeting in match #5, when London led LA by 65.5 after one day.

One bright spot for the Roar, though, has been the rise of Freya Anderson and Anna Hopkin as a sprint duo. Anderson crushed a 50.7 freestyle split today, nearly running down Cali in the medley relay Anderson was also 51.7 on the free relay.

Hopkin has been less consistent, but did have a season-best 24.41 in the 50 free today. She led off the free relay in 52.2, close to a season-best.