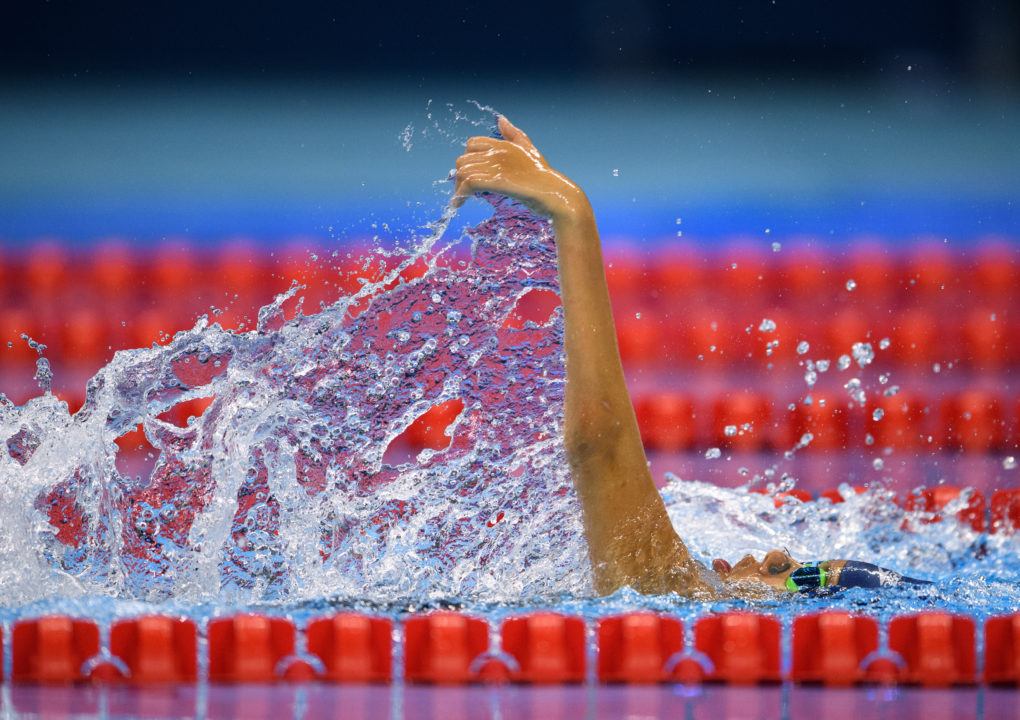 Paralympic gold medalist Yip Pin Xiu, PJG was recently featured by World Para Swimming for her impact on the swimming community aa an athlete and an activist. Archive photo via Bob Martin

Singaporean Paralympic gold medalist Yip Pin Xiu, PJG was recently featured by World Para Swimming for her contributions to the swimming community both as an accomplished athlete and as a former Singaporean Nominated Member of Parliament.

Yip has been swimming internationally for Singapore for over a decade, having raced at the 2008 Beijing Paralympic Games. There, she picked up a gold medal in the S3 50 backstroke along with a silver in the S3 50 freestyle. Yip also set new world records in the prelims of both of those events with a 57.92 in the backstroke and a 57.04 in the freestyle.

An accomplished swimmer, her feats in the pool are only a fraction of her success. Back in 2008, Yip was honoured as Her World Woman of the Year, a distinction given out by the Singaporean organization Her World to recognize “empowered and inspiring achiever women who are strong, successful, driven, confident and dynamic.” Yip won the award along with fellow Paralympic medalist Laurentia Tan. At the time, editor of Her World, Elisabeth Gwee explained that “both women left an indelible mark at last year’s Paralympics – Pin Xiu for winning Singapore’s first Olympic gold, and Laurentia for being the first Asian to win a Paralympic Equestrian medal in Hongkong. The judging panel felt they equally deserved the recognition for their outstanding achievements, which is why we’ve given the award to both of them.”

With her double gold medal performance at the 2016 Paralympics, Yip made history by becoming the most successful Singaporean Paralympian or Olympian with 3 golds and a silver. Following those Games, her and fellow 2016 gold medalist Joseph Schooling, were honoured by the Singapore Botanic Gardens’ Botany Centre which dedicated an orchid to each of them at a 2017 ceremony.

As a result of her enduring athletic career, Yip was selected in 2018 to serve as a Nominated Member of Parliament in Singapore. The position within the Singaporean Parliament was first introduced back in 1990 and exists to provide the House with additional non-partisan views. Yip was one of 9 NMPs nominated in 2018 and maintained the position until September of 2021. Yip has also been honoured with the Pingat Jasa Gamilang (the Meritorious Service Medal), given to those Singaporeans who have performed “service of conspicuous merit characterised by resource and devotion to duty, including long service marked by exceptional ability, merit and exemplary conduct within Singapore.”

Yip’s recent feature on World Para Swimming includes this video in which she discusses her role both as an athlete and as an advocate. She explains that part of her goal is to bring more attention to the Para sporting world. She goes on to say that she “feels a responsibility to give back to society” and that as “sports has given [her] so much in life, [she does] hope to see a Singapore that everyone lives a healthier and more active lifestyle.”

With her sites set on Tokyo 2020, Yip will have a shot at becoming the first athlete in her country’s history to win more than 4 medals at the Paralympic Games.