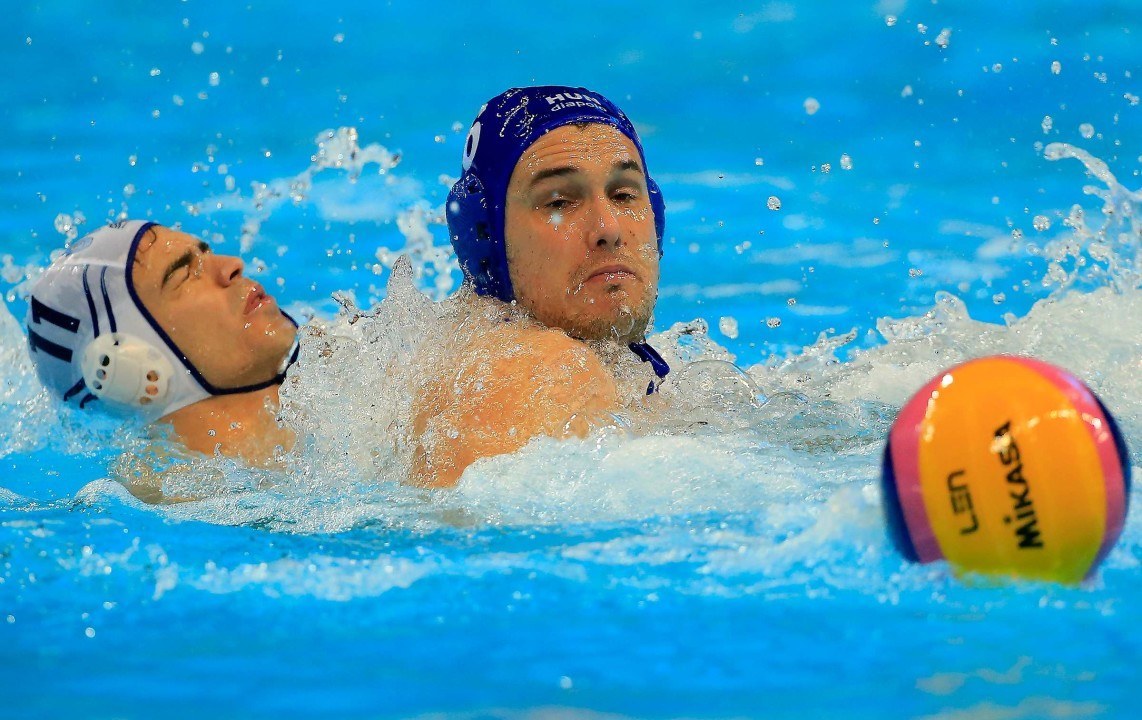 Greece bested a strong American team by a score of 16-11 to move on to the men's water polo semi-finals along with Italy, Croatia, and Spain. Archive photo via Dusan Zivkovic/Belgrade2016

The quarter finals of the men’s water polo at the 2022 World Championships happened Wednesday, featuring 4 games. The winners of the 4 quarter final matches move on to compete in the semi-finals on July 1, while the remaining teams will battle it out to determine the 5th through 8th place finishers on that same day.

In the first match of the day Greece bested the United States with a score of 16-11. The Greek were led by Stylianos Argyropoulos Kanakakis, who contributed 5 goals and one assist for the team, giving himself a 100% efficiency rating for the day by hitting every shot he took on the net. The US saw both Alexander Bowen and Ben Hallock score 3 goals, but the team struggled with a shooting average of 37%.

The game was tight through the first quarter, as the US maintained possession for a total of 5 minutes and 55 seconds, over 3 minutes more than Greece (2:05). Despite this, the Greek players managed to make the most of their time with the ball, managing to score 3 goals to take the early 3-1 lead. The US fired back with 6 goals in the second period, including 3 goals off of penalties, but they were unable to close the gap that Greece had established, ultimately giving the Greek the bid to the semi-finals match.

Croatia took the next match over Serbia with a score of 14-12, putting themselves in the position to match, or possibly better, their bronze medal finish from the 2019 World Championships. Despite lacking a standout player, the Croatians showcased the depth on their team with their victory as every eligible player on their roster, with the exception of the goalies, contributed at least one goal. Josip Vlric was one of four players on the roster to contribute 2 goals to the effort, shooting a perfect 100% average in the match.

Much like the match between the US and Greece, this match was extremely even, with the score switching between the two teams multiple times. A strong second quarter that saw the nation score on all three of its power plays helped give Croatia the slight edge in the match, ultimately leading to the team’s victory.

The tightest match of the day occurred between Spain and Montenegro, with Spain narrowly coming out on top with a score of 7 to 6. Both teams struggled to find the net throughout the match as Spain’s players combined for a shooting average of 38% and Montenegro players shot 24% in regular gameplay. However, Spain’s goalie Unai Agguire was extremely productive, saving 54% of the shots he faced in regulation gameplay. In comparison, Montenegro’s goalie Dejan Lazovic only saved 46% of the shots he faced throughout the match.

In the final match of the day, Italy held off Hungary 11-10 to advance to the semi-finals. The defending World Champions saw Francesco di Fulvio score a total of 4 goals and post 2 assists, contributing to half of the team’s points, while goalie Marco del Lungo posted a 55% save rate to help the team.

Despite struggling to score in “man-up” situations, Italy was led by a strong second quarter that saw the team score 4 goals. Notably, none of those goals came on power plays, all stemming from regular gameplay. Like Italy, Hungary struggled to hit the net on power plays, missing half of their shots. The team tried to make a push late in the game, scoring 4 of their goals during the 4th quarter, but came up just short.

With their victories, Italy, Spain, Greece, and Croatia will move on to the semi-finals, with the US, Hungary, Montenegro, and Serbia all playing to determine 5th through 8th place.

Japan easily beat Australia in the opening consolation match, coming in with a score of 15-7. The team was led by Kenta Araki, who held a 100% shooting average and managed to score 3 goals. Notably, Japanese goalie Katsuyuki Tanamura also had a strong day, posting a 72% save average, the highest out of all of the matches contested today.

In a similar fashion Georgia posted a dominant victory over South Africa in the second match with a final score of 20-7. With the exception of their goalies, every player on Georgia’s roster scored at least one point, with Andria Bitadze and Dusan Bazic each contributing 3 points to the team’s total.

Georgia and Japan will now play to determine the 9th and 10th place finishers in the tournament, while South Africa and Australia will battle for 11th and 12th.

Germany posted a 16-7 victory over Kazakhstan to come in 13th overall in the tournament. With the loss, Kazakhstan officially places 14th overall in the competition, the same place that they finished at the 2019 World Championships. The Germans saw a boost from Lukas Kuppers, who contributed 4 goals for the team, along with 2 penalty shots, and 1 assist. A majority of the team’s points were scored in the 4th quarter, where a total of 5 goals entered the net.

I’ve been searching YouTube for the replay but I can’t find it? Where can I find the replay please?

Doesn’t look like FINA has the most recent day’s match videos up yet.