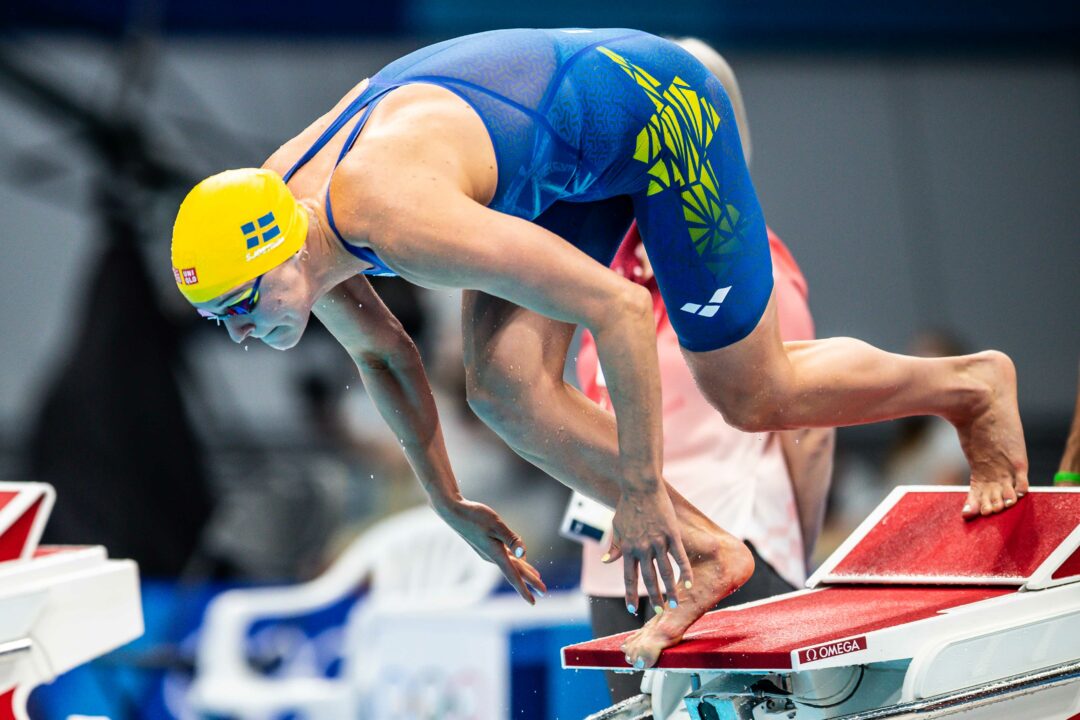 Sweden's Sarah Sjostrom has been simply unstoppable in this event for years, entering these Championships as the WR holder and 3x defending World Champion. Stock photo via Jack Spitser/Spitser Photography

Sweden’s Sarah Sjostrom has been simply unstoppable in this event for years, entering these Championships as the World Record holder and 3x defending World Champion in the event. Sjostrom holds the World Record at 24.43 and is the only swimmer in history to have broken 25 seconds in the women’s LCM 50 fly, a feat which she has accomplished 12 times in her career. In fact, Sjostrom has posted the 17 fastest times in history in the LCM 50 fly, and 23 of the 25 fastest performances in history are Sjostrom’s.

At the World Championships, Sjostrom has been dominant to say the least. In 2019, Sjostrom won the 50 fly world title by 0.33 seconds, a stunning 0.78 seconds in 2017, and 0.38 seconds in 2015. She comes into these Worlds as the fastest swimmer in the world this year by 0.44 seconds, having swum a 25.05 at the Stockholm Open in April. 25.05 is plenty fast enough to have won every previous World Championships, setting up Sjostrom nicely for a 4th-consecutive World title in the event.

Two of the most prominent swimmers in this event outside of Sarah Sjostrom are Egypt’s Farida Osman and China’s Zhang Yufei. Both seasoned veterans on the international scene, Yufei enters the meet as the 9th seed (25.66), right ahead of Osman (25.73). Osman has been 25.39 before, a time which she swam at the 2017 World Championships and which makes her the #11 performer all-time in the event. Now 27 years old, Osman won Bronze in the event at the 2017 and 2019 World Championships, and has won Gold in the event at the African Championships, All-Africa Games, Mediterranean Games, World Junior Championships, and Junior African Championships. Osman hasn’t quite reached her top times this year, having only been 25.73 in 2022. It’s a time that could potentially get her into finals, but with how deep this field is, 25.7 might not make it back.

Yufei is coming off a phenomenal performance at the Tokyo Olympics last summer. The 24-year-old superstar flyer won Gold in the women’s 200 fly and Silver in the 100 fly. While Yufei’s strongest event is the 200 fly, her 100 speed and aggressive racing style make her a force to be reckoned with in the 50 as well. She’s never won a medal at a major international competition in the 50 fly, however, Yufei has medaled in the longer fly events at the Olympics, LC World Championships, SC World Championships, and Asian Games.

Outside of Sjostrom, Europe is packed with incredible women’s 50 flyers. If anyone stands a chance of dethroning Sarah Sjostrom, it’s French national record holder Melanie Henique. The 29-year-old swam her personal best of 25.17 last summer, making her the 4th-fastest performer in history in the event. Out of the swimmers entered in these World Championships, Henique is the 2nd-fastest in the field, both in seed and in terms of personal bests. Having been 25.17, Henique is certainly a contender to win this event, and is one of the top medal contenders in the field. She’s been as fast as 25.57 this year, a mark which she’ll probably need to better in Budapest to medal.

Fellow Frenchwoman Marie Wattel is the #5 seed in the event, coming in with her personal best of 25.51, set in February of 2021. Wattel was only 26.04 at the French Nationals earlier this year, but having a 25.5 under her belt makes the 25-year-old a formidable competitor at these World Championships.

Denmark’s Emilie Beckmann, another 25-year-old, comes in as the 4th fastest seed, having swum a personal best of 25.50 in March of 2021. The bulk of Beckmann’s international success has come in the 50 fly, specifically at the European Championships. At the LC Euros in 2018, she won Silver in the event, as well as a Bronze in 2020. Similarly, she won Bronze at the SC Euros in 2019, and Silver in 2017. Based on previous World Championships results, Beckmann is a strong contender to make the final in Budapest, and a small personal best in finals could lead to her first World Championships medal.

The Netherlands are sending a dynamic duo in the women’s 50 fly, similar to France. Maaike de Waard, a 25-year-old, has been as fast as 25.76, and has swum a 26.04 this year. Dutch teammate Tessa Giele swam her personal best of 25.96 earlier this year.

Behind Sarah Sjostrom, Sweden has an excellent #2 in Sara Junevik. The 22-year-old has been 25.84 before putting her in contention to advance to finals in Budapest. Junevik doesn’t have a ton of individual experience at the senior international level, but she won the 50 fly at the 2018 Summer Youth Games, earned Silver at the 2017 World Junior Championships, and won Silver and Bronze at the 2016 and 2017 European Junior Championships.

Greece’s Anna Ntountounaki comes in as the 7th seed, entered with her personal best of 25.65. Ntountounaki is primarily a 100 flyer, having won Gold in the event at the 2020 LC European Championships, and finished 9th at the Tokyo Olympics last summer. However, she’s displayed an ability to swim a mid-25 in the 50 fly, making her very much live to advance to finals in Budapest.

Some of the youngest competitors in the field, the U.S. is sending 17-year-old Claire Curzan and 19-year-old Torri Huske to Budapest in the 50 fly. It’s the same duo that represented Team USA in the 100 fly at the Tokyo Olympics last summer, which resulted in a 4th place finish for Huske and 10th for Curzan.

Curzan enters the meet as the #3 seed, having swum a speedy 25.49 at the U.S. International Team Trials in late April. If there’s anything we’ve learned over the last several years of watching Curzan’s young career, it’s that she can put up incredible performances on any given day at any meet. Already having Olympic experience under her belt, Curzan is a serious medal threat at her first World Championships.

Huske was a little slower than Curzan at the International Team Trials in April, swimming a 25.65. That stands as her personal best and makes her the #6 seed coming into the meet. Huske was 4th in the 100 fly in Tokyo last summer, and she’s known for taking the 100 fly out fast. If she’s able to translate some of that early 100 speed into this 50 fly in Budapest, she shouldn’t have a problem advancing to finals, and could even end up with a medal.

I think that Yufei can get a medal here. she has a really busy schedule, but her pb is an opening split in the 100fly at the olympics, and she’s got the right speed for the 50fly because she also has a 24 low in 50 free

This is probably the biggest surety of the meet. Pretty remarkable to consider that she has been on top of the world in one event or another since 2009 and shows no signs of slowing.

Her record is 24.4, she’s been under 25 many times, she’s got the 17 fastest times in history, and if she weren’t Sarah Sjöstrom, the 25.05 she swam at the Stockholm Open already this year would make her the second-fastest performer in history behind Sarah Sjöstrom.

swimming a 25.68. That stands as her personal best

I MISS YOU RANOMI

Junevik has to be the biggest dark horse in my opinion!! Finally, starting to hit her stride in the seniors (6th at euros last year) after an excellent junior career (YOG Gold)…

dark horse to make the final***

Sjostrom has this is in the bag. Her best time this season is still better than the PB of anyone else in the field.