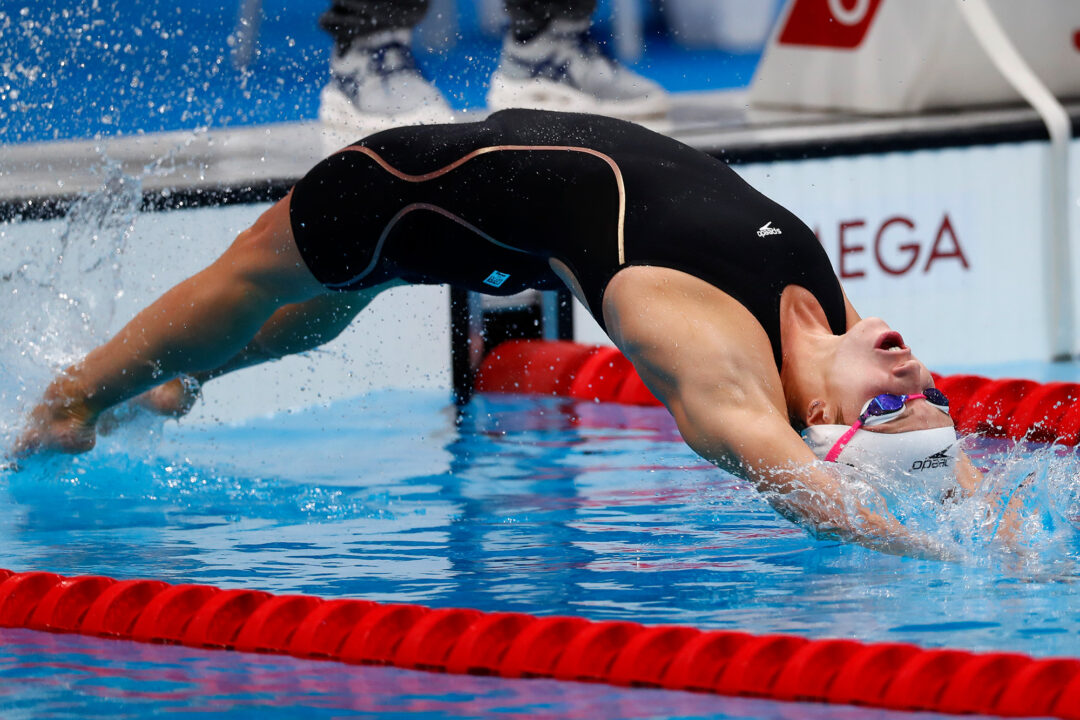 Seven out of last years A finalists are entered in the event again this year. American Record holder Regan Smith joins the mix as well. Archive photo via Speedo USA

Last year’s final of the 200 backstroke had no seniors, and seven out of the eight A finalists are entered into the race again this year. The biggest change is the addition of Stanford freshman Regan Smith who is the top seed, and sixth place finisher last year Katharine Berkoff has opted to not compete in the event as she is swimming the 50 freestyle, 100 freestyle, and 100 backstroke instead.

Both swimmers that qualified to represent the US at the Olympics in the 200 backstroke are also entered into this event, and they went 1-2 in the event last year. Those two names are Wisconsin sophomore Phoebe Bacon and Alabama senior Rhyan White. Bacon won the event last year in a time of 1:48.32, and White was right behind touching in a 1:48.99.

Making things even more complicated, White and Cal sophomore Isabelle Stadden competed in the short course meters (SCM) version of the event back in December 2021 at the Short Course World Championships. Stadden was third in the event at last year’s NCAAs, touching in a 1:49.66 behind Bacon and White. At the SCM World Championships, White swam to gold in a time of 2:01.58 and Stadden earned bronze in a time of 2:02.20.

Outside of competition between swimmers from the US, Stanford junior Taylor Ruck has shown her ability to represent Canada at the International level and achieve success. Ruck was sixth at the 2020 Tokyo Olympics in the 200 LCM backstroke in a time of 2:08.24. She finished just behind White who was fourth in a 2:06.39 and Bacon who was fifth in a 2:06.40.

Virginia’s Reilly Tiltmann was fifth in the event last year dropping almost two seconds off of her seed time, and she has already been faster this year than she was at the end of last year. Tiltmann has changed up her event schedule slightly, switching from the 100 butterfly last year to the 200 freestyle this year. This may show that she has gained some endurance which could help her in the 200 backstroke as well.

Virginia Tech sophomore Emma Atkinson was fourth in the event last year swimming a time of 1:50.43. Her seed time this year of 1:50.64 is slightly off that, but is exactly a second faster than what she was entered in last year (1:51.64). Atkinson has switched up her events in the opposite way compared to how Tiltmann has as Atkinson has switched from the 500 freestyle, 100 backstroke, and 200 backstroke to the 200 freestyle, 100 backstroke, and 200 backstroke. The biggest difference here is that both the 100 backstroke and 200 freestyle are on day 3 instead of the 500 freestyle which was on day 2. This does not spread out the events as much, but it is hard to tell what exact effect it could have.

Stanford junior Lucie Nordmann did not compete in a meet last year but was fifth in the event back in 2019, swimming a 1:50.70 in prelims and a 1:51.10 in finals. She has already been faster this year than she was two years ago, and also swam faster in prelims than finals at this year’s Pac-12 Championships, which may help her slip into the A final here at NCAAs.

So according to Stanford stan account, RMS, Smith shouldn’t win because she didn’t make the olympics in this event.

One of my most confident picks. Regan has got this thing!

Not really… Sub Ruck’s best ever split for Canada’s worst split and they’re still 1.34 seconds off the Aussie relay.

White beats Stadden at NCAAs, Trials, and SCM Worlds and has a significantly better PR…certainly a curious pick.

Agree – this is definitely a hot take pick. White was right there in the fight for medals in both of the backstrokes in Tokyo and has consistently proven that she is the U.S.’s second best backstroker on the international stage right now.

Gettin’ jiggy with it!

Glad I’m not the only one who read it that way first.