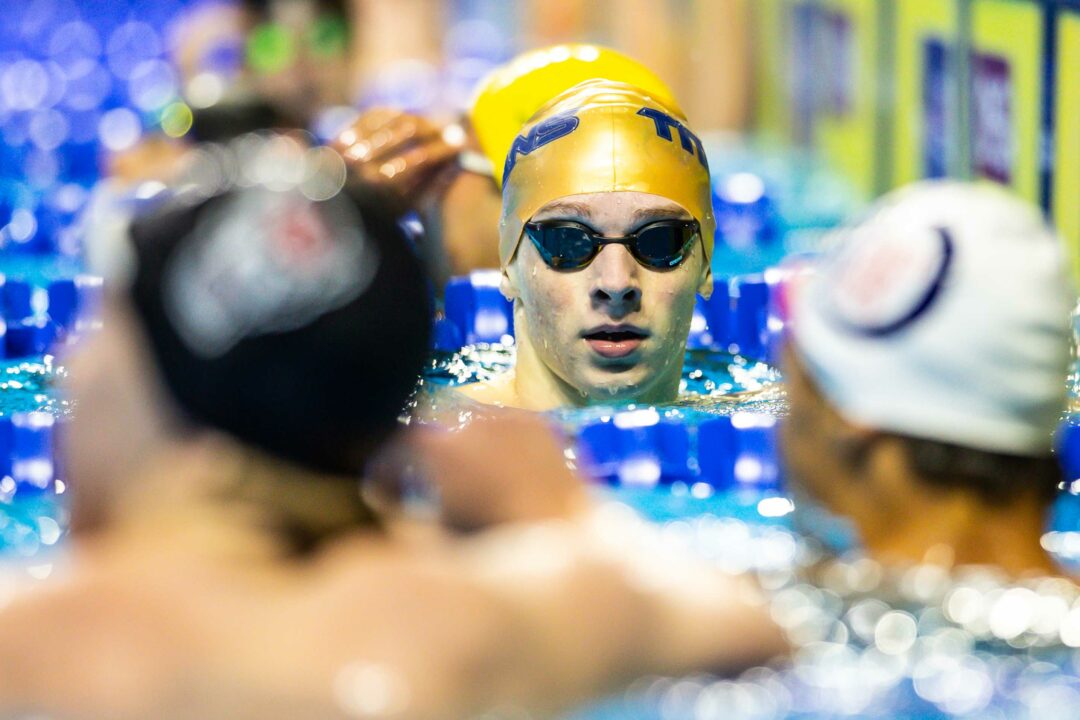 NC State commit Michael Cotter of the TAC Titans was one of many swimmers who nabbed personal bests on the first night of the Cary Sectionals. Current photo via Jack Spitser/Spitser Photography

The Cary Sectionals, one of three sectional meets taking place across the country this week, had a soft opening tonight with timed finals of the 1000 free and the 800 free relay. While we didn’t see any major fireworks — those could come later — there was still some great racing during the first session of the competition.

The night got underway on the women’s side with a big win from 17 year-old Emma Hastings of East Coast Aquatics. The NC State commit couldn’t quite match her lifetime best of 9:47.11, but that didn’t matter as her time of 9:53.15 was enough to win by over 11 seconds. Mecklenburg Swim Association’s Leyla Sleime knocked roughly nine seconds off her previous best to take 2nd in 10:04.40, followed by SwimAtlanta’s Sydney Starnes (10:05.12).

The men’s 1000 free saw a trio of athletes get under nine minutes. French national Nicolas D’Oriano is swimming with Wolfpack Elite, and he made the most of what appears to be his first-ever swim in this event, taking the winning with a 8:53.14. A pair of teenagers battled it out for 2nd, as SwimAtlanta’s Tristan Denbrok beat Lance Norris of the TAC Titans, 8:58.72 to 8:58.87. That was a lifetime best by over 26 seconds for Denbrok, while Norris shaved two seconds off of his best to also get under nine minutes for the first time.

Perhaps the biggest story of the 800 free relay was what didn’t (officially) happen. We don’t have final results, and Meet Mobile doesn’t show splits on DQ’d relays, but apparently Claire Curzan led off the TAC Titans’ ‘A’ relay in 1:42.4 before the relay was DQ’d on a subsequent exchange.

If that’s accurate, that’s a new personal best for Curzan, whose current best is a 1:43.79 from just two months ago. That could be a harbinger of things to come over the next few days for Curzan, who was swimming lights-out last weekend at the Westmont PSS.

With a limited schedule tonight, we didn’t to see all of the big names swim, but keep an eye out for national teamers like Coleman Stewart and Madison Kennedy over the next few days.

The time should stand.
So long as the lead-off swimmer completes the stroke and distance, and was not the reason for the relay DQ, the time stands, per USA swim rules

Funny you mention that at the time when cielo broke the South American record in prelims in Beijing 2008, he did it leading off a relay that was DQed but his record was allowed to stand

NC State loading up on 200 free swimmers. We see you

Amazing swims by Curzan & Cotter. Cotter’s fellow NCS commit Jerry Fox dropped a swift 1:37.0 leading off TAC’s B relay. Dude was 1:43 one year ago! I see you Jerry…

thanks for the info. she was clearly best of all the olympians she raced in Westmont