2022 U.S. Trials Previews: Finke Stands Ahead of the Field in the 800 Freestyle 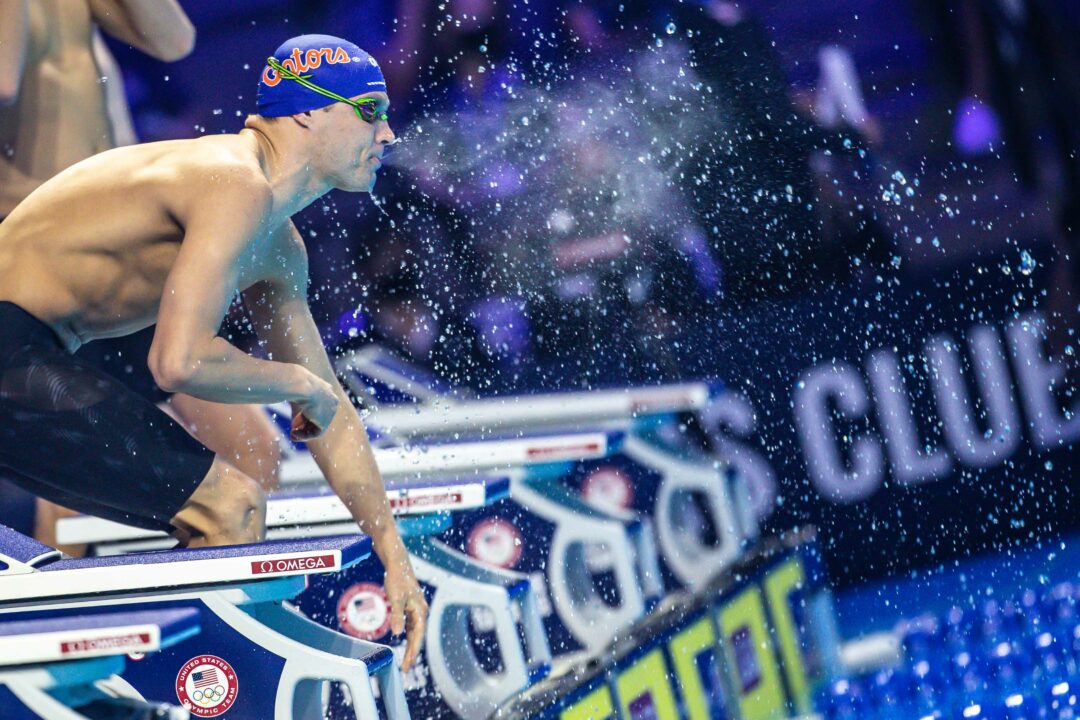 After claiming Olympic gold in Tokyo, Bobby Finke is the clear favorite to make the World Championship team in the men's 800 freestyle. Archive photo via Jack Spitser/Spitser Photography

Like the men’s 1500 freestyle, the winner in this event seems pretty clear-cut.

Since 2018, Bobby Finke has been the only US man under 7:43, posting a time of 7:41.87 to break the American Record at the 2021 Tokyo Olympic Games. The reigning Olympic gold medalist, Finke also swam under 7:43 one additional time at the Olympics last year.

This season, Finke already holds the top time in the country with his 7:54.07 from the US Open. Given that, plus his previous accolades, this appears to be Finke’s race to lose.

With Finke’s dominance in this event, the race for second appears to be much tighter with multiple contenders within reach of a spot on the World Championships team.

Currently, NC State teammates Ross Dant and Will Gallant hold the 2nd and 3rd seeds in the event with times of 7:50.66 and 7:53.76, respectively. Dant just missed making the Olympic Team last summer, finishing 3rd in both the 400 and 800 freestyle, meaning he’ll be coming for vengeance this season. Coming off of a fairly successful NCAA season that saw him finish 3rd in the 1650 freestyle and 8th in the 500 freestyle at the National Championships, Dant looks to be in a good position to pursue a spot on his first major US International Team. Gallant, like Dant, also came pretty close to qualifying for the Olympics last summer, qualifying 1st in the 800 freestyle prelims at Trials before falling to 5th in the finals. He recently placed 2nd in the 1650 free at NCAAs, and could push for a spot in the top 2.

4th seed Charlie Clark may have the highest ceiling of anyone besides Finke. Clark dropped a huge best time of 7:54.40 at the US Open to take second behind Finke, challenging him for most of the race. With his time, he currently ranks 2nd in the country this season in this event, ahead of everyone but Finke. After not finaling in this event at Olympic Trials last season Clark seems primed to contend here, having dropped his best time from a 7:58.50 to a 7:54.40 since then. If he can continue his upwards trajectory, Clark seems primed for a breakout season in the long course pool.

Another notable name to keep an eye on is David Johnston, who has also been rising through the rankings in the short course pool this year. The University of Texas swimmer posted top-7 finishes in the 400 IM, 500 freestyle, and 1650 freestyle at NCAAs this year, swimming best times in all three events throughout the season. Most notably, Johnston shaved over 8 seconds off of his personal best in the 1650 freestyle at the American Short Course Championships, giving himself an NCAA A-cut in the process. Given his recent success in the short course pool, Johnston seems like a likely candidate for drops in the long course pool, as his personal best in the 800 freestyle currently stands at a 7:57.94 from last summer.

There are several other swimmers who could also push for the second roster spot here. Florida star Trey Freeman hasn’t hit his best time of 7:56.53 since 2018, but has been training alongside Finke and Katie Ledecky under a revived distance program at Florida. In addition James Plage just had a solid NCAA season at NC State that saw him post a best time in the 500 freestyle, which gives him good momentum coming into this meet 18-year-old Alec Enyeart appears to be the top age-grouper in the race, holding a best time of 8:00.82. If Eyteart can dip under the 8:00 barrier, expect him to compete for a spot in the finals.

Brennan Gravley is another name to watch out for as he has also been training alongside a strong Florida distance group. However, he appears to be focusing more on open-water as he recently won the 5k at the US Open Water National Championships and was also the top finisher in the 10k. Given his performances, Gravely may already have a spot on the roster so he may not be fully rested here. Also keep an eye out for Texas swimmer Luke Hobson, who’s seeded well-back in 24th with his short course time of 8:43.66. Hobson didn’t even contest this event at Olympic Trials last summer, holding a best time of 8:16.72 from 2020. However, he’s dropped multiple best times in the short course pool this year, including a 3rd place finish in the 500 freestyle at NCAAs. With these recent successes, Hobson appears to be in for major drops this summer.

There are also several notable absences from this meet, which could factor into the qualification. Currently, only Finke, Jordan Wilimovsky, Michael Brinegar, Zane Grothe, and Dant have been under the FINA-A cut of 7:53.11 during the qualifying period that began on March 1, 2019. Without Wilimovsky, Brinegar, and Grothe at the competition, there’s a chance nobody else hits the A-cut. In that case, the second spot would go to Wilimovsky under USA Swimming selection procedures.

Dark Horse: Matthew Chai, FAST Swim Team – Another age-grouper who could have an impact on this event, Chai recently dropped a new personal best of 8:07.22 at the Fran Crippen Swim Meet of Champions. The Cal commit has been on-fire recently, seeing improvements across all of the distance events. With similar drops to what he has been seeing, Chai could be in contention for a finals berth and may be a strong contender for the Jr. Pan Pacs roster.

I wouldn’t count Trey Freeman out from at least being in the final and maybe even top 2. He dropped a lot of time in the mile this year at SECs and has a best time under 8.

Is this timed finals as well?