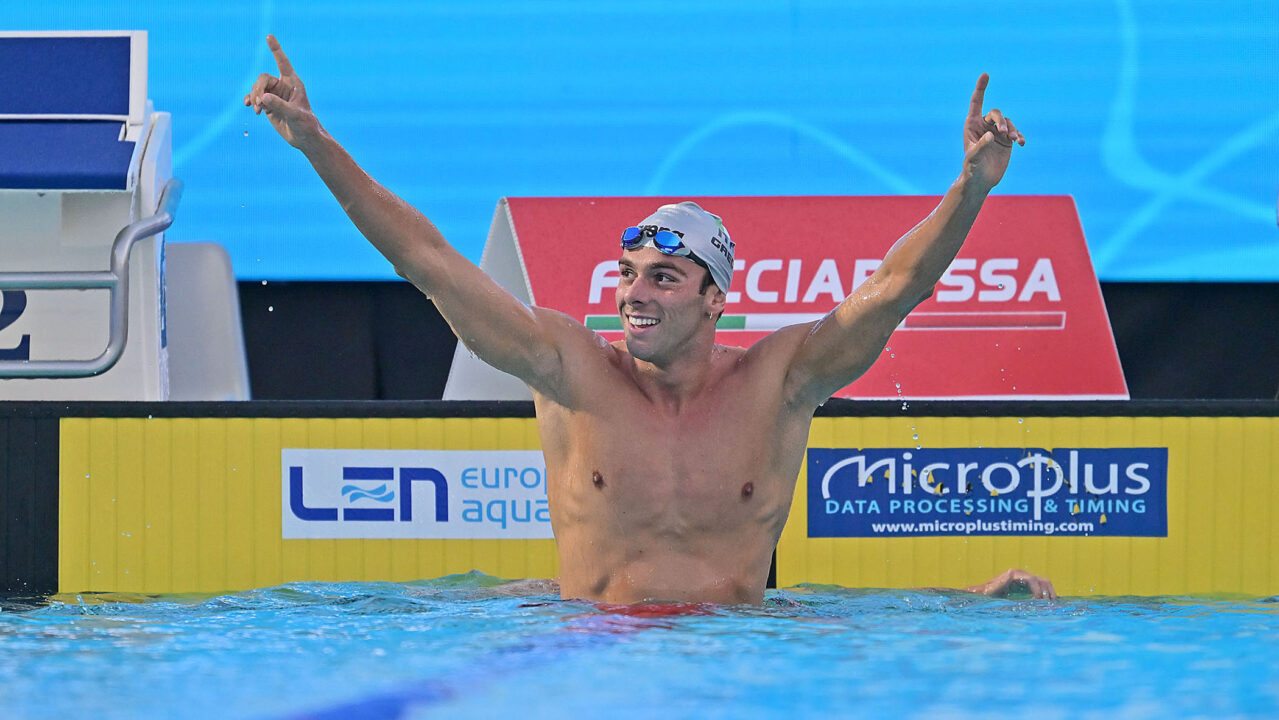 Perhaps the most anticipated final of the night is the men's 1500 free, where Gregorio Paltrinieri will attempt to win another Gold. Current photo via Fabio Cetti

There are two scratches to report for this finals session, both coming from swimmers in this morning’s prelims who have scratched out of semifinals. In the women’s 200 fly this morning, Poland’s Aleksandra Knop swam a 2:17.74 to finish 17th overall. Although she was 17th this morning, she was the 16th qualifier for semifinals, since Great Britain’s Holly Hibbott was ineligible to advance to semifinals as the 3rd fastest British swimmer in the field. In Knop’s absence, Switzerland’s Annina Grabher has been elevated into the semifinal tonight.

In the men’s 100 back, Ukraine’s Oleksandr Zheltyakov was the 16th qualifier for semifinals as well but has pulled out of the race. Spain’s Nicolas Garcia has been tapped for semifinals in Zheltyakov’s absence.

This should be yet another action packed finals session tonight in Rome. Perhaps the most anticipated final of the night is the men’s 1500 free, where Gregorio Paltrinieri will attempt to win another Gold. After his incredible performance at the World Championships in June, in which it appeared for a large portion of the race that Paltrinieri might break the World Record, he’ll get another run at it tonight. While it’s a lot to ask for him to repeat his performance from June, Paltrinieri did have a great race in the 800 a few days ago, breaking his own Championships Record. It’s a tall order, but Paltrinieri will be racing in front of a home crowd that will be cheering him on every stroke of the race.

33-year-old Hungarian veteran Katinka Hosszu is pulling a double tonight. One of the greatest women’s swimmers in history, Hosszu is first set to race in the women’s 200 IM final, where she will be looking to add a seventh-straight European Championships medal in the event. Hosszu won five straight titles from 2010 to 2018, and then fell to third last year as Israel’s Anastasia Gorbenko won gold.

Moreover, if Hosszu were to win a medal tonight, it would mark the 98th major international medal of her career.

She also swam the heats of the mixed 4×200 free relay this morning, meaning she could add a 99th medal if Hungary were to finish in the top three tonight.

After the 200 IM, Hosszu will be back in action in the women’s 200 fly, where she will be battling for a spot in the top 8. That could be a challenge after the 200 IM final, but there’s a solid break between swims, and Hosszu looked in control in prelims of the 200 fly this morning.

Speaking of the most decorated women’s swimmers in history, Sarah Sjostrom will be looking to add another European Championships Gold medal to her name tonight in the women’s 50 free final. The World Record holder in the event, Sjostrom will try to hold off Polish star Katarzyna Wasick one more time. Sjostrom was just 0.09 seconds ahead of Wasick in semifinals, so the race tonight should be exciting.

Italy’s Margherita Panziera will be looking to add another Gold medal to her name tonight. The 200 back champion from earlier in the meet, Panziera enters the final as the top seed, although it’s a tight field.

Hungarian superstar Kristof Milak is set for action in the men’s 200 fly final, which will kick off the finals session. The fastest 200 flyer in history, Milak has a clear lane to yet another European title in the event. While Milak is as close to a guarantee for Gold as we have in the sport, the battle for Silver should be a thriller, as Alberto Razzetti, Noe Ponti, Richard Marton, Giacomo Carini, and Krysztof Chmielewski were all 1:55s in semifinals.

Nicolo Martinenghi will be looking to complete his sweep of the breaststroke sprints tonight in the men’s 50 breast final. After winning the 100 breast and tying his Italian Record earlier in the meet, Martinenghi led both prelims and semifinals of the 50 breast, and will look to do so again tonight. It would be yet another breaststroke medal for Italy at these European Championships, where they have been downright dominant. Italy went 1-2 in the men’s 100 breast earlier in the meet, and could do so again here in the 50, as Simone Cerasuolo was 2nd in semifinals by a wide margin.

No preview for the relay?

Hungary will change the whole team hopefully Milák, Németh, Pádár and Ábráhám and they swim for the gold. In this case one more medal for Katinka (and the others).

But we have Mr. Sós, who made some nonsense relay moves over the years.

With that line-up, and Milak at first, to have a new PB/NR, or even under 1:45, Hungary are the favs.
No other team on women side has to 1:57 relay swimmers.
And this time, both girls could swim in smaller, or nearly in any wave at all.

Sos probably wants to help Katinka to get more medals, not realizing that the team won’t medal at all in this set-up. Other teams, like France, Italy, NL are way stronger

Sós is puppet. He knows swimming, but no as a coach or NATIONAL TEAM LEADER.

Where Holló? Márton will be dead after the 200 butterfly, he is not a Milak, to swim twice in a same session.

While Mészáros is TERRIBLE.

WITH THIS LINE-UP THEY WILL BE AT LEAST 4 SECONDS SLOWER, OR NOT 6.

I hope for a dsq, but Kozma is not here to f.ck up everything, because mr. sós already done that.

But Katinka doesnt deserve the medal as well. Hungary lost the gold thanks to here in women 4×200 free relay.

THIS NOT A JUNIOR MEETING, even though both girls are 16,5 years old.
You cannot race with a junior on the men side. Unless… Read more »

Katinka admitted she did not put in the work either (maybe Tusup wasn’t that bad at all as a slave driver). She is now negatively influencing the outcome of the whole team…

MÉSZÁROS, WHEN AND HOW IS GOOD??
He will get 3 seconds, while Ricsi will be washed up the 200 fly.

Sorry, I missed it, I thought abaut my line-up, not Mr Sós’s.