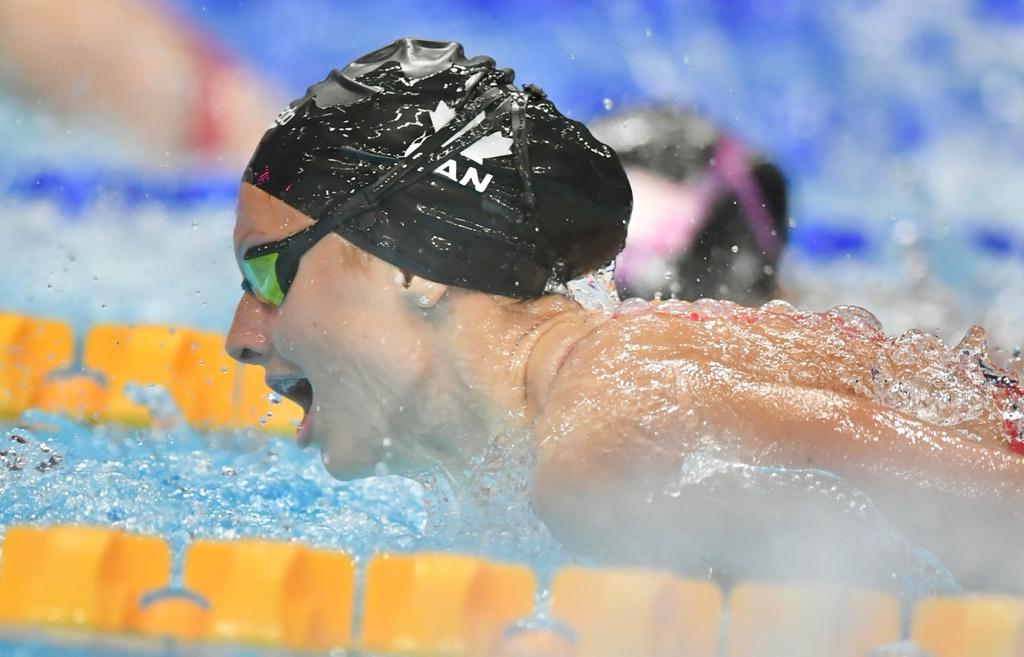 Summer McIntosh qualified for the final nearly five seconds clear of the field in the women's 400 IM, aiming to become the joint world and Commonwealth champ. Archive photo via Fabio Cetti

Daniel Wiffen cracked a new Irish record of 3:47.43 to lead the way into tonight’s final. However, he’ll have to deal with Elijah Winnington, the new World Champion and fifth-fastest performer of all-time. Even if Winnington doesn’t get close to his 3:41.22, he still should have a lot more in the tank after qualifying fourth here in 3:48.32.

Australia got all three of their swimmers in the final, with Mack Horton and Sam Short joining Winnington. Both Horton and Short were also off their personal bests in prelims. Wiffen will have his work cut out for him trying to fend off the the three Australians, who will be eager to start the meet off with a podium sweep.

Lurking further back is South Africa’s Matt Sates. Sates said earlier this summer that Commonwealth Games is his focus meet–after fighting an illness at Worlds, does he have a big swim in store here? Wales’ Daniel Jervis snuck into the final in eighth–look for him to make a move tonight.

It’s all Summer McIntosh in the women’s 400 IM. She added three seconds from her gold-medal-winning and “world junior record” setting swim from Worlds, but she’s still almost five seconds clear of the rest of the field. The 15-year-old phenom is the clear favorite heading into tonight, and it’s less about if she’ll win gold than what time she’ll do it in.

Behind her though, there’s a four women battle shaping up for the silver and bronze medal. Kiah Melverton sits second in 4:41.44, ahead of Ella Jansen, Freya Colbert, and Tess Cieplucha. Just over a second and a half separates these four, so each will have to be at her best if she wants to claim a step on the podium. If New Zealand’s Mya Rae Rasmussen can join in the fray, it’ll be an exciting final–even if there are two separate races happening.

If the Australian men don’t sweep the podium in the 400 free, look for Australia’s first podium sweep to come in the women’s 200 free. The trio of Ariarne Titmus, Mollie O’Callaghan, and Madi Wilson will be hard to break up, as they hold an iron grip of the first three seeds. Titmus qualified almost a second ahead her teammate O’Callaghan, in 1:55.68. That’s a few seconds off her best, but she no doubt will be faster in the final–will she break the world record? She got within .11 seconds of it last year, and having the race on day 1 of the meet is a huge advantage.

Freya Anderson and Erika Fairweather likely have the best chance of breaking up the Australian party. Anderson set a lifetime best and finished sixth at Worlds, so we’ll see if she can improve on that place tonight. Fairweather was diagnosed with COVID-19 halfway through Worlds, but if she’s recovered fully she should be a factor in the final.

Our first para swimming final of the night is the men’s s9 100 back. They didn’t race heats of this event during prelims, so this final will be our first look at the field.

Australia’s Timothy Hodge holds the top seed by over three seconds in 1:01.53. This seed time is actually under the world record of 1:01.65 set by Bogdan Mozgovoi at the Tokyo Games. In June, Hodge broke the 200 IM world record at the World Para Swimming Championships, finally breaking through and winning on the international scene. After being on the verge of breaking out for years, it seems like the floodgates have opened for Hodge–could we see him set another world record here?

With New Zealand’s Jesse Reynolds and Australia’s Harrison Vig and Brenden Hall taking up the next three seeds, it looks like we’re set for another all-Oceania podium. However, because these men didn’t race in the morning, it’s certainly possible that we’ll be surprised by one of the swimmers in the outside lanes. That kind of breakthrough would most likely come from Northern Ireland’s Barry McClements, as he’s the closest to the seed times of the favorites.

Sophie Pascoe leads the field by .90 seconds in the women’s S9 100 free, setting her up well to claim New Zealand’s first gold medal of the the meet. The 2018 silver and bronze medalists, Alice Tai and Ellie Cole qualified safely into the final in third and seventh, so look for them to defend their podium places.

The Australians once again qualified all three of their athletes into the final, highlighting again Australia’s dominance through the first day of the meet. But with Scotland’s Toni Shaw sitting comfortably in second behind Pascoe, the Aussies have their work cut out for them if they want to have another event with multiple swimmers standing on the podium.

The men’s 200 breast is another event where there are two separate races happening. In this case, it’s Zac Stubblety-Cook versus his own world record, then the rest of the field fighting it out for silver and bronze. Stubblety-Cook has been on a roll in this event, following up his Olympic gold with a world record at Australian Trials, then winning at Worlds. Barring disaster, he’s a lock for gold here as well, and could reset his world record.

Scotland’s Ross Murdoch qualified in second with 2:11.35. Though he’ll likely see his Commonwealth Games record go down tonight, he’s put himself in a strong position to defend his silver medal from 2018. He’ll be trying to hold off James Wilby, Matt Wilson, and Maximillian Ang, who all posted times within a second of him. Ang’s Singapore teammate Nick Mahabir got close to Ang’s national record in the 200 breast at U.S Nationals, so we’ll see if Ang can respond from across the Atlantic.

In Budapest, the Australian quartet of Jack Cartwright, Kyle Chalmers, Wilson, and O’Callaghan set a world record of 3:19.38 to win gold. The Australians looked in full control of this race in prelims, even without their world-record setting squad. They swam 3:22.14, almost six seconds clear of England, the next fastest team at 3:28.03. The Aussies have a multitude of options for who they could use on the relay tonight, and are not only the gold-medal favorites, but are a serious threat to reestablish the world record.

England and Canada seem like a lock for the silver and bronze medals, but Wales and Scotland will try and make it close. This will be our first look at Duncan Scott in an international final this season, as he withdrew from Worlds because of post-COVID training struggles. Scott has a loaded schedule for this meet, and this will be our first indication about his form.