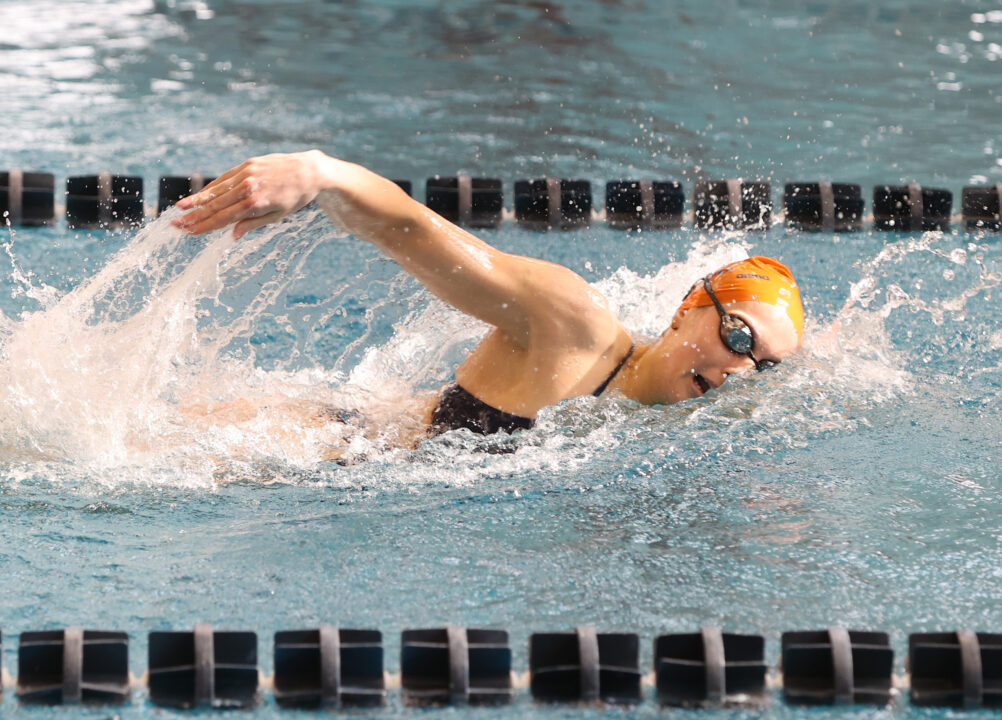 The ACC conference record holder in the 400 IM, Alex Walsh, is skipping that event in favor of the 200 free today at the 2022 ACC Championships. Current photo via Matt Riley – UVA Communications

Heat sheets for day three prelims of the 2022 ACC Championships are out, and the biggest news is that UVA sophomore Alex Walsh will not be swimming the 400 IM, the event in which she holds the conference record at 4:01.40.

Instead, Walsh will swim the 200 free. She was only seeded 12th there on the initial psych sheet, but she anchored UVA’s 800 free relay in 1:41.63 Tuesday night, and replicating the equivalent time on a flat start should make her the favorite to win the event.

Duke’s Sarah Foley and Louisville’s Maria Sumida were two additional top-ten scratches from the 400 IM. Like Walsh, Foley will swim the 200 free; last night, Foley took 2nd behind Walsh in the 200 IM. Sumida has not yet competed this week, and is presumably out of the meet.

Gretchen Walsh, who swam one of the fastest 50 freestyles ever last night, appears to be taking the day off from individual events; she was seeded 6th in both the 100 fly and the 200 free. Watch the Cavalier to swim the 100 back and the 100 free the next two days. Louisville’s Abby Hay also scratched the 100 fly, and she’ll swim the 400 IM, where she’s now seeded 3rd with Alex Walsh‘s scratch.

On the men’s side, the highest-seeded scratch is also the least surprising. UVA’s Matthew Styczen was seeded 3rd in the 400 IM after going 3:44.96 two weekends ago at the Cavalier Invite. However, it appeared at that time that only UVA swimmers who were not going to be at ACCs were swimming a full lineup at that invite. Sure enough, Styczen didn’t compete in the 200 IM yesterday, and does not appear on the heat sheets for today, indicating that he won’t be swimming this week. His 400 IM time is about seven-tenths under last year’s NCAA cut time, but those cuts could be substantially faster this year, so it’ll be interesting to see if he appears at a last chance meet in the couple of weeks to try to improve his chance of a NCAA cut.

The #5 seed in the 400 IM and the 200 free, Carles Coll Marti of Virginia Tech, has opted out of both events, and also looks to be taking advantage of the new schedule to get a rest day. He won the 200 IM last night, and will presumably swim the 100 and 200 breast the next two days.

Like Styczen, NC State’s Conall Monahan, who had the #9 seed in the 400 IM, does not appear to have made the Wolfpack roster for this week, and doesn’t appear on today’s heat sheet.

Meanwhile, Virginia Tech’s Blake Manoff has scratched the 200 free, an event in which he holds the conference record, to focus on the 100 fly. Manoff pulled off the 200 free/100 fly double last year, finishing 5th in the 100 fly and 2nd in the 200 free. Manoff will likely swim the 200 fly and the 100 free as his remaining events.

The #8 seed in the 200 free, Matt Brownstead of UVA, has also scratched that event, and will probably swim the 100 back and the 100 free the next two days.