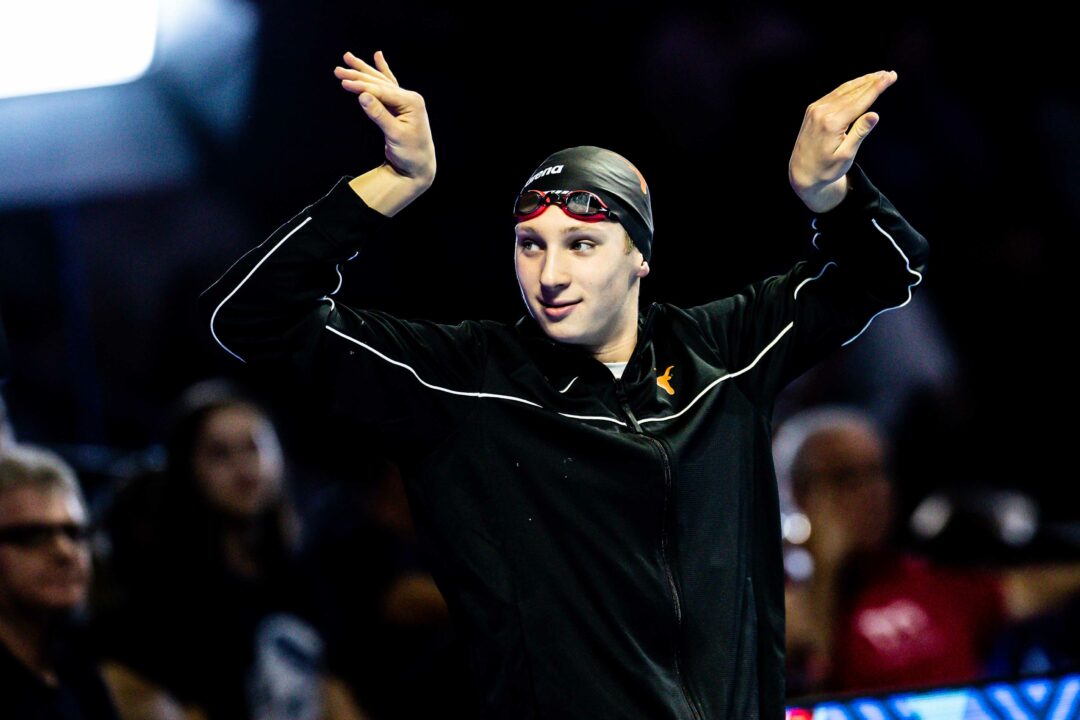 University of Texas' David Johnston is the top seed in the men's 400 IM by 6 seconds. Stock photo via Jack Spitser/Spitser Photography

University of Texas’ David Johnston is the top seed in the men’s 400 IM by 6 seconds. Johnston was the men’s 1500 free champion on day 1, and did so in personal best fashion. He was also a finals qualifier at the Olympic Trials Wave II meet in June, finishing 6th with a 4:16.81. His personal best was swum in prelims at Trials – 4:16.74.

Rancho San Dieguito’s Mia Kragh is the top seed in the women’s 100 fly, coming in with the only sub-1:00 lifetime best. Kragh’s 59.08 best time is from just last weekend, so we’ll see if she can continue that speed into this week. 200 breast champion Isabelle Odgers is also in the women’s 100 fly, and is seeded 9th. Caroline Bricker, a 16-year-old COSA swimmer who swam a huge best time in the 200 breast last night, is seeded 3rd.

Trenton Julian is the top seed seed in the men’s 100 fly by 1.5 seconds, and will be chasing his 3rd title of the meet. After becoming the #9 American all-time in the 200 fly on day 1, Julian won the 200 free and was right on his personal best from Trials last night. He also swam the 200 breast, where he finished 8th in finals after posting a lifetime best in prelims.

Justina Kozan has taken another top seed for finals, swimming a very relaxed 4:47 to secure lane 4 tonight. Kozan was notably only a 1:05.57 on the freestyle leg of the race this morning, which we can expect to be significantly improved tonight. Her best is a 4:40.57, which she swam in prelims at the Olympic Trials to qualify for the final.

Katie McCarthy was just 1.24 seconds off her lifetime best this morning, swimming a very quick 1:03.85 on the final 100 of the race. McCarthy is the only swimmer other than Kozan in the field to have broken 4:50 before.

13-year-old Kayla Han chipped 0.05 seconds off her personal best to qualify 3rd for tonight’s final. Han’s previous best was the time she swam back at the end of May, which shattered the 11-12 girls NAG, which was held by Elizabeth Beisel. With the swim, Han is now ranked #39 all-time in the 13-14 age group. Han was blazing coming home this morning, splitting 1:03.43 on the freestyle leg.

Caroline Bricker, who had a sensational 200 breast yesterday, has qualified for the A final with her 5th-place finish this morning. Bricker was 2 seconds off her personal best, and will probably be a bit faster on breaststroke tonight than she was this morning.

Washington State’s Taylor McCoy swam a personal best of 4:53.56 to get into the A final.

David Johnston secured the top seed for tonight by 5 seconds, swimming a pedestrian 4:23.59. Johnston was 7 seconds off his personal best, and was the 6th-place finisher at the Olympic Trials. Johnston is an excellent distance freestyler, and will likely be home very quickly tonight.

Mason Edmund recorded a huge personal best to qualify 7th for tonight’s final. Edmund swam a 4:30.30, knocking nearly 4 full seconds off his previous best. He was home very fast on freestyle, splitting 1:00.85 on the final 100.

Campbell Stoll was also right on her lifetime best of 1:00.46, which she established in May of this year. Being so close to her personal best this morning, Stoll has also set herself up nicely to potentially swim a lifetime best tonight, and possibly break 1-minute.

Annika Parkhe chipped 0.07 seconds off her personal best to finish 3rd this morning. Parkhe’s previous best of 1:00.80, which she swam just last weekend at the Illinois Senior Championships.

Ava Collinge and Maggie Schalow each chipped approximately 0.1 seconds off their personal bests to qualify for the A final.

Notably, Isabelle Odgers DFS’d (declared false start) this race, and will not be racing individually in finals tonight. Odgers was entered with a 1:00.67.

Cal was all over this event this morning, accounting for 4 of the 8 A finalists, including the top 3. Trenton Julian swam a 52.35 this morning, touching just 0.65 seconds off his lifetime best, which was set at Trials. Julian separated himself from the field this morning thanks to his 2nd 50 split of 27.37. Tonight, it’s more likely that Julian takes the race out faster, as he’s done with each of his finals so far.

Cal’s Jarod Hatch established a new lifetime best this morning to finish 2nd. Hatch took 0.73 seconds off his previous lifetime best, getting out to a faster first 50 than Julian. Dar Rose was just off his personal best of 53.29, posting a 53.56.

Penn State’s Spencer Daly was right in the thick of it this morning, posting a 53.69. Daly was just off his personal best of 53.66.

man, Kayla Han will have just turned 16 by the time Paris rolls around, basically the same age Beisel was Beijing. Excited to see how much time she can drop by then, or even just by Worlds 2022/2023, assuming 2023 is still happening? That seems really interesting actually, 3 years in a row of the highest level international LCM meets.

I’m going to have to watch her tonight. Is she now wearing a tech suit?

Don’t think so I heard she prefers the regular suit.

Mia kragh is on fire lately, wouldn’t be surprised to see her do amazing things at CAL!

I’ve just watched the women’s 400 IM prelims.
Teagan O’Dell’s backstroke is beautiful. Her weakest stroke is breaststroke.
And Justina Kozan’s freestyle technique is great too. Cool to see her back after bad olympic trials. Maybe the pressure had catched up her in Omaha. She’s a great prospect for US swimming in both IM and freestyle. She could help a lot the women’s 4X200 free relay if she keeps improving regularly each year until Paris.

It will be interesting to watch how Kozan progresses over the next year – since she switched clubs from BREA to Mission Viejo.

It looks like she is still matching her times from when she was swimming with BREA, but I suppose we will see if her stroke changes or she develops differently at Mission Viejo.

She definitely has the potential to be a great IM/Freestyle/Butterfly prospect in the coming years!