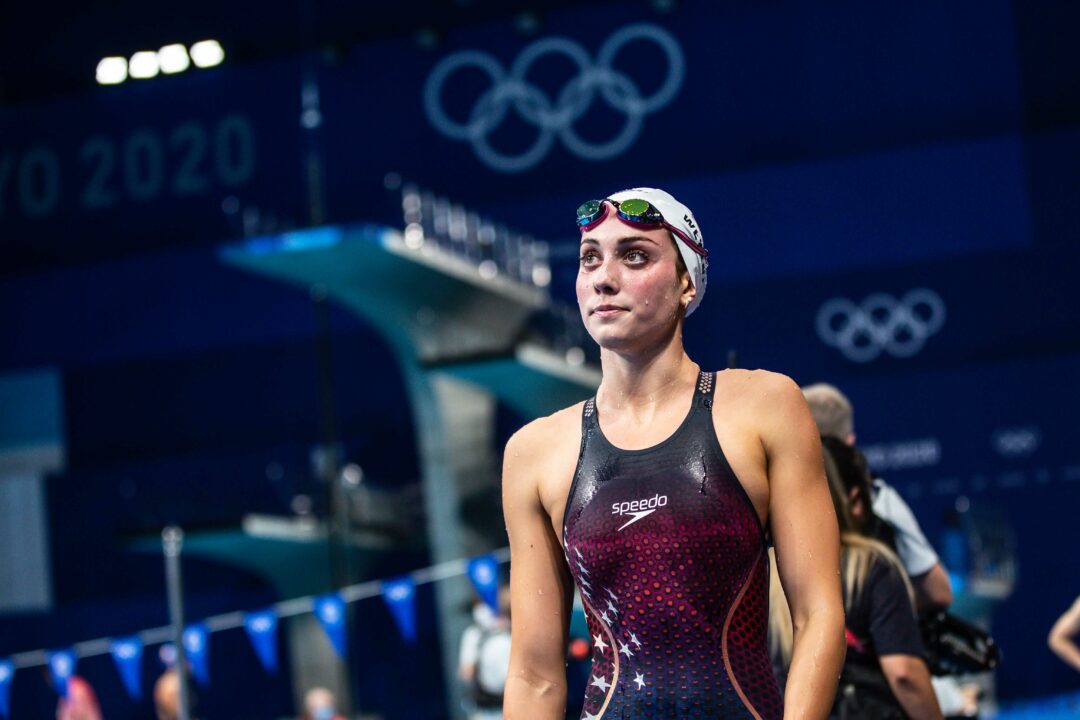 The absence of Abbie Wood gives Emma Weyant a clear inside track for her first career World Championship in the 400 IM this weekend. Archive photo via Jack Spitser/Spitser Photography

UPDATE: Abbie Wood has announced that she is withdrawing from the meet. The below has been updated.

Anastasia Gorbenko, Maria Kameneva and Beryl Gastaldello are the three frontrunners for gold in the women’s 100 IM, having all cracked the 58-second barrier over the past few months.

Gorbenko clocked 57.90 at the Berlin stop of the FINA World Cup circuit, while Kameneva won the event in back-to-back playoff matches in the ISL (going 57.94 in Match 3), and Gastaldello dropped a time of 57.87 in the fourth playoff match for the LA Current.

There’s a number of swimmers in the field that have been 58-something this year as well, including Canadians Sydney Pickrem and Bailey Andison, Italy’s Costanza Cocconcelli, Switzerland’s Maria Ugolkova, Belarusian Anastasiya Shkurdai and Finland’s Fanny Teijonsalo.

Gastaldello should be raring to go after being held out of competing in the ISL Final two weeks ago, but she could potentially have a schedule conflict with the 50 fly, which falls just two events before the 100 IM in all three rounds of competition.

Gorbenko also has a busy schedule on her plate, but this will be Kameneva’s first of just two individual entries, which may give her an edge.

Shkurdai is one swimmer that really came into her own down the stretch of the ISL season in the backstroke events, and does own a scintillating best time of 57.59 in the 100 IM, though it was set last year.

This race will almost surely come down to the last 10 meters of freestyle and who has that extra burst of speed, and with Kameneva’s 50 free ability, she gets the slight edge.

2 of the 4 fastest swimmers of the season, all with best times from the ISL, are all entered in the women’s 200 IM for the Short Course World Championships: Sydney Pickrem (2:04.59), and Anastasia Gorbenko (2:05.04). The two exceptions in that top four are the defending Olympic Champion Yui Ohashi who has also been 2:04 in the short course season.

The two swim a bit differently. Pickrem attacks the breaststroke leg, while Gorbenko swims the most balanced race, finishing the best, of the major contenders who will be at this met.

Pickrem struggled early in the ISL, missing races and leaving empty lanes (which she also did at the Olympics). By season’s end, at the ISL finale, she earned some confidence with a win in the 200 IM, but her time was off – 2:05.79.

Gorbenko, meanwhile, was asked to fill a lot of different roles for the LA Current, and while she handled that variety well in the ISL format, she seemed to get more-and-more tired later in the season, with her IM times rising as high as 2:09.

With a big schedule for this meet too, with 6 individual events for 6 days, and with the 200 IM falling toward the end of the schedule, fatigue becomes a big factor for her.

Canada’s Bailey Andison has been 2:05.38 this season, and Switzerland’s Maria Ugolkova has been 2:06.51, so they’re the next-in-line to grab a spot if she falters.

Margalis swam in yards in November at the Georgia Tech Invitational, but focused mostly on shorter and non-primary events. That included a best time of 53.78 in the 100 yard back, and some other nice times, but nothing that excites much. She has new training in Atlanta, leaving her long-time home at the University of Georgia, and a new part-time job to juggle.

That’s her only meet since June’s Olympic Trials, and it would be a surprise at this point for Margalis to land on the medal stand in this event.

While Alex Walsh, the Olympic silver medalist, isn’t racing at this meet, her teammate and training partner Kate Douglass is. Douglass hasn’t raced short course meters this season, but has been electric in yards, improving on even her own already-fast best times in the breaststroke events.

Virginia trains at race-pace a lot and swims very well in season, so Douglass should have less impact from the context of the ongoing NCAA season than many of the other American collegiate athletes will.

Yu Yiting comes out of the black box that is Chinese swimming, so it’s hard to know exactly where she’s at, but she performed well in September at the Chinese National Games, with a 4:38 in the 400 IM and 2:10.12 in the 200 IM in long course, so it appears she’s fit.

Right now, my instinct is that Pickrem, Douglass, and Yu are the serious medal contenders, with Andison, Gorbenko, and Margalis, in that order, the only swimmers close enough and with enough quality in this event to possibly make the leap on to the podium.

The field for the 400 IM is pretty similar to the one for the 200 IM, with a few exceptions.

For the Americans, Emma Weyant is in and her Virginia teammate Douglass is out; no Gorbenko in this race; Bailey Andison won’t swim the race (in spite of having the #1 time in the world this season); and there are a few other minor players who could make a run at the podium.

That leaves an opportunity for a swimmer like Weyant, the Olympic silver medalist, who was a personal best in yards in 4:03.69 earlier this year, to grab another medal, though she doesn’t have any substantial short course meters racing experience.

The teenage Hungarian Viktoria Mihalyvari-Farkas has been swimming several non-ISL meets in short course meters this fall, though her times have not been great. On November 13, she swam 4:35 at the Hungarian Championships, only half-a-second faster than her long course time at the Olympics.

Cusinato, on the other hand, has raced more sparingly, but has been faster. She was 4:31 in Budapest in October and 4:32 in Riccione earlier this month. She’s always been a little better in short course than long course, and has a PB of 4:27.88 from the last SC World Championships, so if she’s stabilizing in her training after a well-told journey in the leadup to Tokyo, she has medal potential too.

And then there’s Yu Yiting again. She isn’t as good in the 400 IM as she is in the 200 IM, having placed 11th at the Olympics, but in a year like this, ‘on form’ might be enough. Other contenders include Viktoria Gunes of Turkey, who swam a best time earlier this year and is having a big bounceback year in this 400 IM, dropping 5 total seconds from her previous personal best.

I don’t expect Melanie Margalis, who says she doesn’t really like swimming the 400 IM, to have this race locked in, and Ellen Walshe, training at the University of Tennessee but representing Ireland, has better medal chances than this. I think there is a chance that neither actually winds up swimming the event.

So that leaves a clear top-tier of Weyant, even without really being on the international scene yet in short course meters, followed by a wide-open battle for 2nd and 3rd. Pickrem’s 4:23 potential is just too much for me to feel good leaving her off the podium, even if she hasn’t been there this season yet. If we were doing deeper picks, I’d choose the momentum of Gunes and Yiting as next-in-line here, with Cusinato and Jakabos in the next tier.

There’s some darkhorse love to be handed out to Great Britain’s Katie Shanahan. The 17-year old has only been 4:31.83 this season, but that’s already a 10-second drop from her previous best time.

If only KD could swim the 100 IM. I hope they also put her on some relays.

Yes, surprised she is not in the 100 IM also – with her NCAA sprint speed, how was it decided to not include her in this event?

I have a feeling Ms. Douglass is going to light it up and I wouldn’t be surprised if she found herself on at least one of the relays at the meet.

Why isn’t Andison swimming the 400 IM?

Canada, like the US, selected team based on lcm times.

where can we watch sc worlds?

Since there are no Aussies at WC I guess I’ll keep cheering for the Roar. Would love to see Sydney top the 200 and Shanahan sneak into the medals for an event.

I think he means there’s no Aussies in the Women’s IMs, hence why he only mentioned Roar’s Female IMers.

I personally think Margalis will be up there in the 200/400.