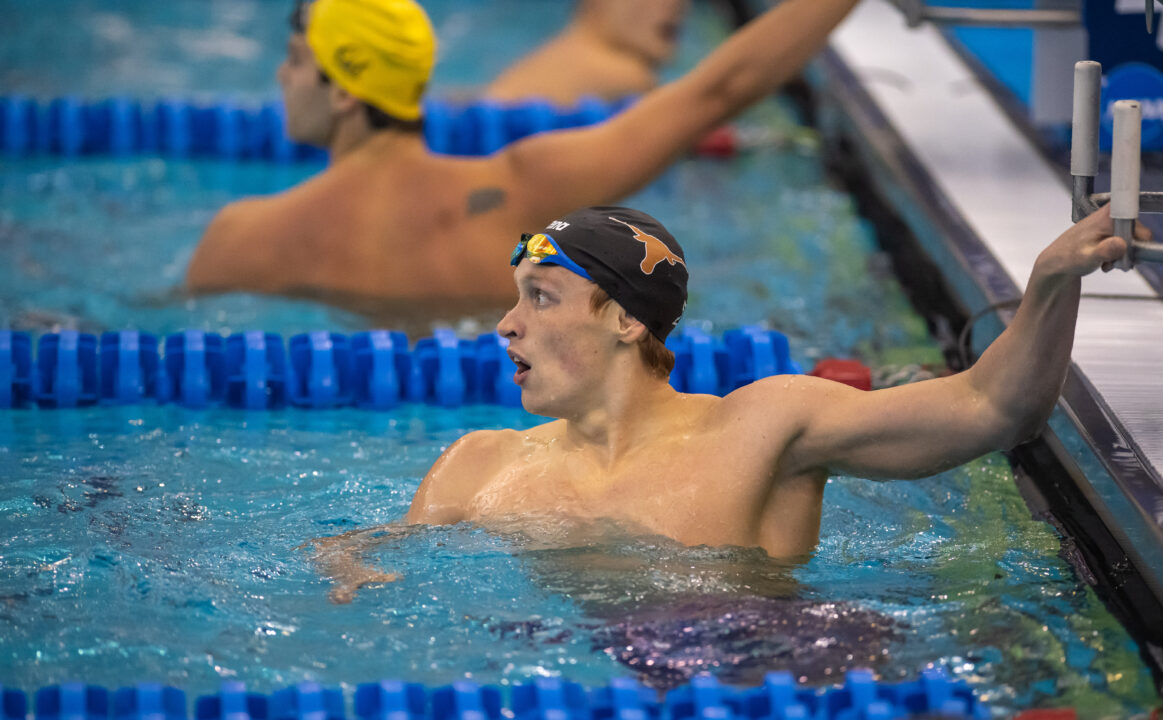 The Cal Bears returned 8 up and 2 down swims Saturday morning, yet the Texas Longhorns look strong to hold onto their lead from yesterday. Current photo via Luke Jamroz Photography ©

On Saturday morning, the Greensboro Aquatic Center had its last preliminaries session with the 200 back, 100 free, 200 breast, and 200 fly. At the conclusion of the session, the Cal Bears picked up 8 up and 2 down swims while the Texas Longhorns picked up 6 up and 4 down swims. Georgia had the next-best showing with 3 up and 3 down swims, followed by Virginia Tech and Florida picking up 2 A-finalists each. Cal is expected to reel in 135.5 points after their prelims showing while Texas is projected bring in 115 total points from the four events. However, Texas will still have a 22.50-point lead over Cal minus the 1650 free, platform diving, and the 400 free relay.

In the 200 back, freshman Destin Lasco broke the pool record at 1:37.19, leading a trio of Bears including #4 Bryce Mefford and #5 Daniel Carr. The Texas Longhorns will have #3 Carson Foster and #6 Austin Katz in the championship final along with #2 Shaine Casas of Texas A&M and #8 Clark Beach of Florida, who beat Virginia’s Justin Grender in a swim-off after tying at 1:40.20.

Ryan Hoffer of Cal will aim for his 3rd title here in Greensboro with his top 100 free seed alongside #4 Bjorn Seeliger. Texas will also have #2 Drew Kibler and #3 Daniel Krueger while Florida will have #6 Kieran Smith and Alabama’s Matt King snagged the 8th seed after getting DQ’ed in the 50 free.

Cal’s Reece Whitley picked up the top seed in the 200 breast over last night’s 100 breast champion Max McHugh of Minnesota. Texas’ Caspar Corbeau earned the third seed behind Stanford’s Daniel Roy while Whitley will be joined by Cal teammate Hugo Gonzalez in the championship final. Longhorn teammates Braden Vines and Jake Foster snagged the 9th and 10th seeds in the consolation final.

Not including: platform diving, 400 free relay

The 1650 free timed finals are set to begin before the start of this evening’s finals session. Florida’s Bobby Finke comes in as the top seed and the American/U.S. Open/NCAA record holder. However, Georgia is expected to pick up 26 points in the event, six more than Florida if Finke wins.

Does anyone else think it’s crazy that 2 teams are going to score over 500 points? What a concentration of talent at the top.

That’s what happens when 2 schools recruit the top talent year after year.

Not disagreeing with you, but scholarship limits have been the same for a while now. What’s changed?
Is this kind of top-heaviness good or bad for the sport at the college level? Or of no consequence?

IMO I think it would be great for the sport if 3-5 teams had a legitimate shot every year. It would generate much more interest. The battle coming down to the last relay. Every swim counts Every swimmer plays a part. Getting 12th instead of 15th is just as important as 4th vs 7th. Good luck Bears!!

I feel like Georgia and Florida are really on the rise. Cal will lose a lot of good seniors, so I think next year will be more competitive.

UGA Florida NC State and IU are cyclical as recruits come and go. Recruiting the top class year after year keeps you at the top

Some of the most outstanding swims have come from other schools like Louisville along with the Virginia men. There are lots of places to go and get faster. It’s all a choice and there are lots of great programs.

Hopefully the next olympic cycle will change it up, not rooting against anyone but nc state got really good after 2016 for a couple years

Coaching is important without a doubt but recruiting is the key to winning the big one. Look at all the marquee teams who are way down this year. Same coach Same pool Same school The difference? The talent is simply not there.

Most NCAAs are a battle between two schools, particularly after the conference championships. Rarely is it a 3 or 4-team affair. Looking back at the history books and you’ll see a lot of Texas vs. Stanford, Texas vs. Auburn, Texas vs. Cal, and a handful of other combinations which include the likes of Michigan.

Having swum at UT in the 80s, I can say that it’s not necessarily about getting the #1 recruits year-in and year-out. Texas in particular has regularly attracted athletes that would be the top swimmers in second and third-tier programs. They come in, work the program, and contend for a national championship. This edict is largely unspoken, but it plays a factor in recruiting. The… Read more »

I will never tire of the lies that Texas exes tell themselves about their program.

It is necessarily about getting the #1 recruits year in and year out. Sure you have to coach them up and develop them. But, quit pretending that Texas is winning NCAA titles on the backs of second and… Read more »

You’ve made some great points and also helped make my point. Braden Vines is a great example…without athletes like Braden scoring, they likely wouldn’t win. Championships are won on depth, plain and simple. You cannot win a championship with four or five or #1 or #2 recruits and nothing else. I’m not disputing that Texas has had their share of top-ten recruits, but it is not a team built solely on that aspect.

Furthermore, this template has been run for 40+ years. If you look at the 80s and 90s teams, they had there share of top athletes, but half or more of the scoring (unscientifically calculated) came from those that weren’t the “top guns.”

If you don’t think it’s about recruiting look at the Stanford women this year. All the superstars moved on and where did they finish – 11th. Again same coach same pool same school same culture.

Hopefully we will hear from the Texas boys in interviews

Thanks for the great insights and news coverage.