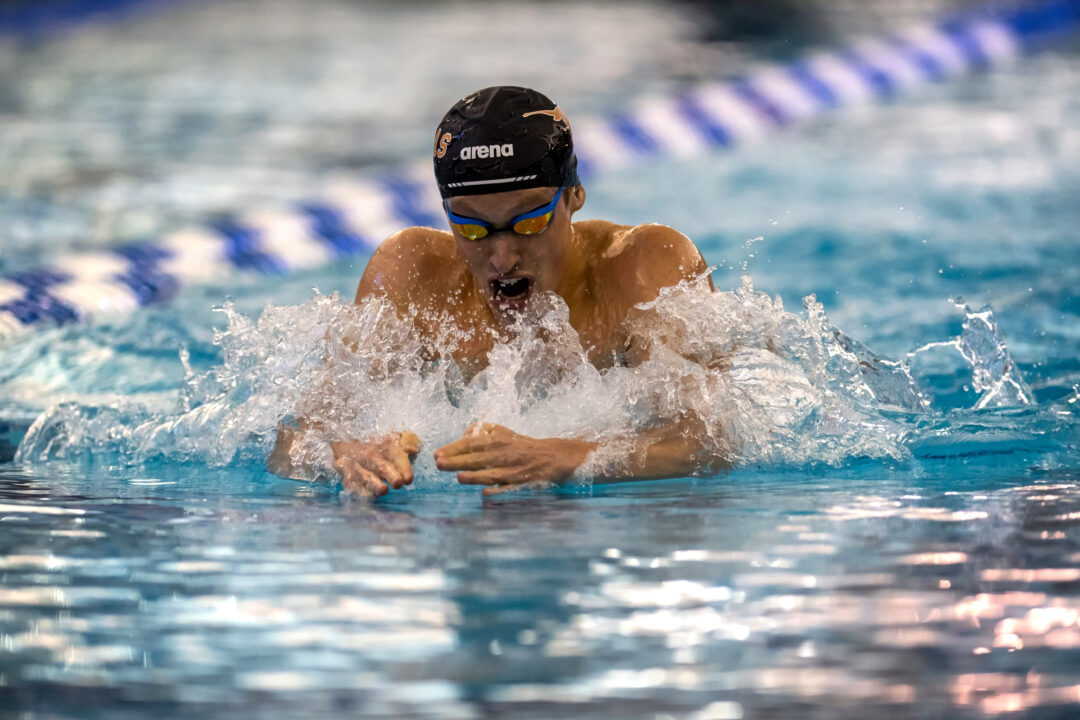 The Longhorns' key to success so far this meet has been getting all 16 swimmers to score, something they have not accomplished in recent years. Current photo via Luke Jamroz Photography ©

When we started projecting out how this year’s Cal v. Texas battle would play out (which some of us may have started doing about a year ago), one thing that seemed likely is that this meet really could come down to the Longhorns’ ability to get scoring swims from the bottom half of their roster. Cal clearly had the stronger top half of the roster, with 8-10 guys who seemed likely to score in multiple A-finals, and on paper, Texas seemed to really need the bottom half of the roster, the guys who made not necessarily be seeded to score, to step it up and earn some points.

And so far, that’s exactly what’s happened. As of tonight, every Longhorn swimmer has made at least one final and scored points. Despite Texas’ legendary depth, this isn’t something that has happened in recent history. It didn’t happen any year during their legendary four-peat from 2015-2018, and it didn’t happen when Texas needed it most, two years ago when they lost to Cal by 85 points. Granted, Texas qualified so many men this year that they had to leave guys who were seeded to score at home, so this isn’t exactly shocking, but it still wasn’t guaranteed to happen, given that Texas didn’t really swum lights-out at NCAAs in 2018 or 2019.

After tonights’s 200 medley relay, the Longhorns lead the Bears by 42 points. With Louisville and Florida going 1-2, this marks the first time this meet where Cal or Texas didn’t take the win, and the first time where neither school finished in the top two. Florida freshman Adam Chaney had the fastest backstroke split of the night with a 20.55. Ohio State’s Hudson McDaniel split 22.70 on breast, which appears to be the 5th-fastest split ever, and he was closely followed by Michigan’s Will Chan at 22.71. The fastest fly split came from Pitt’s Blaise Vera, who blistered a 19.52, the 3rd-fastest split ever, although the Panthers still ended up outside of scoring at 20th. Cal’s Bjorn Seeliger continued his strong week with a 18.37 anchor leg, the fastest free split of the night.

Unless meet is in Austin, then they lose

You’re not wrong but it wouldn’t affect the team title. As it stands Cal and Texas will both approach 500 points. I could be wrong, but I don’t think there has ever been a losing team with 500+ points.

Perhaps with greater parity, it wouldn’t be so pronounced, but they would still be the top two teams.

Interesting to note that Florida has finished 2nd, 2nd, 3rd, and 4th in relays, and they have zero seniors on any of them. They only have one senior at the meet (Clark Beach, who has a good shot at scoring in the 200 back).

Is there somewhere the public can see the relay exchange reaction times? Cal seemed very conservative on the first two exchanges in the 200 medley relay.

Sink or Swim – check out the live results link in the bullet points at the top.

Yes. The live results in the yellow page have them. There was one Ohio State exchange I thought was sus, but the machine says it was +0.02, and who am I to dispute.

I’ll answer my own question – I didn’t realize the reaction times are there with the results. I guess Cal wasn’t that conservative. 0.56 total seconds exchange seems pretty average.

I love that they had a total reaction time of 0.08! Awesome

The 200 back and then also Bjorns 100 free and Hugo’s 200 breast could be game changers. Both are seeded outside of scoring but could both be top 8 or better

And there are people that want Texas to stop giving scholarships to divers and RECRUIT MORE SWIMMERS.

It’s entirely foolish not to recruit divers. You’d almost have to be trying not to win.

Right? Can you imagine a team saying ‘eh, we aren’t going to worry about recruiting breaststroke swimmers’

How about building 10 meter platforms to go with 1 and 3 meter boards and not scoring reasonably well at conference and national levels? Getting by in dual meets used to be OK, but when you get the same points for half the head count, you have to change the mindset. Look at what North Carolina and Miami have with diving points!

And UNC doesn’t have a 10 meter and they and NC State both have to make the hour / 90 min drive to Greensboro weekly for 10M practice.

Cal salt towards diving is laughable. Not like Eddie has used the same team formula the last… 50 years…

And as I wrote on another thread.. it’s not like Cal didn’t build a new 50 meter pool complete with a diving tower a couple years ago…