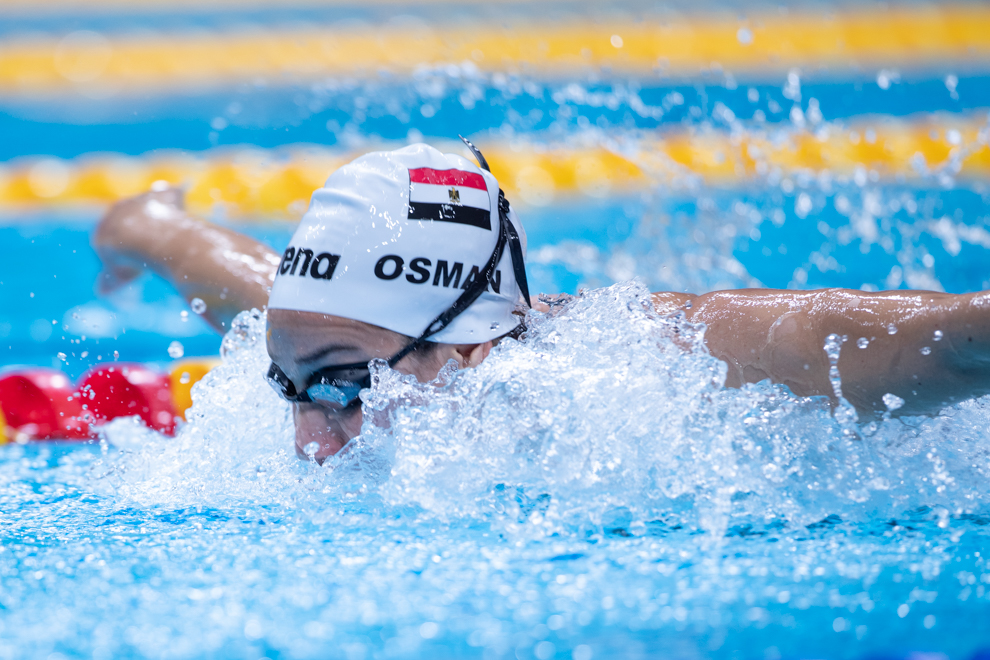 Egypt's Farida Osman won the 100 meter fly at the ISCA Championships with a time of 57.84, .01 off her lifetime best which placed 12th at the 2016 Olympics. Archive photo via Rafael Domeyko

Notably, both Ryan Lochte and  Caeleb Dressel scratched the 400 IM after placing 1-2, respectively in prelims. Sherridon Dressel, 2nd seed in the 100 fly, scratched that race to focus on the 200 free.

The 100 fly was the highlight of the meet on both the men and women’s side. Two-time NCAA 100 fly champion Farida Osman dominated the women’s race, touching the wall 1st at 57.84 with a 2.5 second lead over the rest of the field. She finished within .01 of her lifetime best from the 2016 Olympics where she placed 12th overall – which is the Egyptian Record in the event.

Flora Molnar snagged 2nd with a time of 1:00.44, just over a second off her lifetime best from 2017. 16-year-old Athena Meneses Kovacs of Eagle Aquatics placed 1st in the 16&Under category with a best time of 1:00.38, dropping .17 and becoming the #59th all-time fastest in the event in her age group. 14-year-old Erika Pelaez of Eagle Aquatics claimed 4th with a time of 1:01.39, shaving one-third of a second off her lifetime best from February and ranking herself #50 all-time in her age group. Pelaez, who has already made the Olympic Trial Wave II cut in the 100 free, is one of the youngest Wave II qualifiers.

On the men’s side, World Record holder Caeleb Dressel battled 2016 Olympic champion Joseph Schooling and Olympian Jack Conger in the 100 fly, with Dressel ultimately claiming victory by a wide margin of 1.24 seconds. Dressel finished the race with a time of 51.69. According to the USA swimming database, this was his first 100 LCM fly of the season, but he was pretty close to where he was at this point last season when he posted a 50.92 at the Des Moines Pro Swim Series. He was still off his lifetime best, 49.50, which won gold at the 2019 World Championships.

Schooling finished in 2nd (52.93) with Conger in 3rd (53.05). They were off their lifetime bests by about 2.5 seconds and 2 seconds, respectively, Arsenio Bustos of Woodbridge Aquatic Club snagged 3rd with a time of 53.20, about half-a-second off his lifetime best from the November 2020 U.S. Open.

Two swimmers clocked new Olympic Trial times in the event: 6th place finisher Jace Crawford (53.91) whose previous best was 55.56 from Summer Junior Nationals and Mitchell Ledford who finished 2nd in the 16&Under category with a time of 53.79. His previous best was 54.79 from February.

Though Caeleb Dressel was the top seed in the 200 free after this morning’s short course event, it was Eagle Aquatics’ Alex Sobers who won the event in finals with a time of 1:48.35, breaking his own Barbados National Record by about 2.4 seconds. He set that record at the 2019 Pan American Games where he won the ‘B’ final.

In the 400IM, Ilektra Lebl touched the wall 1st with a time of 4:51.66 followed by Bellingham Bay Swim Team’s Rylie Lopez (4:56.61) with Lopez adding about 1.5 seconds to her best time. The USA Swimming database does not list a best time for Lebl. In the 16&Under category, 14-year-old Payton Foster of Greenwich YWCA  #82 won with a new lifetime best of 4:54.16, dropping half-a-second from the time she swam in January, and out touching Fox Valley’s Leah Hayes by .09. This time ranks Foster #82 out of the all-time fastest 13-14 year-olds in the event. Hayes’ best time still stands at 4: 46.48 which she posted at the 2019 Summer Junior Nationals.

There were huge time drops for the teens in this event. 16-year-old Andrew Taylor of Tampa Bay Aquatic Club matched Bitz, winning the 16&Under category with a time of 4:29.03 in a close race with Ryan Merani of North Baltimore Aquatic Club (4:29.06).  This was a great swim for Merani who demolished his previous best from January 2020 by over 13 seconds. Taylor also crushed his best time, dropping just over 3 seconds. 14-year-old Elliot Lee from Bulldog Swimming placed 4th with a time of 4:44.78 rank, dropping 7 seconds from his best time from the 2019 Zone Age Group Championships.

He out touched Gator Swim Club’s Khader Baqlah by one-third of a second while Caeleb Dressel finished 3rd (1:49.26). Lochte snagged 5th with a time of 1:51.87. Baqlah added about 2 seconds as did Dressel, while Lochte was about 7.5 seconds off his best which won gold at the 2011 World Championships.

In the 50 backstroke, Madelyn Moore took 1st place with a time of 29.48. 15-year-old Gabrielle Van Brunt of Georgia Coastal Aquatic Team won the 16&Under event, also breaking 30 seconds with a time of 29.80. Overall, Brunt would have tied for 3rd place with Yulduz Kuchkarova.

Sierra Marlins Swim Team’s Kaikea Crews won the men’s 50 back with a time of 26.07, half-a-second ahead of the field. St. Thomas Swimming Association 16-year-old Max Wilson’s time of 26.63 won the 16&Under event and would have placed him 3rd overall.