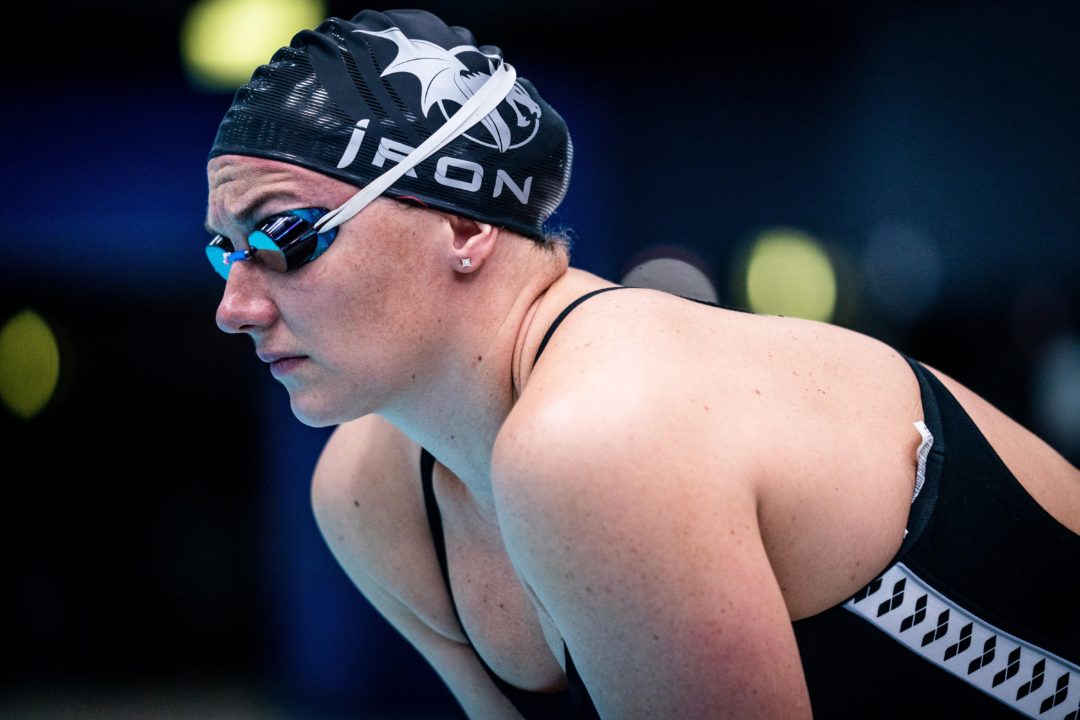 Despite placing third in their first match of the season last season, team captain Katinka Hosszu once again remains off the start lists for Iron. Archive photo via Mine Kasapoglu

For match five, team captain Katinka Hosszu once again remains off the start lists for Iron. Last week, Hosszu was present in Naples but did not compete. During match three, Africa Zamorano and Ingeborg Loyning placed 5-7 in the 200 back while Maria Ugolkova placed 3rd in the 200 IM to Zamorano’s 6th-place finish, two events Hosszu could have been entered in today.

Iron was cleared for competition today following a confirmed negative COVID-19 re-test after a staff member received a positive test result on Tuesday.

Peering at the regular season club standings with four matches completed, Iron sits in a four-way tie for 7th with two points  alongside the DC Trident. However, this will only be Iron’s second match of the regular season thus far. During match three, Iron placed third over the NY Breakers, who repeated a fourth-place finish in their second match. The DC Trident also placed fourth for their two matches. A fourth place finish in a regular season match is worth one point towards season standings.

More notable entries in the women’s 200 back include Toronto power duo Kylie Masse and Lisa Bratton, as well as newly-minted Canadian 100 back record-holder Ingrid Wilm of LA. Wilm will also take on the 50 back against match four 1-2 finishers Linnea Mack and Ali DeLoof of the DC Trident. DeLoof is slated for the 200 back while Mack will also swim the 100 fly against the likes of Toronto’s Louise Hansson and New Zealand record-holder Helena Gasson of LA.

Accompanying Gasson in the 100 fly will be teammate Anna Ntountounaki over known flyer Beryl Gastaldello, who is only entered to lead off the 4×100 free relay and the 50 back. During match four, Gastaldello only swam on relays for day one competition.

Another known flyer taking on an interesting day one schedule will be Tom Shields of the LA Current. Along with the 100 fly, which he is favored to win, Shields will take on the 50 free with teammate Vladislav Bukhov. During the 4×100 free relay in match four, Shields put up the second-fastest LA split at 46.68, taking his leg out in 21.93.

Making his ISL season 3 debut for the DC Trident will be Cody Miller, who will take on the 200 breast next to match one winner Tommy Cope and the 50 breast next to Felipe Franca Silva.

Taking another shot an individual swims this match for the Trident will be rookie Ryan Hoffer. During match one, Hoffer placed 5th in the individual 50 free, yet only swam on relays for match four. This match, Hoffer will once again take on the 50 free, but only swim the 4×100 free relay instead of also contributing in the medley relays.

can anybody explain to me why Kristof Milak isn’t swimming in the ISL? is team iron saving him for the bottom 4 match or playoffs? he would seriously dominate this league easily if he came back……

After Tokyo Kristof wishes to a well dererved holiday without swimming and racing as some other swimmer. As far as I know e. g. Boglarka Kapás not swimming for 2 months.
Maybe Katinka also wanted some rest After Tokyo.
But I agree with you Milak would be a huge benefit for Iron. Although he is better in SCM than LCM.
Hope more swimmer come back soon. Maybe timing of the ISL was a little unfortunate right after the olimpics

Anyone got the link for it please ?