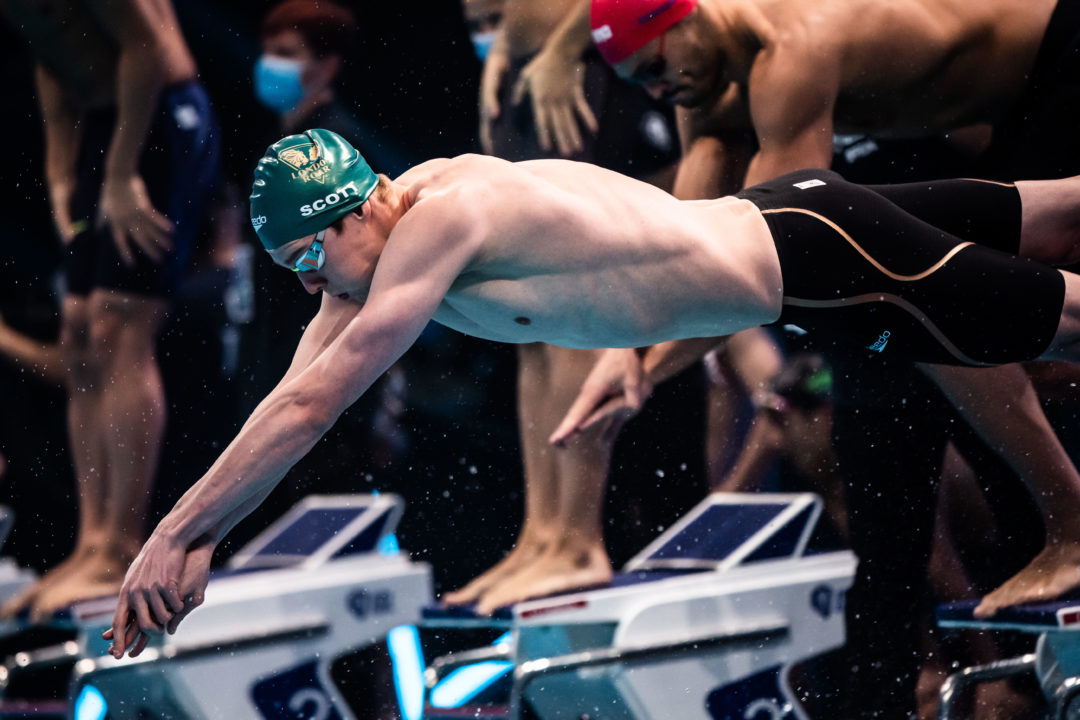 The third match of the 2021 ISL season will feature Iron and London Roar in their season 3 debuts, alongside Energy Standard and the New York Breakers. Current photo via Mike Lewis/Ola Vista Photography

The third match of the 2021 ISL season will feature Iron and London Roar in their season 3 debuts. Iron was much stronger in season 2 of the ISL than they were in the league’s inaugural season in 2019, though they’re still arguably lacking compared to Energy Standard and London Roar, both of whom boast incredibly strong rosters.

London, however, is missing some of its key players from season 2. Most notably, the Roar is without Adam Peaty, Tom Dean, Kyle Chalmers, and, probably for this match, Emma McKeon. These losses hurt, but with Aussie Minna Atherton making their returns to the league, the Roar gets a little boost.

The 2012 Olympic gold medalist in the 200 fly, Chad le Clos of Energy Standard, will face off against the 2020 Olympic gold medalist in the same event, Kristof Milak of Iron. Milak was a solid performer in the first season of the ISL, though he’s been a much better long course swimmer in the past. However, given his huge improvement in the 100 butterfly (in long course) and his improved speed, there’s reason to believe his short course game will also improve. Milak, like le Clos, is a great freestyler, though Milak is more of a middle distance swimmer who can sprint versus le Clos who is a sprinter that can also swim the 200 free at an elite international level.

Le Clos is probably the most dominant 50 butterflyer racing this weekend, and his teammate Ben Proud could also be utilized in the 50 fly as well as butterfly skins, if we get to see that again, (and is the 2017 LCM world champ in the race). Kregor Zirk will also play a supporting role in Energy Standard’s fly crew, though he didn’t swim too hot in match 1. Though Milak might not race a 50 fly, his teammate Nicholas Santos surely will, and could threaten le Clos for the win. Vini Lanza will be London’s top butterflyer, though he could also be utilized in the 200 IM or on a freestyle relay. London will likely utilize Kenzo Simons or Teppei Morimoto in addition to Lanza in the fly races. Matthew Temple and Jakub Majerski could bring in some much-needed points for New York in the 100 and 200 flys, and Temple will also likely swim an individual 100 or 200 freestyle this weekend.

Emma McKeon is on the London Roar roster, but she will not arrive in Naples until next week, meaning the Roar’s butterfly will have to be carried by Marie Wattel, Kim Busch, and Ilaria Bianchi–Roar is in good hands. Anastasia Shkurdai and Maddie Banic return for Energy, while Iron brings in Ranomi Kromowidjojo, Melanie Henique, and Alys Thomas. Svetlana Chimrova won the 200 fly in match 2 and placed 3rd in the 100 fly, and has as good a chance as anyone to win the 200 fly in match 3.

Men’s backstroke will be fun to watch this weekend. Energy Standard’s Kliment Kolesnikov and Evgeny Rylov will return and ought to be the odds-on favorites for winning the 100 and 200 backstrokes–and very possibly the 50 as well. Kolesnikov will have his first opportunity to take his World Record back in the 100, though that would be extremely surprising.. Robert Glinta will make his season 3 debut for Iron and will be their best bet at pulling a backstroke upset. Guilherme Guido, Christian Diener, and Luke Greenbank will bring the hurt for London on the men’s side. New York is definitely the weakest of the four teams in men’s backstroke and probably won’t make much noise here.

Conversely, New York does bring in strong female backstrokers in Alicja Tchorz, Daryna Zevina, and Paulina Peda. However, they will be up against Aussie Minna Atherton who returns for London Roar. Atherton is complimented by Kira Toussaint, who broke the World Record in the 50 backstroke during ISL season 2. Energy’s Georgia Davies and Simona Kubova are solid additions to the 50 and 100 backstrokes, and Mary-Sophie Harvey could be utilized once again in the 200. Katinka Hosszu, Ingeborg Loyning, and Melanie Henique will likely represent Iron in women’s backstroke, though they are probably the weakest team in this discipline.

Evgenia Chikunova and Benedetta Pilato can cover all three distances of breaststroke between them, though it’s hard to bet on a winner. London Roar will bring Annie Lazor, who out-touched Chikunova for the bronze medal at the Tokyo Olympics by 0.04, and short course star Alia Atkinson as nice complements in a sprint-distance combo.

Lazor can swim a world-class 100 breaststroke though, and she’ll be helped by teammates Jenna Laukkanen and Sydney Pickrem.  Abbie Wood, Molly Renshaw, and Sarah Vasey make up a respectable female breaststroke crew for the New York Breakers, though all would have to pull off a major out-of-nowhere upset in order to win any of the three breaststroke races. Iron is not quite as stacked as the other teams in women’s breaststroke, but Ida Hulkko and Jenna Strauch are waiting in the wings for them. It’s easy to imagine a woman from Energy Standard winning both the 100 and 200 breaststrokes, but their second swimmer could be pushed down the final rankings by both London Roar swimmers, and in the hunt for points that can be detrimental.

Ilya Shymanovich and Felipe Lima are a solid sprint breaststroke duo for Energy Standard, though Emri Sakci was a dominant force in the ISL in season 2 and might once again be Iron’s MVP, especially if breaststroke is chosen for the skins. David Verraszto will be a force for Iron in the 200 and could challenge New York’s Marco Koch for the win. The men’s 200 breast is a relative weak point for Energy Standard, who will rely on Charlie Swanson and probably Maxim Stupin in the longest breaststroke event.

London Roar takes a big hit without Adam Peaty in the breaststroke. While Peaty is better in long course he is still dominant in short course, and is a major points-earner for London. In Peaty’s absence, the Roar will rely on Ross Murdoch and Samuel Williamson, both a far cry from Peaty.

Even without freesytlers Tom Dean and Kyle Chalmers, Duncan Scott is a huge asset to London in sprint and middle-distance freestyle, and could both prove extremely valuable in a freestyle skins race. Vini Lanza, Kenzo Simons, and Katsumi Nakamura could also play supporting roles for London in freestyle, and be valuable on relays. Energy Standard is stacked on paper, but their male freestylers didn’t really show up in Match 1, save for a win in the 50 free by Ben Proud and a 2nd-place finish in the 4 x 100 free relay. Proud could repeat again as the victor in the 50, but without switching Kolesnikov or le Clos over to the 100, Energy Standard is unlikely to win any other men’s freestyle events. Iron’s male freestyle crew is okay but not great. Arguably, their best freestyler is butterfly specialist Milak. Despite poor individual finishes in the individual 50 and 100s freestyle in match 2, the New York Breakers pulled off a 2nd-place finish in the men’s 4 x 100 free relay in match 2.

Unless Iron’s Katinka Hosszu is back on form, London’s Sydney Pickrem and Energy Standard’s Mary-Sophie Harvey are probably the best IM’ers on the women’s side in Match 3. Abbie Wood looked great in Match 2 though, and she could get the Breakers some valuable points in both the 200 and 400 IMs.

Joe Litchfield was good for the Breakers in Match 2 and could challenge London’s Duncan Scott in the 200 IM. Brendon Smith is a great IM asset to the Breakers as well, and could win the 400 IM, depending on Scott’s event schedule. Charlie Swanson and Maxim Stupin are Energy’s best IM’ers, other than Kolesnikov who already has his hands full with backstroke, freestyle, and relays. Vini Lanza will likely also swim IM for the Roar, and though he struggled in ISL competition in 2020 relative to the year prior, his 2019 season for London showed what he’s capable of (46th in MVP scoring).

Iron’s success in the IMs will hinge greatly on how David Verraszto is swimming.

The relays will make for a very interesting showdown between Energy Standard and London Roar. The Energy Standard men are likely to run away with the medley relay, especially with the return of Ilya Shymanovich, though the mixed medley relay could come down to the wire thanks to London’s ultra-strong women’s roster. If London has Emma McKeon, their women’s medley relay will be tough to beat. Without McKeon they’ll have to rely on Marie Wattel and/or Ilaria Bianchi or Kim Busch for butterfly. London will probably have the second-strongest men’s medley relay, and could assemble a formidable men’s free relay, though neither is likely to topple Energy Standard’s ‘A’ team.

Iron could throw together the second-strongest women’s freestyle relay with Kromowidjojo, Henique, Seemanova, and Andrusenko. Iron’s men will be strong in both the medley and free relays, and though it’s a long-shot for them to come close to Energy in either, they could challenge or even topple London in either race. New York is unlikely to bring home many points in any of the relays, though their men’s medley relays fared decent in match 2.

Energy Standard will have a battle on its hands with London Roar, and in some disciplines, with Iron, but they are still the likely victors of Match 3. London is especially strong in women’s breaststroke and backstroke, and could pull off a relay win or two. Iron’s team is strong, though its success hinges largely on the shoulders of a handful of stars. The New York Breakers, meanwhile, have their standouts and are particularly good in both women’s and men’s IMs, but across the board they don’t stack up to the other teams.

OK but why are the New York Breakers? Yep, that’s the whole question.

Is Freya Anderson out there? I thought she was swiiming for roar but couldn’t see her on start lists?

That’s a big blow for London with McKeon also missing.

Without Manaudou, ES could be in a very tough spot if the men’s skins is freestyle

Atkinson’s definitely there having fun in her new London kits. McKeon and Chalmers not yet.

Saying Le clos is the most dominant 50 flyer with Nicholas there???