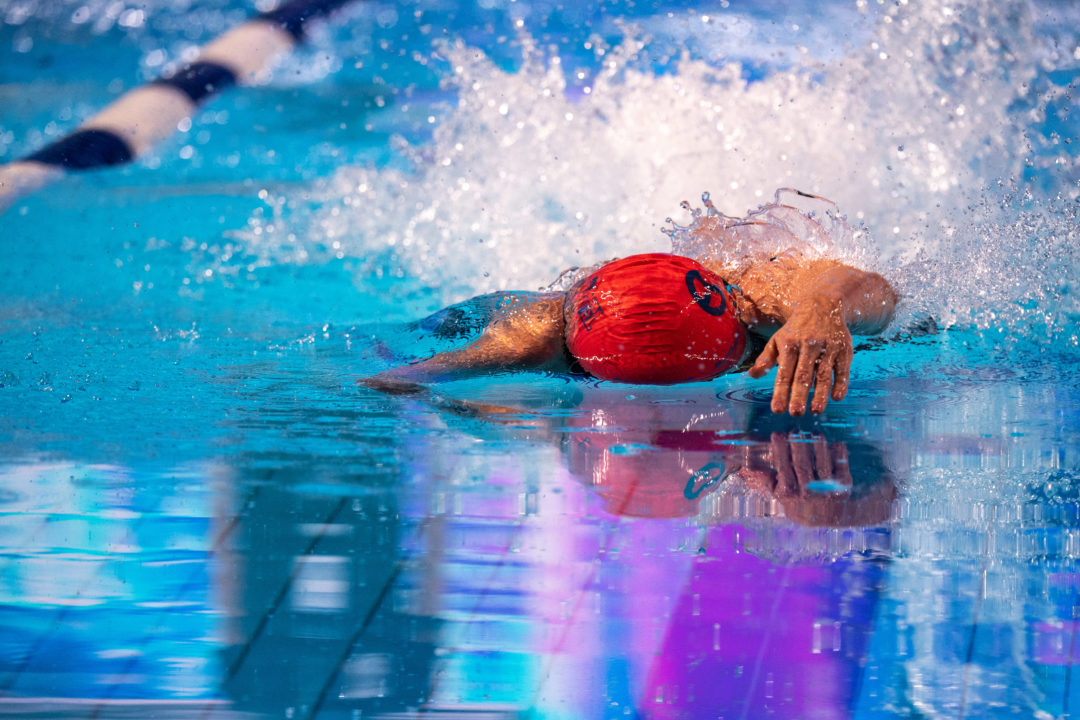 Energy's Sarah Sjostrom will swim the 50 free in her first ISL season 3 match. 55-capable Maddy Banic will swim the 100 fly in her place. Archive photo via Mike Lewis/Ola Vista Photography

The day one start lists for the inaugural match for ISL season 3 are now out.

Swede sprinter Sarah Sjostrom is not entered in the 100 fly following a rehabilitated elbow injury. At the Tokyo Olympics, Sjostrom failed to medal in the 100 fly final, but was able to secure a silver medal in the 50 free. While Sjostrom remains as Energy Standard’s fastest 100 flyer, they have enough swimmers to make up for her event absence. In for the women’s 100 fly will be Anastasiya Shkurdai and Maddy Banic, who has been as fast as 54.85 on the medley relay.

Sjostrom is entered in the “A” 4×100 free relay this session, along with both Shkurdai, Banic, and multi-time Hong Kong national/Asian record-breaker Siobhan Haughey. Sjostrom will also swim the 50 free alongside Haughey. Sjostrom will also swim the anchor leg of the women’s 4×100 medley relay following Mary-Sophie Harvey, Benedetta Pilato, and Banic.

Former ENS swimmer Kayla Sanchez of Canada will be on Toronto’s “A” women’s 4×100 relay along with Anika Apostalon and Swede sprinters Michelle Coleman and Louise Hansson. Hansson is expected to swim the 100 fly while Coleman is entered in the 50 free alongside Cali Condors’ trade Kasia Wasick.  On the “A” medley relay, however, Hansson will swim fly while Sanchez will anchor. Wasick is entered as the freestyle anchor on the “B” relay.

Another Energy swimmer who is not in a regular event is Florent Manaudou, who will be swapped with Clement Mignon in the 50 free. Energy will still use Ben Proud in the 50 free. Manaudou also appears to not be entered as a relay swimmer either. Energy’s top relay will have Chad le Clos, Kliment Kolesnikov, Mignon, and Proud. In the medley relays, Mignon and Andrey Zhilkin will swim the free legs.

Sprint free/fly threat Ryan Hoffer of the DC Trident in entered in the 50 free with teammate Zach Apple. Hoffer will also swim fly on the “A” men’s 4×100 medley relay. In the individual event, however, Camden Murphy and 200 flyer Zach Harting will be entered over Hoffer.

Aqua’s Szebasztian Szabo is expected to swim both the 100 fly and 50 free, where he will accompany 50/100 free specialist teammate Alessandro Miressi. As expected, Energy’s Chad le Clos and Toronto’s Marius Kusch are entered in the men’s 100 fly.

Toronto has a strong women’s backstroke force, with Kylie Masse and Lisa Bratton entered as big contenders in the 200 back. Notably, Kathleen Dawson will not swim this event for Aqua Centurions. Instead, freestyler Federica Pellegrini will be in for AQC. Mary-Sophie Harvey will be in for Energy Standard while Ali DeLoof will rep DC. Harvey will also translate her capabilities in the 200 IM against the likes of Aqua’s Rika Omoto and DC teammates Bailey Andison and Zsuzsanna Jakabos.

Backstroker Masse and sprinter Coleman will combine strengths for Toronto in the 50 back as well against DC pairing DeLoof and versatile sprinter Linnea Mack.

On the men’s bacstroke side, two-time Tokyo Olympic champion Evgeny Rylov of Energy Standard will be the man to beat in both the 50 and 200 events. In the 50 back, Rylov could get some competitive edge from Toronto’s Shane Ryan and Aqua sprinters Thomas Ceccon and Matteo Rivolta.

In the women’s 200 breast, teen sensation Evgeniia Chikunova will be the swimmer to watch following her 4th-place Olympic finish. However, the breaststroke-heavy Aqua Centurions will have front-runner Martina Carraro to take a jab at Chikunova in this event. DC’s Maria Temnikova is another top-3 threat in this event along with Toronto’s Kelsey Wog.

Chikunova will join teenaged teammate Benedetta Pilato in the 50 breast, who will swim against Aqua breaststrokers Carraro and Arianna Castiglioni. DC’s Temnikova and Toronto’s Wog are also entered in a second breaststroke event.

Olympic medalists Arno Kamminga and Nicolo Martinenghi of Aqua Centurions are expected to bring the outside heat in the men’s 200 breast. Toronto pair Anton McKee and sprint-favored Fabian Schwingenschlogl could put some slight pressure on the Aqua pair. Former Michigan teammates Tommy Cope of DC and Charlie Swanson of Energy Standard will also compete professionally against one another for the first time.

Bumping down to the 50 distance, Martinenghi and Fabio Scozzoli will rep Aqua against Energy Standard’s Felipe Lima, Toronto’s McKee, and DC’s Cope and Felipe Franca Silva. That means no Arno Kamminga for the host team. Kamminga’s selection to the Aqua Centurions raised some eyebrows, as Scozzoli and Martinenghi often swam the breaststroke events together. Yet with the likes of versatile individual/relay swimmers like DC’s Hoffer, having the option to use Kamminga is making more sense strategically. He will be on the “A” medley relay as well.

Another strong Aqua breaststroker who will flex his stroke strength is Chase Kalisz, who is entered in the 200 IM alongside LCM World junior record-holder Ilya Borodin. However, DC will have fly/IMer Andreas Vazaios looming on the opposite end of the lanes.

Manaudou isn’t in Italy yet