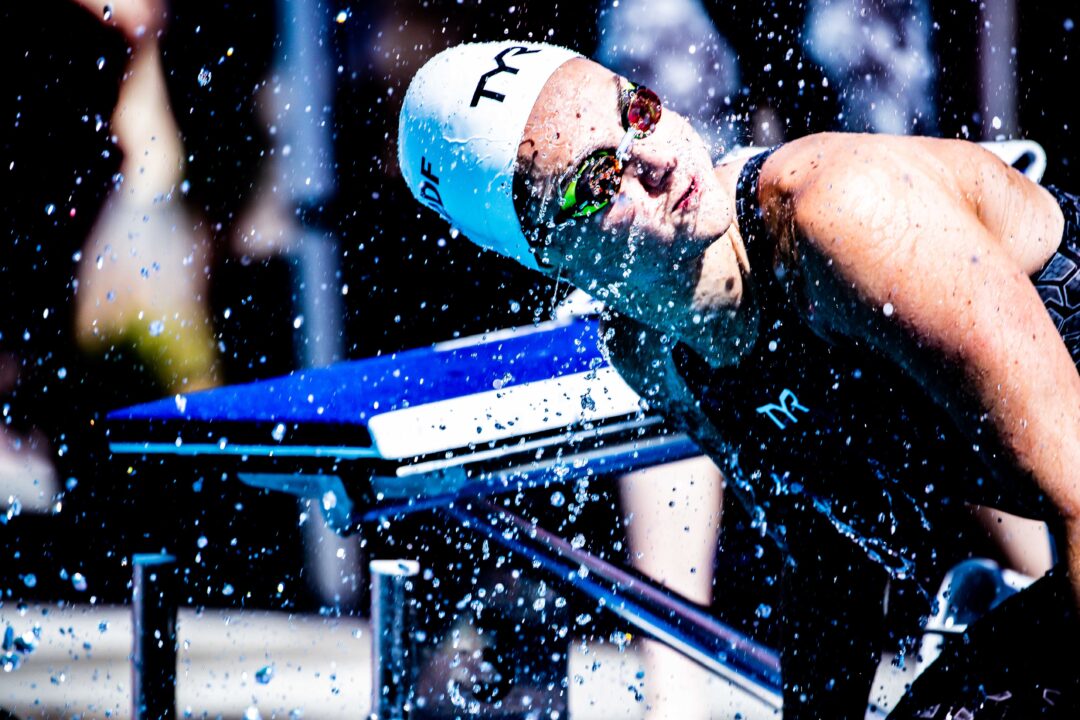 Follow along live with all the action on the fourth day of swimming at the 2021 French Olympic Trials in Chartres, France. Current photo via Jack Spitser/Spitser Photography

We’re back and we’re live for day 4 of the French Olympic Championship in Chartres, France.

In one of the shortest sessions of the meet, there will only be 3 Olympic-qualifying events in the form of the men’s 200 breaststroke, the women’s 200 butterfly, as well as the men’s 100 freestyle.

Mewen Tomac and Yohann Ndoye Brouard have yet again delivered a top 2 performance in the men’s backstroke, adding to their podium finishes in the 100 backstroke earlier on in the meet.

Tomac was victorious here, as he was in the 100, and managed to dip under 25 seconds with a 24.87 for the gold medal. That swim for Tomac was quicker than his morning swim of 25.36 and an improvement upon his PB heading into the meet of 24.94 from December 2020.

Brouard out-touched countrymate Jeremy Stravius by just 0.01 seconds as bronze medalist Stravius notched a 25.11.  Stanislas Huille rounded out the top 4 with a 25.56, adding 0.10 from his morning swim of 25.46.

This 100 backstroke heat was quick.

Both of the top 2 finishers managed to swim under Analia Pigree’s newly minted French record of 27.81 from the prelims. Pigree took the NR this morning from Beryl Gastaldello who held it at a 27.86 which she set back in 2018.

Pigree has swum 2 best times today, having entered the meet with a 28.30 meaning that she’s almost shaved a second off her PB.

Mary-Ambre Moluh was also under Pigree’s morning national record with a 27.76 which is her second French national age group record of the day.

Swiss native Nina Kost was the 3rd fastest swimmer in the final and hit a 28.48 which is actually a little slower than her morning swim of 28.36. Kost is the Swiss national record-holder in the event and holds the mark are at 28.09 which she set in March 2021.

Kost can’t win the bronze medal as she is not French meaning that Mathilde Cini will get the hardware with her time of 29.02. That was also a little over her time during the prelims of 28.99.

It looks like Antoine Viquerat has become the newest addition to the French Olympic roster with his 2:10.21 gold medal-winning swim. That got him under the required time of 2:10.35 and should be good enough to get on the flight to Tokyo.

Viquerat’s swim doesn’t make him a favorite to final at the Games but it’s a positive sign for France who didn’t send any swimmers to Tokyo for breaststroke in 2016.

The swim also allowed him to defeat top seed heading into the final Jeremy Desplanches who was a 2:13.49 in the morning and returned with a 2:13.07 in the final.

As Desplanches represents Switzerland, the silver medal will be given to Antoine Marc who swam a 2:13.51 in the final, and bronze will be Thomas Boursac Cervera Lortet with a 2:13.68.

Lara Grangeon and Lucie Delmas delivered a solid race for gold during the women’s 200 butterfly.

Qualified to race 10km open water race in Tokyo, this is the 3rd race in which Grangeon has just missed out on Olympic qualifying in pool swimming. Grangeon took gold with a 2:11.16 but couldn’t quite get under the 2:08.43 she needed.

Rounding out the podium, Lilou Ressencourt established a 2:12.46 for the bronze medal, shaving some time off her 2:14.82 in the heats.

Cyrielle Duhamel who has qualified to race the 200 IM in Tokyo followed with a 4th place finish in 2:14.63.

It was all Maxime Grousset here in the men’s 100 freestyle final as he touched in a 47.89 which is well under the FINA A and should be good enough to get him into the event individually this summer.

Manaudou scratched the 100 freestyle but is already qualified to swim the 50 freestyle individually.

The silver medal here went to Charles Rihoux with a 48.81 which is a new PB, improving upon the 48.93 he swam this morning. Today was the first time that Rihoux was under 49 seconds, having held a PB of 49.04 prior to the meet which he swam at the 2021 European Swimming Championships.

While only Grousset got under the FINA A, another 3 men managed to crack 49 seconds here. Clément Mignon swam a 48.89 to take the bronze medal while Mehdy Metella notched a 48.93 for 4th and Julien Berol a 48.93 for 5th.

Is 50 back an Olympic event now?

Is Florent swimming the 100 free?

No. He has scratched the final.
He said he felt good in prelims until the last 20 meters when the piano….
He’s focused on the 50 free.

He will be part of the relay in Tokyo.

Nah, he took the distance events off the program 🙂

If only we had the same kind of prospects in women’s breaststroke….
Why does breaststroke structurally struggle for a while on the women’s side?

He’s a contender for the final.
Winning the gold will be the goal in Paris.

For Paris 2024 I have at least 8 swimmers with more chances of gold..: so, Grousset contender for the final also at Paris 2024?

WE DON’T LOSE AT HOME!

I’m hoping you can win at least one at home, which is unlikely.

Yes, at least everyone who is faster already and of similar age (Miressi, Kolesnikov, Minakov, Chalmers, Dressel, Nemeth, Apple) and everyone who is younger and pretty close time-wise (Whittle, Popovici, Milak, Hwang). Also not sure if guys like Richards, Dean, Mityukov, Rylov or Alexy have a much smaller chance than Grousset.

Anyways: I think at this point it is pretty clear that Bobo is either trolling or just lost touch with reality.

Dressel, Chalmers, Kolesnikov, Miressi, Minakov, Apple: six swimmers with a faster PB than Grousset, and each of them wants swim his best at Tokyo. Anyway, good improvements for Grousset in this season, congrats.

That’s why I only say he’s a contender for the final in Tokyo.
I’m realistic.

And most of those guys are Grousset’s age or younger and even Dressel and Apple are young enough that they will still be around their primes in 2024… so not sure he has a better chance in Paris either.