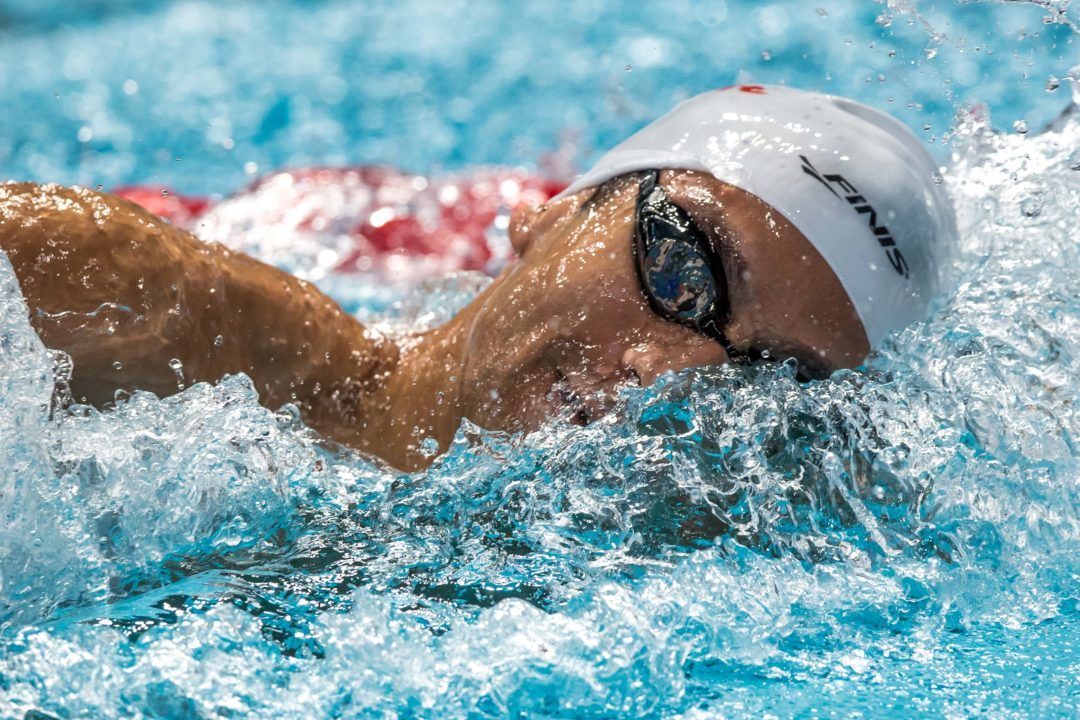 He had the only sub-8:00 time of 7:52.19, a lifetime best by over three seconds. That brings him within three seconds of the Egyptian national record. Archive photo via Mike Lewis/Ola Vista Photography

Action at Indianapolis’s site of the 2020 U.S. Open kicked off this afternoon with the 800 free.

Indiana Swim Club’s Marwan El Kamash shot out to a lead in the men’s top-seeded heat and never relinquished it, winning in the only sub-8:00 time of 7:52.19, a lifetime best by over three seconds. That brings him within three seconds of the Egyptian national record.

Indiana University sophomore Michael Brinegar led the pack in a tight race behind El Kamash, going 8:03.00 and coming eight seconds off of his best. University of Michigan freshman Jake Mitchell was third in 8:03.11, followed by Louisville University junior Hayden Curley (8:04.06) in a lifetime best.

Notre Dame sophomore Jack Hoagland had a great swim out of the second heat, going under nine minutes for the first time with an 8:07.36.

Lakeside Swim Team’s Mariah Denigan, an Indiana University commit, took second place with an 8:36.72. That’s her fifth-best outing ever in this event, off of her lifetime best of 8:28.15 from the 2018 U.S. Summer Nationals. She’s almost two seconds better than she was at this meet in 2019.

Don’t know if you said this anywhere, but what sites will you be posting recaps for?

Since tonight is only 800s, we won’t be doing anything live, but in future sessions we’ll do Indy, Greensboro, Sarasota, and Irvine live, the rest shortly after they’re done.

Beaverton may or may not happen tonight lol. It was pretty sparse.

Yes! Thanks SwimSwam – all was the only real answer.

Yeah and thanks! It will be hard to follow all the happenings at different sites and time zone.

Just out of curiosity and checked usaswimming website – seems only have streaming for Indy, Irvine and Greensboro.

The Kornacki of swimming.

“Since tonight is only the 800s…” Wow, way to make all those swimmers feel unimportant. As a parent of a distance swimmer, it’s a little frustrating to hear people complain about the state of US distance swimming and then read comments like that.

@HoosierEli this is about the fact there is only one event tonight at each of the nine sites. Doing a live recap is technically what we’re doing… we’re just not publishing the article outline pre-session. If it was only the 50 free tonight, we’d do the same thing.

My bad everyone. Just a tad bit over-sensitive! 🙂 THANKS to SwimSwam for all of their coverage

Don’t let Karl fool you. If it were a 50 free and Dressel was in it, there would be live interviews.

He’s referring to the number of events chief, not the 800 itself

Think you totally misconstrued his comment. He used only in the literal definition, not the inferred negative connotation. You’re gonna need thicker skin to survive in the comment section, son

He transferred to Cal

“Notre Dame sophomore Jack Hoagland had a great swim out of the second heat, going under nine minutes for the first time with an 8:07.36.”