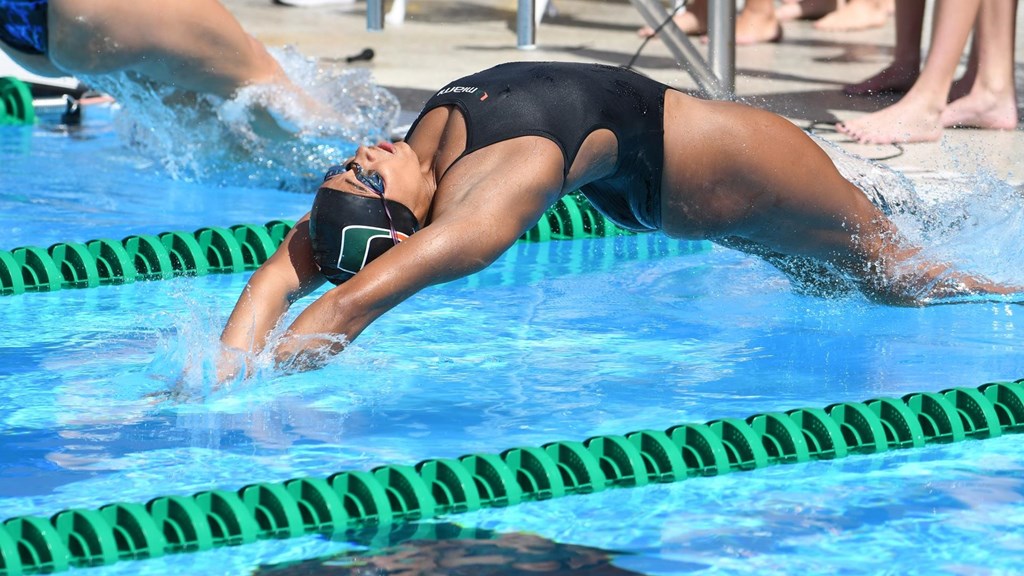 The University of Miami took a 25-point lead over Vanderbilt at the conclusion of Day 1 of their dual, though Vanderbilt's depth shines through. Current photo via Miami Athletics

Miami won all 5 events contested on Wednesday, and even finished 1-2 in both the 500 freestyle and 200 IM. First, in the 200 freestyle relay, the team of Savannah Barr, Carmen San Nicolas Martinez, Emma Sundstrand, and Sydney Knapp won in 1:33.44, with Knapp producing the fastest split in the field at 22.94. The only other swimmer to crack 23 was Vanderbilt’s Tonner Debeer who anchored her ‘A’ team in 22.98 for a total time of 1:34.20.

Barr switched gears once the relay was over and placed 2nd in the 500 behind teammate Aino Otava who cleaved a massive 7 seconds from her lifetime best and produced the sixth-fastest time in program history. Barr, meanwhile, finished in 4:52.53, which is within 2 seconds of her lifetime best. Otava and Barr were the only competitors to break 5 minutes on Wednesday in the 500.

Miami was especially dominant in the 400 medley relay where the team of Alaina Skellet, Sundstrand, Isabel Traba, and Barr won by nearly 5 seconds in 3:42.44. Sunderstrand was particularly important to Miami by delivering a 1:01.45 breaststroke split, the fastest in the field by 2 seconds. Debeer, meanwhile, had the fastest butterfly split of the field with a 54.62 for the Vanderbilt ‘A’ team, which finished in 3:47.13. No swimmer went under 50 seconds on the freestyle leg of the relay, but Knapp was the closest to doing so, anchoring Miami’s ‘B’ team in 50.12.

Scoring for this meet is interesting in that the top-4 finishers are awarded points as if they were finishing in the top-4 at a traditional invitational or championship meet, whereas the swimmers that place 5th through 8th score as if they were finishing 9th through 12th in a traditional championship meet. This means that points are awarded accordingly: