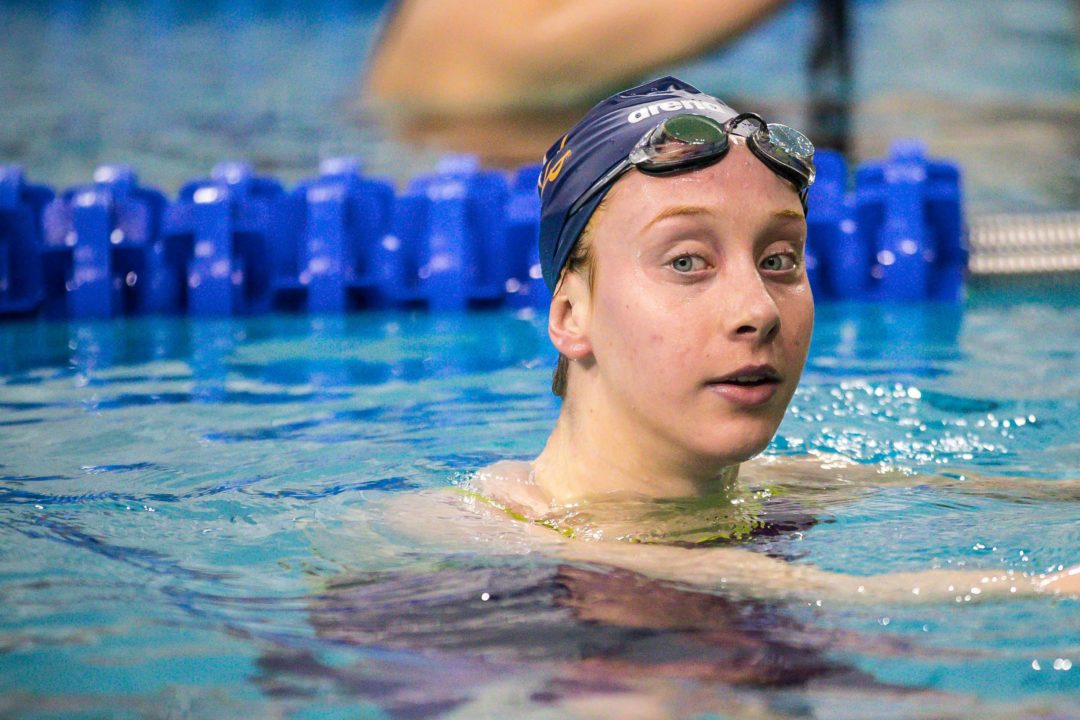 We kick off this morning with the 500 free, where 2019 NCAA runner-up Paige Madden leads the Virginia Cavaliers into heats. Archive photo via Jack Spitser/Spitser Photography

We kick off this morning with the 500 free, where 2019 NCAA runner-up Paige Madden leads the Virginia Cavaliers into heats. Madden was second in this event last year behind two-time conference champ Mallory Comerford, but outdid Comerford’s time at NCAAs when Comerford switched to the 50 free. Madden could challenge the meet record from 2016 today. NC State’s Kathleen Moore also returns from last year’s top three.

The big question will be where we’ll see star Virginia freshman Kate Douglass swim. Douglass entered the 200 IM and 50 free and is the top seed in both, though she’ll almost-assuredly drop one or the other to leave two individual entries for the next two days of the meet. Her career-bests (1:52.84 and 21.53) are already under the ACC meet records in both races, and she’s got a great chance to smash overall conference records in either event as well. Update: Douglass will swim the IM today and not the 50.

NC State’s Julia Poole returns as the defending champ in the 200 IM – six of the eight A finalists from a year ago return. In the 50 free, Virginia’s Morgan Hill is the defending champion and the entire top 8 return from last year. Hill touched out NC State’s Ky-Lee Perry by .01 to win the race last year, and they’ll get a rematch of that battle today.

Keep refreshing this page for live, event-by-event updates of all the action from Greensboro.

Virginia freshman Madelyn Donohoe was second in 4:42.68, a career-best by about a second.

NC State’s foursome are senior Makayla Sargent, junior Kathleen Moore, freshman Katharine Foley and senior Mackenzie Glover. Moore was third last year and had a solid prelims-to-finals drop, so she might be the top threat to Madden tonight. Glover scratched out of this meet entirely last year, and Sargent didn’t swim the 500 free. Maybe the biggest story of the bunch is freshman Katharine Foley, who cut more than five seconds from seed and about three seconds from her high school personal best this morning.

It was a good event for Notre Dame, with two A finalists. Abigail Dolan was 8th last year and will look to have a better prelims-to-finals transition this year after qualifying fourth. The sophomore Luciana Thomas was 9th in the IM last year, but swapped for the 500 this season to make the A final.

It’s a young conference in the 200 IM – half of the A finalists are freshmen and one more a sophomore. There are also zero seniors in the top 8.

Virginia once again sits 1-2 on a morning where their top athletes are clearly showing up to compete. Kate Douglass broke the ACC meet record in a pretty casual swim for her, going 1:53.90. (Douglass was 1:52.84 earlier this season to set the conference record). Virginia junior Abigail Richter sits second; she was second in this event a year ago in 1:55.92 and was four tenths faster this morning.

Last year it was NC State going 1-2 in prelims. Defending champ Julia Poole was fourth this morning in 1:55.63, which is actually four tenths faster than she went in taking the top prelims spot a year ago. That shows how much faster the conference has gotten in this particular event.

That’s due to the influx of freshmen: Douglass, her teammate Ella Nelson (listed in results as Margaret), Notre Dame’s Coleen Gillilan and Louisville’s Abigail Hay. Nelson cut from a career-best 1:57.7 to 1:55.9 this morning. Gillilan shaved a hundredth from her high school personal best. Hay was the big dropper, going from a lifetime-best 2:00.4 out of high school to 1:59.1 in a first-chance meet last week to 1:57.28 this morning.

Even the returners are swimming much faster. UNC’s Caroline Hauder was 1:58.7 in prelims last year and took 8th in the final in 2:00. She went 1:55.59 this morning for third overall, a good early return for UNC’s new coaching staff.

Last year’s 3rd and 4th place finishers both missed the A final – that was Louisville’s Grace Oglesby and NC State’s Sophie Hansson. They’ll show down in the B final.

Once again, NC State and UVA are set up pretty well with scorers. Virginia has one more A finalist, but NC State put three into the B final and has three more scorers than Virginia in this event.

Alyssa Marsh out of Duke is the top qualifier in 21.78. Marsh cuts more than a tenth from her mid-season best and is already well ahead of her 22.0 from this meet last year.

Virginia Tech gets its first A finalist of the meet so far in Joelle Vereb, who swam 100 fly/100 breast/100 free last year. Vereb was 22.26 this morning, a tenth off her best.

Keep an eye, too, on Louisville, which only has 4 A finalists but also has 12 scoring swims set up. Keep an eye out for our full up/down analysis coming soon.

So I can watch nearly every dual meet on ESPN but can’t even get a static camera for prelims at conference championships? Sad.

Is there a prelims stream?

ACC Network if you can get it!

Only finals. ACC network is currently showing a re-air of their talk show. You can watch the ivies and A-10 on Espn+ and SEC on SEC network. But no ACC prelims. WtF.

Ella Nelson is on fire geez

Last night I was going to the roster saying “who is this Margaret Nelson going 1:44??” 🙂