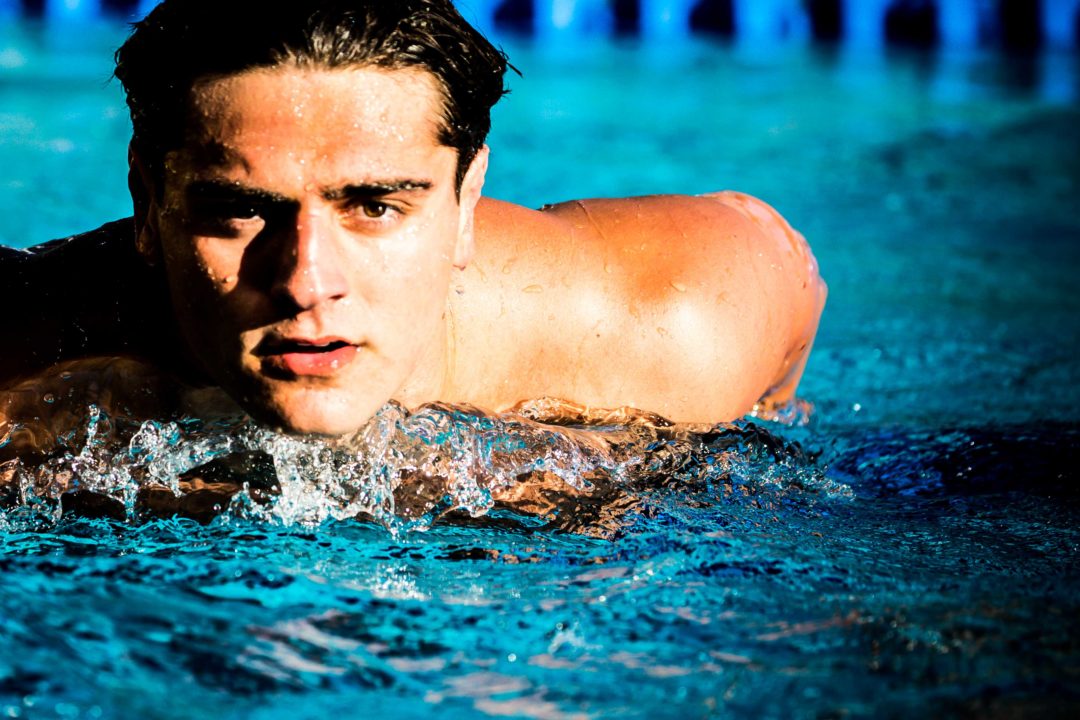 The Texas Longhorns are still waiting on Austin Katz to perform to previous levels, but if he does, the ceiling for the Texas men is a national championship. Archive photo via Jack Spitser/Spitser Photography

More and more teams are starting to return to competition amid the pandemic, and though we don’t have our usual volume of in-season swims to analyze, we’re continuing to get a clearer picture of what the NCAA landscape looks like.

That includes a decent amount of shuffling within our top 10 teams from the last round of rankings.

Without further ado, here are our men’s NCAA power rankings, with changes from our previous ranks noted in red or green. Unranked teams joining the top 25 are listed with just a plus sign.

Brooks Fail and David Schlicht should put up solid points. Schlicht is #2 in the Swimulator in the 400 IM, and Fail will almost-certainly outscore his current Swimulator projection of 9 individual points.

Mark Gangloff has the Tar Heels rolling in his 2nd season as head coach. Tyler Hill is a breakout swimmer and UNC has some good relays too.

Jack Hoagland‘s head-turning swims at Notre Dame’s last meet helps soften the loss of Zach Yeadon on a transfer to Cal. The Irish also have better relays than lots of teams in this 18-22 range.

The three musketeers: Miami’s off-beat diving-only men’s team continues to click along. All-American Zach Cooper returns alongside ACC finalist Brodie Scapens. Freshman Max Flory is a member of the US National Team system and could boost the Hurricanes’ scoring in March.

Minnesota lost a dual meet to rivals Wisconsin, but Max McHugh was a monster for the Gophers. Is he good enough to carry some relays into scoring range, Lilly King-style?

Juan Hernandez won a big diving matchup against Texas A&M’s Kurtis Mathews in a dual meet last weekend. It may not be a big team for the Tigers at NCAAs, but he and Brooks Curry could hit 80 or 90 points between them.

The Hokies don’t have any huge names (yet), but they bring back essentially the same team that was projected to finish 17th at NCAAs last year, and have been looking solid all season.

The Vols have a great sprint group, and the medleys look tough: they sit 6th in the 400 medley and 10th in the 200 medley. All five relays are projected to score in the current Swimulator ranks. Kayky Mota has been a difference-maker.

It’s time for the country to recognize how good Caio Pumputis is. With Christian Ferraro and Kyle Barone, the Yellow Jackets have multiple top-8 caliber relays. This is the year where they need to break through in March to sustain their growth over the last few years.

Jeremy Kipp didn’t step into an easy situation at USC. A depleted roster and challenges around training a team in the heart of America’s pandemic. It’s kind of a guess at this point where the Trojans will be. We’ll be able to peg them much better in 2 weeks.

The Alabama men looked “ok” in their first meet after the resignation of head coach Coley Stickels in December, beating Kentucky by 25. There’s some continuity with Ozzie Quevedo finishing out the season, but Alabama should beat Kentucky by more than 25.

The Tigers have shown 4 really good relays so far. In this strange pandemic year, it feels like that’s going to count for a lot.

The Virginia men don’t have a singular star like their women do (in spades), but they have 5 really good relays.

Two weeks out of the water with two weeks to go before Big Tens is brutal for the Wolverine men. Mike Bottom will be really earning his paycheck if he can figure out how to get the Michigan men into the top 10 at NCAAs.

The Stanford men will get their first official racing opportunity this weekend, so we’ll learn a lot more then.

There’s very little data to go off of right now for Ohio State, but we know and trust the talent they’ve got across the board with swimmers like Paul DeLakis and divers like Lyle Yost.

The 200 medley relay has been throwing down some great in-season times, and the Cardinals have been known to only get fastest as the season goes on.

They were looking vulnerable in the fall, but have been shored up by the return of the four international swimers they exepcted to have this year, including 44.9 backstoker Kacper Stokowski.

Shaine Casas is a bona fide collegiate superstar, but the rest of the A&M lineup continues to rise to the challenge as well. Tanner Olson is the #2 ranked 100 breaststroker in the NCAA this season, for example. These Aggies are probably still 1 stud away from a top 3-4 finish. SEC Champion diver Kurtis Mathews is probably the difference between a fuller-strength NC State team and the Aggies right now.

No Bruno Blaskovic yet for Indiana. Indiana needs his sprint speed on their relays if they’re going to make a push for the top 3.

We know that Florida has two big-time swimmers in Robert Finke and Kieran Smith. The rest of their lineup hasn’t shown much this season. The Gators are taking a ‘one shot’ approach to NCAA qualifying in much of their lineup via the SEC Championships. In a COVID-year, that’s a risky play.

3rd-5th is a little bit of a crapshoot this year. Cal and Texas will eat up a lot of points that it could narrow the margins. Georgia has ‘performed’ better than Indiana or Florida this season, so they get the edge for now.

The Swimulator margin looks brutal… but it’s worth keeping in mind that Cal (like much of the Pac-12) has had very limited competition opportunities. And most Cal studs only really geared up for one event, leading to some real Swimulator anamolies like Ryan Hoffer (1st in the 50 free at 18.97 but just 22nd in the 100 fly at 46.43) or Sean Grieshop (5th in the 400 IM at 3:42.69, but not even in the top 25 in the 500 free). Essentially the tie-breaker for us in this dead-even #1 battle was that Cal has more likely three-event scorers, while Texas’s roster has more one-event scorers – and that may add up in the NCAA format. It looks like Hugo Gonzales is staying in Spain for this season, so that does hurt for Cal.

We still haven’t seen much from star backstroker Austin Katz. One way to look at it: Texas has a lower floor than Cal, but a higher ceiling. Coach Eddie Reese is going to have to make some tough NCAA roster decisions with limited in-season data to go on. But having too many NCAA qualifiers is truly a good problem to have – especially when possible COVID disruptions are in play. Texas also has a lead of nearly 400 points over Cal in the Swimulator.

Wonder what the odds are of SMU joining the Big 12? They are getting better in a hurry, and have the facilities. Seems like such a natural fit

I wish it would happen. Would be a great fit in a lot of ways.

Seems like these sort of conference mashups are harder to pull off with the bigger conferences, though.

I don’t think USC & Stanford this weekend. USC is coming from more than 150 mile range. Therefore in Santa Clara county, unless USC quarantine for ten days, they probably cannot compete at Stanford. Restrictions are sooo crazy

Lol how does Texas have a higher ceiling than Cal? Cal has had one meet this season and they weren’t even rested. While Texas has swam multiple meets with at least one of them rested.

What’s happening with Austin Katz? Is he injured or something? I thought he’d be in the running for an Olympic spot in the 200 back.

Austin is good. Training well, and getting ready to throw down some strong swims in Feb/Mar. #hookem

UGA has been looking great this season, but I wonder if Urlando will be back. If he had an injury/illness or something that hurts UGA’s chance of finishing 3rd.
Also, Swimswam used to publish a chart of how each author ranked the teams, has that changed now?

urlando will be back for SEC’s

Miami (FL) being on here is seriously a joke. They should not even be considered for these rankings.

Must be nice to live in a dream land where you can ignore the reality of the world to make some grand philisophical statement.

Those who actually have to like, do things, don’t get that luxury.

How high are you rn?

I can’t upvote this enough!

MAN-VOLS 17th? Is ya crazy??? We almost beat UGA except for the fact we jumped on our 400 fr relay in the dual meet! We beat Virginy!! Why does everyone diss on our coonskinned barefeeted mans from the mountains of TN? We got divers and a great break stroker and a great buttflyer. We can finish top 10?

Your “man-vols” (ugh) lost convincingly to Virginia, in fact.

Vols are solid and probably underrated.

However, no Luca AND the Dawgs weren’t suited (except for a few individuals who were probably competing to be on the SEC team). Margin definitely could have been a lot bigger.

Mota woulda beat Luca like a puppidawg..and the dawgs did to wear bathin suit! The manVOLS really won except for the darn timer malfunction what called a DQ on them coonskinneded barfeeted mountain boyz