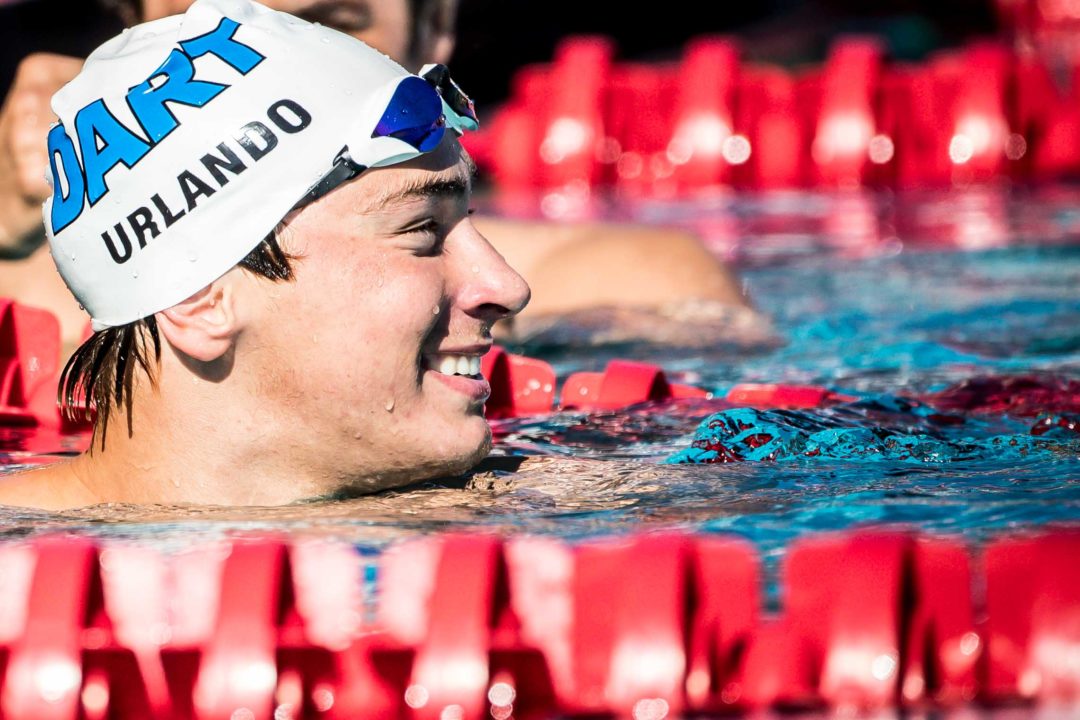 We'll see a Worlds team member in the men's 200 fly as Justin Wright will be in the mix, but teenage star Luca Urlando looks like the man to beat in this one. Archive photo via Jack Spitser/Spitser Photography

Tonight marks the first finals session at the 2019 U.S. National Championships in Palo Alto, California. Swimmers will be competing for titles in the men’s and women’s 200 fly and 100 free. We’ll see the women’s 800 free tonight while the men compete in the mile. Relay action at the end of the session includes the men’s 4×100 free relay.

Regan Smith, who just crushed the World Record in the 200 back in Gwangju, headlines the women’s 200 fly final. We’ll see another Worlds team member in the men’s version of that race as Justin Wright will be in the mix, but teenage star Luca Urlando looks like the man to beat in this one.

Abbey Weitzeil, the top seed in the women’s 100 free, is seeking a win tonight after traveling back from Gwangju. Jack Conger will swim in the men’s 100 free final, but Ryan Held leads the way there after smashing the U.S. Open Record this morning in 47.43. Also breaking 48 this morning was Maxime Rooney, the 2nd seed.

World Champion Regan Smith brought home the national title in this race. In a close battle for the win between the top 3 women, Smith was able to hold off Lillie Nordmann for the win, 2:07.26 to 2:07.43. That was a best for Smith by a couple of tenths and a best for Nordmann by nearly 2 seconds.

Luca Urlando was just over a second shy of his best time from earlier this year, but still a second ahead of the field as he took the win here in 1:54.92. Miles Smachlo dropped another second from his best time set in prelims, out-touching Nicolas Albiero 1:55.94 to 1:56.05. Albiero’s time was a best by over half a second.

Though he scratched tonight, Tom Shields remains in the top 6 for national team consideration with his 1:56.12 from prelims. Urlando, Smachlo, Albiero, and Julian are also on that list.

Abbey Weitzeil set a new best time in this event for the first time since 2016. Weitzeil dominated in 53.18, taking a tenth off her former best of 53.28 from 2016 Olympic Trials. Gretchen Walsh remains #3 all-time in the 15-16 age group. Erika Brown out-split her on the back half as they tied for 2nd place in 54.13. It was a best time for both swimmers.

Catie Deloof (UN) was just a tenth off the podium in a lifetime best 54.28. She user her back-half speed to out-touch Natalie Hinds (ABSC), who took 5th in 54.34. Hinds has now lowered her best time by over a full second this year. She returned to competition for her first long course meet since 2016 at the Pro Swim Series this year. Worlds team member Allison Schmitt was 6th in 54.81.

Maxime Rooney and Tate Jackson, now training partners at Texas, both lowered their bests from prelims as well. Rooney hit the wall 2nd in 47.61 and Jackson was close behind for 3rd in 47.88. All 3 men broke 48 for the first time today. Another man currently training at Texas, Dean Farris (HARV), was just off the podium with a lifetime best 48.07. Held, Rooney, and Jackson are in the top 6 in terms of national team rankings. Farris missed the top 6 by just 6 hundredths.

Daniel Krueger kept the line of Texas men going as her rounded out the top 5 in 48.55. Worlds team member Jack Conger, who swam the 100 fly in Gwangju, touched 6th in this final with a 48.64.

Worlds team member Ally McHugh was well behind the top 3 through the halfway mark, but used her back-half speed to bring home the title in 8:26.04. She pulled into the lead with 100 meters to go and sealed the deal in 8:26.04. Sierra Schmidt had a breakthrough swim to take 2nd in this race, clipping Worlds mile finalist Ashley Twichell for 2nd place in 8:27.13 to Twichell’s 8:27.36.

This was the first time Schmidt has gone a best time in this race in 4 years, lowering her former best from 2015 by a couple of tenths. McHugh, Schmidt, and Twichell all currently rank in the top 6 for national team contention.

Haley Anderson (TROJ) was 4th in the finals heat with an 8:29.11, but placed 5th overall. Taking 4th with her time from the early heats was Kensey McMahon (BAMA), who dropped nearly 9 seconds this afternoon in 8:28.68.

Robert Finke, a 2017 Worlds team member for the USA, earned his first national title in this event tonight. Finke, who withdrew from the World University Games due to a wrist injury earlier this summer, touched 5 seconds ahead of the field in 14:51.15. Zane Grothe was the only other man under 15:00 tonight.

Katz reached the wall in 15:05.93. That’s a drop of almost 20 seconds and good for 4th place. Jake Mitchell (CSC) was the fastest man out of the early heats. Mitchell dropped almost 25 seconds with a 15:11.52 and wound up placing 5th overall.

It was a close race for the title between Ohio State and the Australian squad. Elijah Winnington led off in 49.70 to give the Aussies the lead by hundredths. Louis Townsend stretched that lead out a bit with a 48.82 on the 2nd leg. The teams’ 3rd leg splits were dead even as Matthew Temple (AUS) and Matthew Abeysinghe (OSU) each rolled to a 50.16. It came down to the final leg, where Ohio State’s Paul DeLakis anchored them to victory in 49.39.

Regan tired. Still a best time for her. The women’s 200 fly is weak right now at the international level. Anything can happen in Tokyo. Good to see finally some new blood coming from US teenagers.
Urlando clearly not tapered for that meet. World juniors is the big goal.
Abbey not tired. A new best time. She’s on the right track. Very happy for her after tough years since Rio.
Gretchen Walsh can be that 4th major piece next year of the women’s 4X100 free relay with Simone, Mallory and Abbey to beat Australia.
Was it a 49-meter pool just for the men’s 100 free? Amazing times! Amazing depth! 😯
There’s really a sprint revolution… Read more »

Aussies are usually faster at their Trials than the Olympics….

Getting loca over Luca and i’m a guy. Is something wrong with me?

Behind the US and Russia it seems to be quite open. Neither Brazil nor Australia have been convincing recently.

Omega timing does not list the 100 free C and D finals.