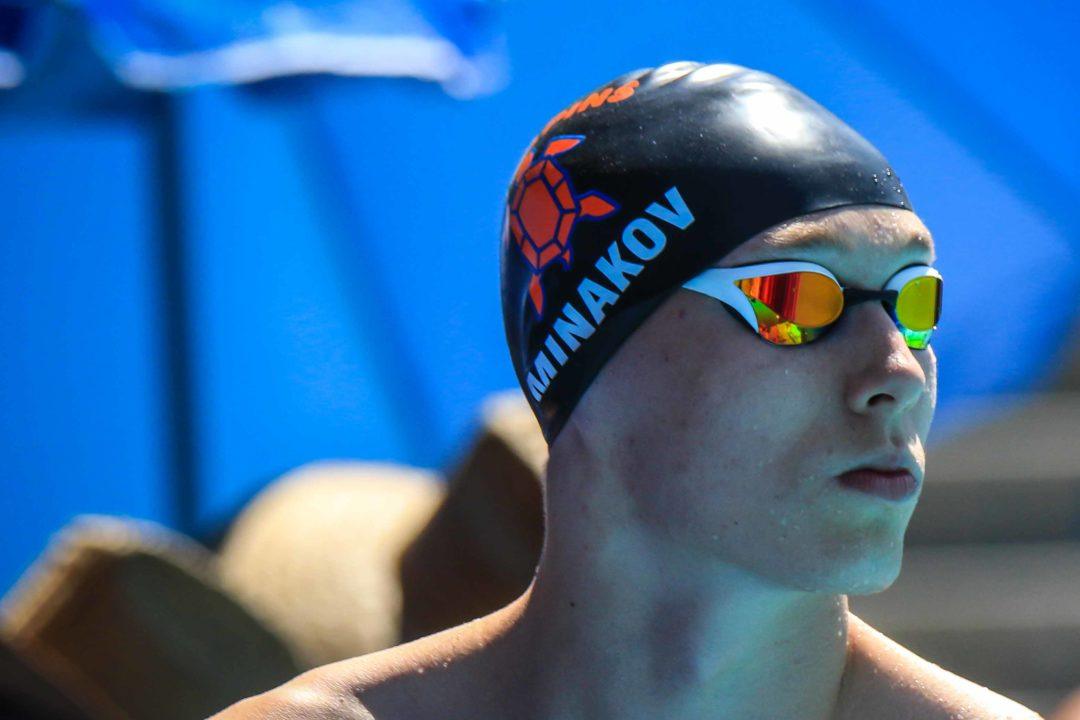 The 2019 World Junior Male Swammy Award goes to Russia’s Andrei Minakov. Minakov had more sustained success across multiple meets than any other junior swimmer this year. That included a highlight of individual silver in the 100 fly at the World Championships to go with a 400 free relay silver and 400 medley relay bronze.

To be eligible for this award, athletes must still be 18-years old or younger by the end of the year.

Having broken the Russian national record in 2018, Minakov swam the 100 fly as his sole individual event at the senior World Championships in 2019. Hitting a 51.54 in the heats, Minakov advanced third to semis, where he swam a 50.94 to better his own Russian national record and qualify second into the final. Minakov’s semifinal performance had him swim right next to Caeleb Dressel as Dressel broke the World Record. In the final, Minakov managed to keep step with Dressel and claimed his first senior international medal with a 50.83 for silver and bettered his own national record for the second time that meet. The next day, Minakov swam the fly leg of the men’s 4×100 medley, hitting a 50.54 which was the second fastest split in the final, after Dressel. His split helped teammates Evgeny Rylov, Kirill Prigoda and Vlad Morozov to a 3:28.81 finish, setting a Russian national record on their way to a bronze medal finish behind Great Britain and the US.

Coming away from Gwangju with a silver, bronze and two new national records, Minakov rode that momentum all the way to Budapest for the World Junior Championships where he would have a rather busier lineup this time around. Minakov raced in 4 relays (2 men’s and 2 mixed) as well as the 50 fly, 100 fly and 100 fly individually and he earned medals in all 7 of the events.

Of note, the men’s 4×100 medley relay was fast enough to set both the world junior record and championship record with a 3:33.19. Joining Minakov on the relay was Nikolay Zuev, Vladislav Gerasimenko and Aleksandr. Minakov’s 7 medals contributed heavily to the Russian’s 22 total medal count, giving them a second place finish at the meet behind the American’s 37. His performance at World Juniors earned him the title of male swimmer of the meet.

As if that wasn’t enough, a few weeks before Worlds, he won 6 medals, including 4 gold, at the European Junior Championships

Earlier in the year, Minakov was signed to represent Energy Standard in the ISL but ultimately ended up withdrawing in order to preserve his NCAA eligibility. A few weeks after this announcement, he announced his verbal commitment to Stanford via Instagram.

Ending the summer with 16 international medals, two national records and a world junior record, Minakov’s success as a teenager places him among the best swimmers already of the highly competitive Russian swimming scene.

Very deserved winner, but I think Apostolos Papastamos was worth a mention. Double IM gold at Euro Juniors, followed by gold a WJR at World Juniors in the 400IM. How many other WJRs were broken in 2019?

Anyone no where to find USA Swimming’s 2019 World 100 list for 18&U? I’ve seen some postings about it elsewhere but can’t find the actual list.