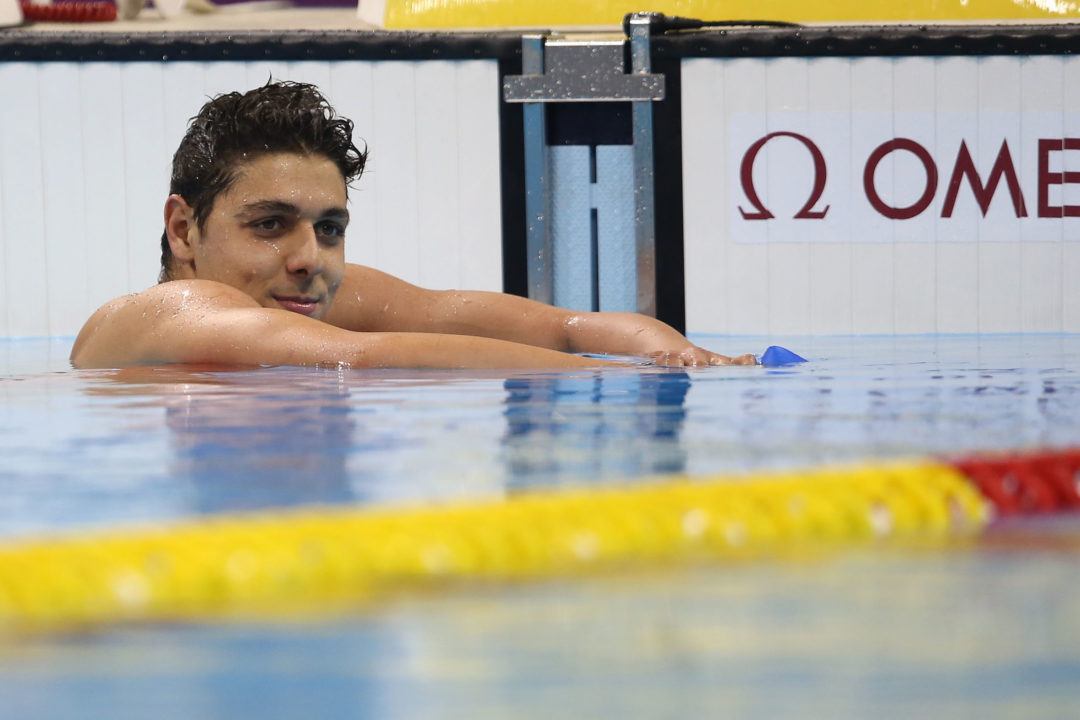 Indiana's Vini Lanza is a safe enough bet to win this race. (Not that you should be gambling on swimming.) Current photo via Satiro Sodre/SS Press

The class of 2018 graduated the two fastest 100 yard butterflyers of all time: Caeleb Dressel and Joseph Schooling. Schooling won this event in 2015 and 2016, while Dressel won in 2017 and 2018. At each of the previous three NCAA Championships–2016, 2017, and 2018–the NCAA and U.S. Open records were lowered in this race, with the American Record also being lowered the past two.

Borrowing a convergent statistic from the 100 freestyle preview, “there are nine returning swimmers who have lifetime bests at-or-faster than the [45.29] it took to make the A-final last year” in the men’s 100 butterfly.

Add to that Towson’s Jack Saunderson, who swam a 51.48 in long course over the summer (which converts to 44.7 with the Swimulator Real-Time Converter).

Indiana’s Vini Lanza, last year’s third-place finisher, has the fastest lifetime best in the field by just over three-tenths. Lanza had a huge 2018 and has played an integral role in Indiana’s ascent through the NCAA standings the past three seasons. At the 2018 B1G Championships, Lanza won a record seven gold medals, taking individual titles in the 100 fly, 200 fly, and 200 IM. At the 2018 NCAA Championships, Lanza placed third in the 100 fly in 44.50, shaving 0.29 from his PR set one month prior. Having also placed third in the 200 fly at last year’s NCAA Championships, Lanza is one of the most experienced racers in the field and has proven that he can step up and swim fast in the morning and again at night.

Coleman Stewart surprised at the 2018 NCAA Championships with a blistering 44.84 to win the ‘B’ final with a time that would have been fast enough for 5th overall, had he been just a little quicker in the prelims. Stewart came back later in the session to win the 100 backstroke out of lane 1 in 44.58. Overall, Stewart dropped 0.27 from the 2018 ACC Championships to the 2018 NCAA Championships. This season, Stewart has been 45.11 in the 100 fly and 44.36 in the 100 back. Though the former is not a best time, if he is able to bring his fly down to within 3/10ths of his current backstroke time, like he did at NCAAs last year, then he should have no problem getting into the ‘A’ final, and possibly evening winning the race.

Florida Gator Maxime Rooney was a freestyler lasts year, but this season at SECs surprised the country with a dramatic, and successful, shift to the butterfly races. He has also taken a page from former teammate Dressel’s playbook and been working on swimming the 100 fly with a no-breather final 25. If he can equal or improve upon his SEC performance he should be a lock for the ‘A’ final. At SECs, Rooney improved his time by over 1.5 seconds, dropping from a 46.61 to a 45.06. Dropping that much time twice in the same race in a single season would be a miracle at this level, so instead of predicting another insane time drop, it’s probably just safe to bet on Rooney backing up his performance from February with another that is just as good or slightly better.

Auburn’s Liam McCloskey also had a massive time drop at the 2019 SEC Championships where he finished just five one-hundredths behind Rooney, taking silver. If McCloskey, who is seeded 6th, can replicate or improve upon his performance from SECs, he could find himself in the ‘A’ final as well.

SEC bronze medalist in the 100 fly Camden Murphy is another to watch out for. Murphy is a former titan of age group swimming, known swapping the 100 fly NAG Record with Michael Andrew on multiple occasions. Now in his sophomore year at the University of Georgia, Murphy has shaved 0.49 from his 2018 best time, which stood as his lifetime best until the 2018 Georgia Fall Invite. Murphy and Rooney also raced the 200 fly at SECs, and Murphy came out on top, 1:40.62 to Rooney’s 1:40.87. Murphy is ranked 4th in the 200 fly while Rooney is ranked 7th. Having both speed and endurance, Murphy is a formidable contender.

Cal’s Zheng Quah and Texas’s Tate Jackson are also looking dangerous this season, for similar yet different reasons. Quah was within hundredths of his 2017 lifetime best at the Pac-12 Championships, swimming to victory in 45.13. He is currently ranked 2nd in the 200 fly as well, with a blistering 1:39.29 from Pac-12s. Quah’s best time in the 200 fly is faster still at 1:38.83, making him the 3rd-fastest performer all-time. Jackson, meanwhile, is the number one seed in the 100 freestyle with a 41.06, making him the 6th-fastest performer in history. Jackson is only ranked 26th in the 100 fly this season, but his freestyle times could signify that he’s due another astounding swim, this one in his third event. Quah, who is ranked 7th going into the meet, finished in 12th last year, despite placing 5th in 2017 when he recorded his personal best of 45.06.

Florida State senior Kanoa Kaleoaloha up-ended both Stewart and Albiero in the 100 fly at ACCs, touching in 44.93 to Stewarts’s 45.09 and Albiero’s 45.37. NC State’s Noah Hensley was also in the mix, and touched just ahead of Albiero for 3rd in 45.33. Kaleoaloha also won the 100 free at ACCs, and contributed a very fast 19.96 50 fly split on Florida State’s 200 medley relay. While he dropped time in some events at NCAAs last season, in the 100 fly he added 8-tenths and missed scoring altogether.

Cal sophomore Ryan Hoffer returns to the NCAA Championships with a season-best time of 45.60, ranked 19th. Last year in his NCAA debut, Hoffer swam two best times in a day, first going 45.29 in prelims, and then 44.93 in finals, good for 6th. If Hoffer’s back-end speed is prime, he should be 45-low or 44-high without much problem.

And finally, let’s circle back around to Jack Saunderson of Towson University. At last summer’s USA Swimming National Championships, Saunderson blasted a 51.48 in the prelims of the 100 fly, which he followed up with a 51.88 in finals. With that performance, Saunderson punched his ticket to the 2019 World University Games in Naples, Italy, in July. At last year’s NCAA Championships, Saunderson finished 13th in 45.51. Furthermore, Saunderson finished 10th in the 200 fly in 1:40.87, which he bested in February at the 2019 CAA Championships with a 1:40.63. Though the 200 fly might be a better event for Saunderson in short course, he might just pop a 44-anything and find himself in the ‘A’ final this year.

Another potential party crasher is Gabriel Fantoni of Indiana. Like Stewart and Albiero, Fantoni will take on the 100 fly/100 back double Friday. The 100 fly comes first, though backstroke is his better event. Still, Fantoni enters the competition seeded 24th with a 45.75 from the B1G Championships, where he also went 44.91 in the 100 backstroke. If he can manage to bring his 100 fly sub-45, he will almost certainly swim in the ‘A’ final, but that would require a major time drop.

As much as I want Saunderson to win, I think Lazna will win this one

Saunderson for the win

This is a stacked field, but UVA’s Bryce Keblish and Zach Fong may have something to show. Zach, in particular, wasn’t primed for ACCs. And this is their last go-round.

Finally some respect for MAXIME. Don’t count him out in the 100 free either.

It’s hard to bet against his beauty as well

I love that pic of Lanza.

Stewart’s underwaters are too dirty.