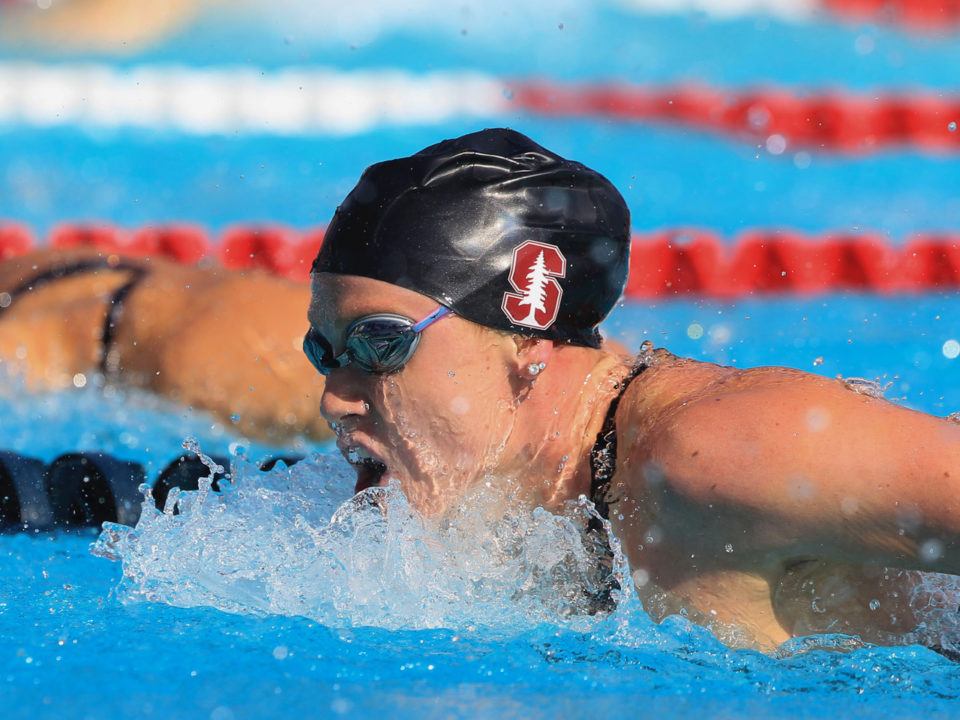 On a historically-dominant Stanford Cardinal roster, it wasn’t five-time Olympic champ Katie Ledecky or seven-time world champ Simone Manuel who led the way. No, the only three-event winner individually was junior Ella Eastin.

Eastin had a sensational NCAA meet, overshadowing even her two teammates who typically refuse to be overshadowed by anyone. Eastin hit the records triple crown (American, NCAA and U.S. Open records) in all three of her individual events during the collegiate season, meaning her swims rank as the fastest in history in those events.

Most notable was the 400 IM, in which Eastin beat Ledecky head-to-head, shattering American, NCAA and U.S. Open records Ledecky had set just weeks earlier at Pac-12s. Prior to February 2018, no swimmer had ever been faster than Katinka Hosszu‘s 3:56.54 from 2012. Ledecky snuck under that record by .01 at Pac-12s, but at NCAAs, Eastin tore through history with a 3:54.60, shattering all historic marks and denying Ledecky’s bid for triple individual titles.

Looking back at Eastin’s unparalleled NCAA season, it’s easy to see just how devastating her summer bout with mono was. With all the momentum in the world, it felt like Eastin was on the cusp of an international breakthrough. But with a roster spot at World University Games secured, a healthy Eastin could be in line for more Swammy recognition come 2019.

I feel like you guys should just wait to do these awards until after SC worlds. There’s so many articles on worlds that stuff like this just kinda gets lost in the mix.

Good choice, Eastin was an impressive high school swimmer who has really just continued to evolve and improve at the NCAA level. That’s really not something you can say about every top tier type recruit. Hope to see that level of success for her on the International stage soon as well.

Ledecky is, as always, amazing. But with the aura of absolute invincibility in the pool, it can be easy to be *almost* disappointed when her results come in looking rather human (again, human by the fastest female alive standards).

C’mon… I love Ella Eastin and hope she continues to improve as she is my favorite female swimmer right now. But this is clearly a product of “Ledecky fatigue”…(similar to Alabama fatigue in college football). Meaning everyone is tired of her winning everything and breaking her own records, or god forbid, she finishes in a time 2nd to her own record!!! She should have won the ESPN magazine most dominant athlete and won this award as well. This is the price she has to pay for stretching herself to be on 400 Relays, and doing IMs…But lets face it, who was the best female swimmer in the NCAA last year (even based on her “sub par” times)?? It was Ledecky.… Read more »

2 Cents – the 400+ argument is a tough one to make here, considering Eastin beat Ledecky head-to-head in a 400-yard event. In regards to the relay point, Eastin swam more relays (2) than Ledecky (1). To the records point, Eastin broke three NCAA records in 2018, Ledecky broke none. The idea that Ledecky is saddled with unrealistic expectations is a fair argument; it just doesn’t apply in this specific case (NCAA Swimmer of the Year), where Eastin pretty handily wins any direct comparison between the two.

Clearly the 400+ argument refers to freestyle, so it is not a tough one to make here if one recognizes that assumption. If you look at the degree of dominance in a particular event, Ledecky would be ahead of Eastin, and both would be behind what King accomplished as a relay swimmer in the 50 breaststroke.

There are only two freestyle events 400+ at the NCAA Championships, so if that is the argument, I don’t think it’s a great one considering the top swimmers can impact up to 7 events. Maybe that’s part of the disconnect here: NCAA swimming doesn’t really value “degree of dominance” much except in relays. You get 20 points for winning an event by 10 seconds and you get 20 points for winning by .01. In a team points based competition like NCAAs, a three-event winner like Eastin is far more impactful than a two-event winner like Ledecky this year, or even than a one-event winner who blows out the field in her one win, like a Kathleen Baker.

Actually as far as individual events are concerned, Eastin and Ledecky were equally impactful. If two teammates finish one two, it does not matter who is one and who is two. The most impactful swimmer for Stanford was Manuel. The dominating performances by Simone in 4 relays more than make up for the fact that she earned only 55 individual points as opposed to 57 or 60.

What about Simone Manuel? She got 55 individual points and was absolutely fabulous in 4 relays.

Jim C – Manuel is an honorable mention, as noted above. She, like Ledecky, only won two events and set no records. In a way, I’m surprised there’s this much controversy over the award going to the only swimmer to win all three of her events and set NCAA, American and U.S. Open record in all three, especially considering our three honorable mentions combined only broke as many records in 2018 as Eastin did herself.