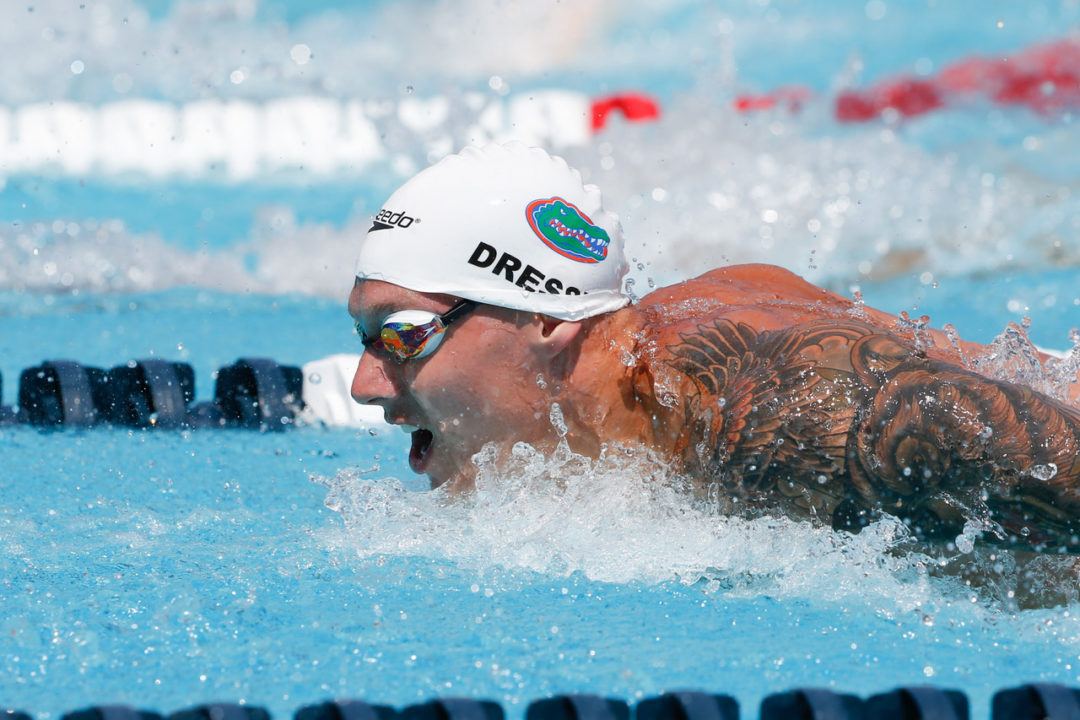 Caeleb Dressel is one of three men ever to break 50 seconds in the 100 fly, and he's the heavy favorite at Pan Pacs even without approaching his best time so far this year. Archive photo via Tim Binning/TheSwimPictures.com

Dressel – easily the top American male in what could be considered the post-Phelps/Lochte era – was the 2017 World Champ and came within a hair of Phelps’ world record from the supersuit era. Dressel was 49.86 to Phelps’ 49.82.

Coming off a lackluster U.S. National meet, the question is just how much more Dressel has in the tank. It’s quite likely he wasn’t fully rested at Nationals, and since last summer’s 49.8 swim, Dressel has cut his short course time down from 43.5 to 42.9. Dressel was just 50.50 at U.S. Nationals, still good enough to lead the world rankings, but well off his 2017 pace. Dressel is the heavy favorite to win this race at Pan Pacs regardless of whether he can go 49 again, but his time will go a long ways in determining just how strong he looks heading into the back half of the 2020 Olympic quad.

Jack Conger sits #3 in the world ranks this season at 51.00. He had an equally disappointing Nationals in pretty much everything but this event: though he made Pan Pacs, he’s got his work cut out for him to claim Worlds spots in the 200 fly and perhaps some relay-distance freestyles. Expect Conger to be primed for Pan Pacs for those events, and for this one, with young Michael Andrew nipping at his heels for the second 2019 Worlds spot.

The minor medals race should be a good one. Australia’s Grant Irvine was 51.00 in the Worlds final last year, though he’s only been 51.50 this season. Brazil’s Vini Lanza went 51.42 domestically and is coming off a solid NCAA season. The aforementioned Andrew is coming off an explosive U.S. Nationals and should fight hard for the U.S.’s second A final slot.

Nao Horomura sits #2 in the world this year with his 1:53.79 from the Japan Swim, and the 19-year-old is the next in a rich tradition of tough Japanese 200 flyers. Daiya Seto comes in as the second seed, and also enters as one of only a few returning gold medalists from the 2014 edition of these Pan Pacific Championships. The 24-year-old Seto has been a world fixture for years, but has only been 1:55.24 this season. He’ll look to return to the 1:54.03 he put up in semis at Worlds last summer.

Japan doesn’t have 2017 Worlds finalist and 2016 Olympic silver medalist Masato Sakai competing, but their third threat is still solid. Yuya Yajima would need a good swim to beat Seto or Horomura, but has been 1:54.72 already this year, ranking 7th worldwide and 4th out of Pan Pacs contenders.

The American lineup is very hard to project at this point. Justin Wright had perhaps the swim of Nationals, coming from the tail of the field over the final 25 meters to win the event in 1:54.63. Keep an eye on Wright, who won’t be out of this race no matter where he is at the 150 turn.

On the other hand, though Wright won the race, he wasn’t able to better the lifetime-best of Conger (1:54.47), who was 5th at Worlds last summer. And world IM champ Chase Kalisz (1:54.79 last summer, 1:55.6 in-season this year) is lurking in what would be his most likely third event for 2019 Worlds. That’s not even mentioning Zach Harting, the crowd-pleaser who showed up for Olympic Trials finals in a Batman mask and onesie, and who beat out Conger and Kalisz head-to-head for the second spot at Nationals last week in 1:55.11.

Only two of those Japanese and American swimmers will make the final, opening the door for Brazil’s Leonardo de Deus (1:55.05 this season) and Luiz Melo (1:55.83 this season) along with Australian Commonwealths silver medalist David Morgan (1:56.36) to make the final.

Colombia might have one of its best A final chances with Jonathan Gomez (1:57.03 this year, 1:56.60 at Worlds last year), and Canada’s Mack Darragh (6th at Commonwealths, season-best 1:56.96) should also be in the mix for an A finals appearance.

Does anyone have a link to a livestream?