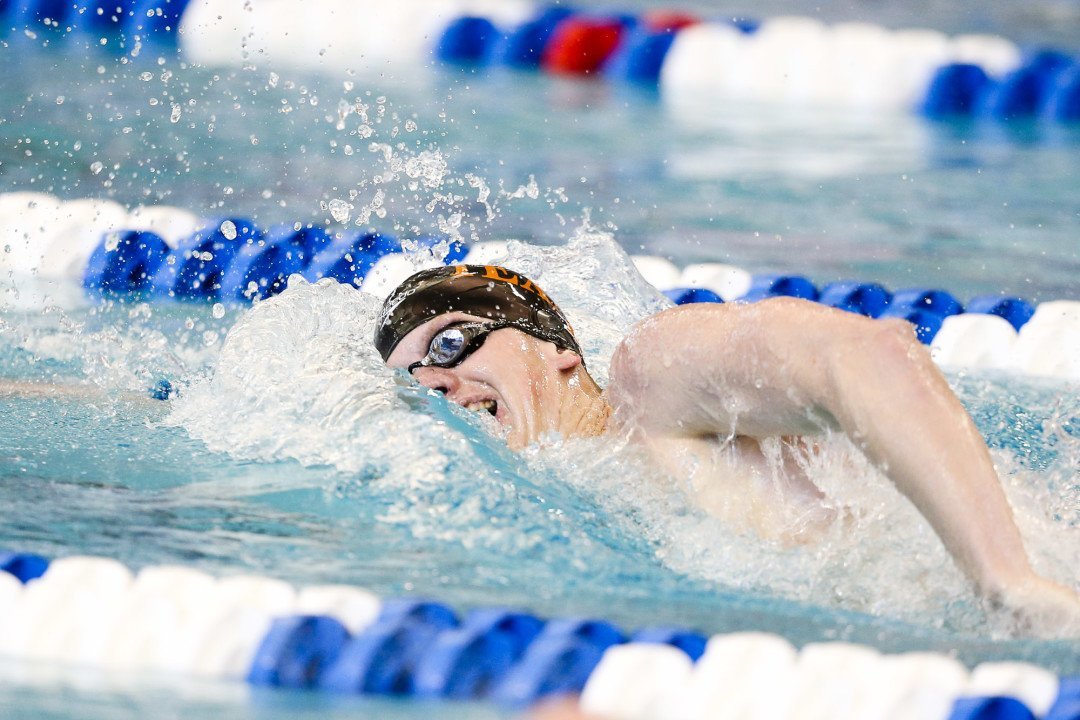 Townley Haas will be looking to regain his 500 free title at the NCAA Championships. Archive photo via Tim Binning/TheSwimPictures.com

After winning the 500 free during his freshman year, Texas junior Townley Haas will be seeking a return to the top of the podium in 2018 after losing out to teammate Clark Smith last year. Smith won the event in a new NCAA and American Record of 4:08.42, while Haas edged out Michigan freshman Felix Auboeck by three one-hundredths, 4:08.92 to 4:08.95, for 2nd.

Now with Smith graduated, the race shapes up to be a showdown between Haas and Auboeck. The two were in very different spots at their Conference Championship meets. Auboeck came within a few tenths of his all-time best to win the Big Ten title in 4:09.29, putting him 1st in the country, while Haas was only third in the event at Big 12s, a much less competitive meet. It may appear that Auboeck is on fire and Haas is way off, but the reality is Texas has no reason to taper for Big 12s, it’s a runaway win, while Michigan fought tooth and nail with Indiana for the Big Ten title.

Taking all that into account, Haas was still much slower in the 500 than he’s been the previous two years at Big 12s (both 4:12s), but he was about even with other years at the Texas Invite this season (all 4:14s). On top of this the 200 free World Championship silver medalist has shown an inclination for speed recently, missing the Worlds team in the 400 free but proving to be one of the best options for the U.S. in the 100 free. It’s possible that the 500 has fallen out of favor for him a tad, but he’s always performed when the lights come on at NCAAs and this year should be no different.

As for Auboeck, he had an unbelievable freshman season, turning heads at Big Ten’s and then dropping time at NCAAs as he narrowly missed titles in both the 500 and 1650. Now a full 1.3 seconds faster in the 500 at Big Ten’s compared to last year, Auboeck could put Smith’s 4:08.42 NCAA record in jeopardy, and also challenge Zane Grothe‘s newly minted U.S. Open Record of 4:07.25. The only thing standing in his way could be if he had too much rest in February, as the Wolverines pushed hard for the team title, but with Michigan pretty dominant in the distance events that was likely not the case. The real question is if Haas can rise to the occasion, as he always seems to, and challenge the Austrian to regain the title.

Along with those two, Fynn Minuth, Akaram Mahmoud, Grant Shoults and Anton Ipsen all swam in the A-final last year, and they’re all near the top of the rankings once again. Minuth, a junior from South Carolina, led last year’s prelims in a personal best of 4:09.55, ultimately placing 5th in the final. He was a bit faster at ACCs (4:10.51) this year than in 2017, so he’s in a good spot to move up. His teammate Mahmoud’s primary focus is on the mile, where he’s been 2nd and 4th the past two years, but he was nearly three seconds faster at the Conference Championships (4:11.47) than last year. If he can drop even half a second from his best of 4:09.73 (also done last year in the heats) he should be right there battling it out for that 3rd spot.

Stanford’s Shoults, who was 4th last year, saw great success over the summer placing 4th at U.S. Nationals in the 400 free and then winning bronze at the World University Games. After going 4:10 at both Pac-12s and NCAAs last season, 4:13.7 at the Conference Championships indicates he tapered a bit less in anticipation of a big NCAA performance. Look for him to be sub-4:10 and in the heat of the battle for a top finish once again.

Ipsen, a senior from NC State, has been an A-finalist in this event the past two years after placing 10th his freshman season. Like Mahmoud he’s more of a miler (where he’s ranked 1st in the country), but has consistently produced 4:11s the last two years and doing so again will get him in the A-final a third straight time.

The one swimmer ranked inside the top-6 who wasn’t in last year’s final is Michigan freshman Ricardo Vargas, a Mexican Olympian who has exploded onto the scene this season. After posting a respectable 4:16.5 at the Georgia Invite in December, he exploded for a 4:11.1 at Big Ten’s to move into 3rd in the country behind only Auboeck and Minuth. If he can hit 4:11-low again he should make the championship final and give himself a chance for a top finish.

After the top six seeds, there are thirteen swimmers seeded between 4:12.7 and 4:14.9 (including Haas who’s 11th at 4:14.43). That makes it really anyone’s game to grab that last spot in the A-final, and also makes for an exciting consolation heat with everyone so close.

Notre Dame freshman Zach Yeadon leads the charge at 4:12.74, dropping over six seconds throughout the year. Harvard’s Brennan Novak (4:13.34) has also seen a big improvement in just a year, going 4:17.4 at the 2017 NCAAs, and Marcelo Acosta (4:13.7) of Louisville will look to avenge his disappointing 27th place finish last season. Stanford senior Liam Egan was 9th last year and is a consistent performer, and Cal freshman Sean Grieshop lowered his personal best at Pac-12s in 4:14.4.

We also can’t forget about the two swimmers who qualified for the meet in a last chance situation, as Georgia’s Walker Higgins (4:14.69) and Arizona’s Brooks Fail (4:14.82) both had huge drops to qualify last minute and have a legitimate shot at the consolation final.

Last year Haas barely touched Auboeck out. It actually looked as if Auboeck had beat him to the naked eye. I think Auboeck takes it this year in a 4:07

Was at the meet last year and taped the race. Every single time I rewatch the ending I can only see Felix out touching Townley.

I picked texas not winning a relay at NCAAs and I feel stupid already.

You can still change it.

Texas will win at least 3 relays.

my pick is neither….i think on of your 2-8 pulls an upset.