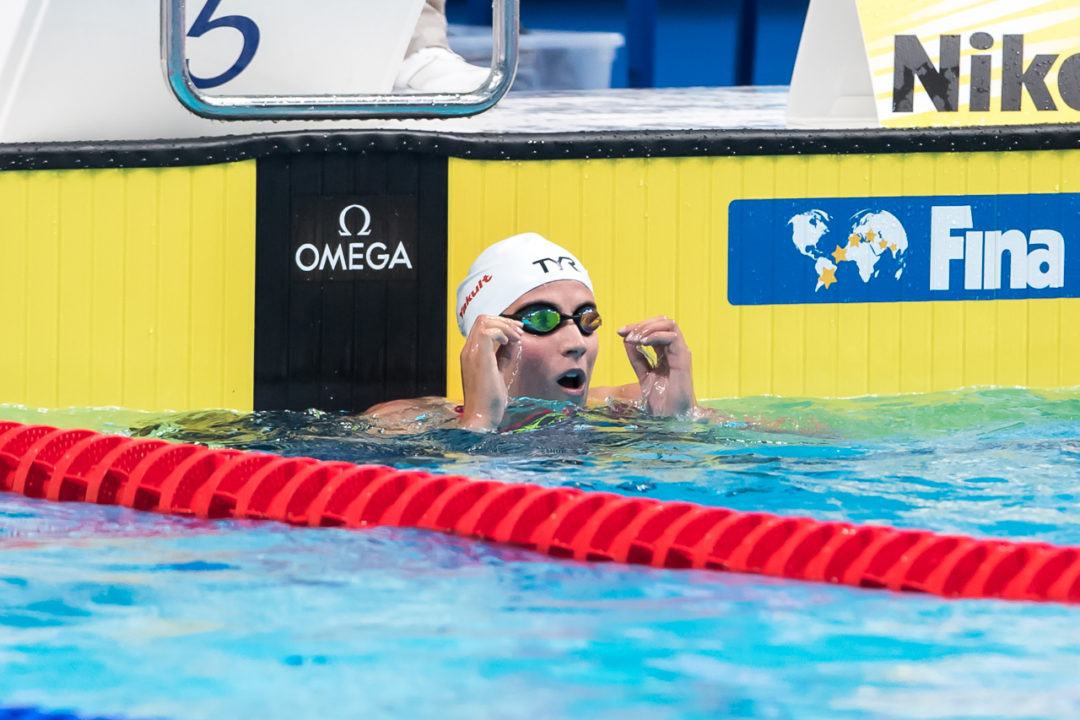 France's Charlotte Bonnet is gunning for a trio of medals across the women's sprint freestyle events, but Sarah Sjostrom, Pernille Blume and others may stand in her way. Archive photo via Peter Sukenik/www.petersukenik.com

A solid number of the current women’s 50m, 100m and 200m freestyle sprint event world-ranked swimmers stem from Europe, setting up some potentially history-making races in Glasgow. French freestyler Charlotte Bonnet is entered in all 3 of the aforementioned events and is primed to be a serious medal contender in each, while Sweden’s powerhouse Sarah Sjostrom and Denmark’s fiery fast weapon Pernille Blume will battle it out in just the 50m and 100m pure sprint events.

Dutch Olympian Ranomi Kromowidjojo notched a new European Championships record back in 2016 in the 50m free event, stopping the clock at 24.07. Behind her were 2 swimming stalwarts in the form of GBR’s Fran Halsall and Denmark’s Jeanette Ottesen, both of whom will not be competing this year. Halsall has since retired and Ottesen is on competitive swimming maternity leave, opening the door for new blood to make a move.

Kromo is currently ranked 8th in the world with her speedy 24.25 from Eindhoven this year, but Blume and Sjostrom have both already been under the 23-second threshold with their 2018 marks of 23.92 and 23.96, respectively. For Blume, her time established a new Danish national record from when she won in Sette Colli, beating her own effort that won gold at the 2016 Olympic Games. That kind of speed is hard to stop, so look for Blume to put up a fight against the relentless Sjostrom and Kromo in the one-length battle.

As mentioned, Bonnet is contesting all 3 freestyle events in Glasgow and the 23-year-old has a shot in each. In the 50m event, Bonnet is carrying her new personal best time of 24.66, a solid effort that falls right in line with the women seeking a minor medal behind the two thoroughbreds in Sjostrom and Blume. The prelims for this race are slated for day 1, which means everyone will be fresh and ready to rumble, although Sjostrom will also be racing the 100m fly later in the morning session.

At the 2016 edition of the European Championships, Sjostrom came away with the 100m freestyle win in a punishing 52.82, representing the only woman to delve into sub-53 second territory. Entering Glasgow this time around, however, we have 2 additional swimmers carrying sub-53 second 100m free efforts in the form of Blume’s 52.72 and Bonnet’s 52.74. Both of these women notched their speedy times at meets this year, which means they’re carrying extra momentum into the European Championships.

Bonnet’s name pops up again, as the French athlete established a new personal best and national record of 52.74, a time that ranks as #5 on the world rankings list, and only behind Blume among Europeans for this season.

Great Britian’s Freya Anderson, the 2017 world junior champion in the women’s 100m freestyle, also has more international racing under her belt, having semi-finaled in the event at this year’s Commonwealth Games. Anderson, just 17 years of age, holds a personal best mark of 53.88, so she’s capable of being in the mix of a minor medal in front of a home crowd.

Federica Pellegrini of Italy may have said good-bye to the 200m free, but she’s still strong and steady in the 100m, bringing a 2018 best time of 53.99 into Glasgow. You can never count out the multiple Olympic medalist, who shocked the world last year in Budapest with a thrilling 200m freestyle victory over American Katie Ledecky. In the 100m here at these European Championships, Pellegrini will need to drop to at least her personal best of 53.92 if she wants to climb up the competitors’ ladder to land on the podium.

The landscape changes in the women’s 200m freestyle, however, with youngsters such as Hungary’s Ajna Kesely and Germany’s Isabel Gose entering the picture. Both teens inflicted major damage at the European Junior Championships already this year, with Kesely winning the 400m, 800m, and 1500m freestyle golds, while Gose topped the 200m freestyle field and earned silver in the 400m.

They’ll be joined by Bonnet, who holds the top-seeded time of 1:55.53, a mark less than a second off of the late Camille Muffat’s national record. Bonnet will be looking to upgrade her bronze medal prize from 2016.

Dutch maestro Femke Heemskerk popped an impressive time of 1:56.11, her fastest in well over a year and is well-seasoned in doing what she needs to do in early rounds to make the most of a final appearance. She took silver in the 200m event behind Pellegrini at the 2016 European Championships.

A pair of promising British swimmers will also be let loose on the 200m, with national champion Eleanor Faulker and freestyle ace Holly Hibbott both positioned to take a run at a medal in Glasgow, fueled by competing on what’s close to their home turf. Faulkner finished 4th in 1:57.72 while Hibbott wound up 5th in 1:58.55 in this 200m free event at the 2018 Commonwealth Games, so both are hungry to improve upon their performances and snag some hardware for GBR.

2020 will probably be the last Olympics for Sjostrom, and Blume and the Campbell sisters, it will be very interesting to watch.

Too bad Freya Anderson isn’t swimming the 200 free. She posted an impressive relay split at Euro Jrs. I’d like to see her lead off the British relay.

Pretty sure Siobhan will be given lead-off duty – She is miss reliable.

Siobhan swam 2nd on the England relay on the Gold Coast. The order is probably up in the air pending the form of the swimmers. Britain should be good shouts to win this. Not sure Sweden or France have the depth.

Hungary has the depth, especially if Hosszú is at least in an acceptable form.

I wouldn’t sleep on Russia even without Andrusenko. Germany has 4 1:58s. Gose is going to be a good talent I think. They could factor if other teams falter.

Who are the likely other members of the Hungarian relay…Jakabos and Verraszto?

Kapas didn’t swim on the relay in Budapest (not in prelims either). I wonder if Szilagyi is an option?

This time she will, no Gyurinovics in Glasgow. Szilagyi is not an option, but Barocsai can swim in the prelims. Kesely will have the 1500 final, Hosszu the 100back final and 200IM semis that afternoon.

Barócsai won’t compete in Glasgow, she is preparing for the Youth Olympics

I think Sjöström will win 4 individual golds. WR is the question.