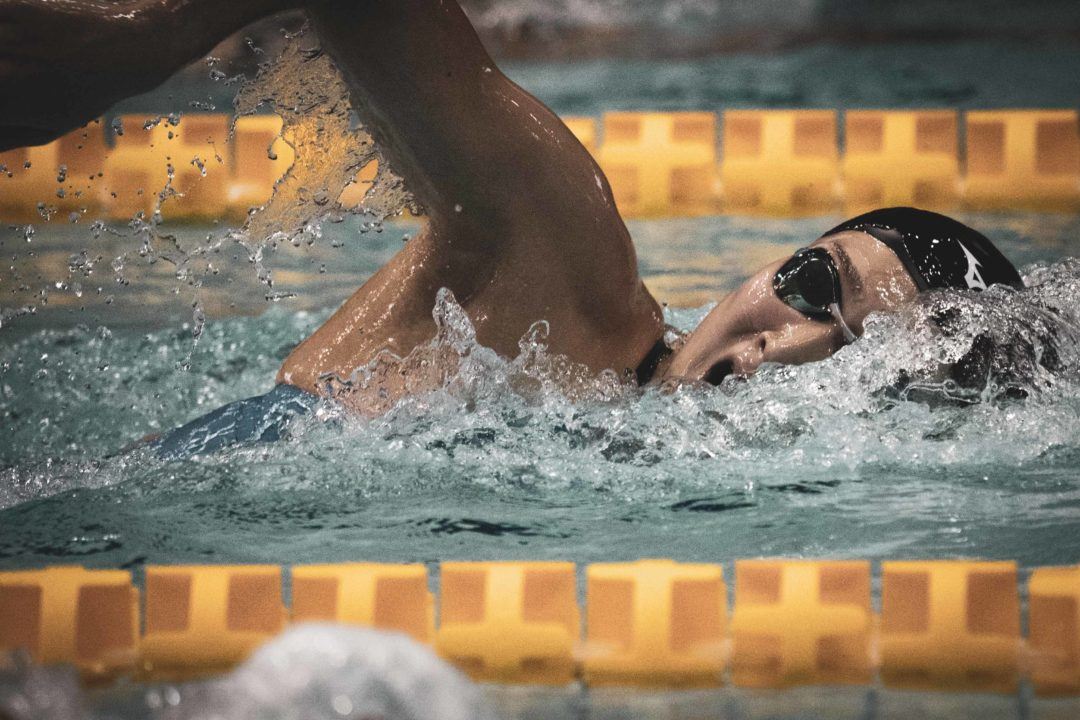 Rikako Ikee is after her 8th medal of these Games, leading heats of the 50 free. She's already won the 100 free, 50 fly, 100 fly, 4x100 free relay and 4x100 medley relay, and took silver in both the mixed medley relay and the 4x200 free relay. Archive photo via Mike Lewis/Ola Vista Photography

The 2018 Asian Games wrap up tonight in Indonesia, with medal finals in six more events.

In the men’s 50 breast, Yasuhiro Koseki is aiming for a sweep of the men’s breaststrokes, but he’ll have to pass up top qualifier Yan Zibei of China, who set an Asian Games record by a huge margin this morning.

China’s women have swept every freestyle gold from 200 to 1500 meters. They get the 400 tonight, with both 800/1500 champ Wang Jianjiahe and 200 champ Li Bingjie in the mix. But Japan’s Chihiro Igarashi is the top qualifier from prelims.

It’s roughly the same story on the men’s side, where Sun Yang is looking for medal #6 and a sweep of the 200 through 1500 frees. He’s just the third seed, but won the 800 over top 1500 seed Shogo Takeda earlier this week.

In the women’s 200 IM, Yui Ohashi of Japan looks to sweep the IM races, but China’s Zhou Min is hot on her heels after prelims. The night will end with the men’s medley relay, where Japan is the top seed and hoping to complete a sweep of the men’s relays this week. The medal table continues to be hotly-contested, with Japan leading 17-16 over China in golds and 46-42 in total medals.

Rikako Ikee finishes this year’s Asian Games with an amazing 8 overall medals, six of them gold. Ikee eked out a tough 50 free victory over China’s Liu Xiang to come to that total. She also smashed three tenths of a second off the Asian Games record with a 24.53, topping Liu’s 24.60.

The entire top three were under the previous Games record, which was 24.87 from the last edition of these Games in 2014. China’s Wu Qingfeng took bronze in 24.87, exactly tying what was previously the fastest swim in meet history. That shows the fast rise of sprinting in Asia, led by young stars like Ikee, 18, and Liu, 21.

Yasuhiro Koseki completed a sweep of the 50, 100 and 200 breaststrokes this week, winning the 50 breast by two tenths. Koseki actually wasn’t able to better the meet-record 27.06 set by China’s Yan Zibei in heats, but took advantage of Yan’s slide in finals to pick up his third gold and fourth medal so far.

The win for Koseki ties him with Xu Jiayu and Sun Yang for the male lead with three individual gold medals in Jakarta, though Sun has a chance for one more later tonight.

Yan faded to 27.25, but still picked up silver, as he did in the 100 breast. It was, in fact, a direct repeat of the 100 breast finish order at the top, with Kazakhstan’s Dmitriy Balandin taking bronze once again in 27.46. Balandin, Kazakhstan’s first Olympic swimming champ, has teased retirement in his post-race comments this week.

In the third head-to-head meeting between China’s young distance stars, 16-year-old Wang Jianjiahe won once again, picking up her third individual gold and fourth overall gold of the meet. Wang was 4:03.18, just four hundredths off her season-best, which ranks 5th worldwide for the season.

Wang has now swept the 400, 800 and 1500 frees in Jakarta, and also swam a key leg on the winning 4×200 free relay. She didn’t swim the 200 free individually, but her 1:55.3 split was the best of anyone on the Chinese relay, including individual 200 free gold and silver medalists Li Bingjie and Yang Junxuan.

China’s Sun Yang completed a return to the 1500 this season by winning the Asian Games title. That marks three consecutive Asian Games golds in that event, reaching back to the year 2010, when Sun set the Games record.

Sun was 14:58.53, the only man under fifteen minutes. That won’t get him into the world’s top 10, but does show that Sun could become a world threat in this event again as he works it back into his training. Sun has also now one-upped Wang’s accomplishment in the previous final, sweeping the 200, 400, 800 and 1500 frees at these Games. Sun has four golds and two silvers in Jakarta this week.

Kim Seoyeong put Korea on the board as one of just four nations to win swimming events in Jakarta. She topped world leader Yui Ohashi by a half-second and set a meet record in an explosive swim late in the meet. Kim’s 2:08.34 improves her season-best, which already ranked 3rd worldwide this season. It also betters her Korean national record of 2:08.61 from earlier this year.

With Kim’s win, the medal table now stands almost exactly tied with one event to go.

China smashed both Asian Games and Asian continental records en route to a statement win in the meet’s final event. The Chinese men went 3:29.99 in the 4×100 medley relay, a time that sits #1 in the world this year – faster than the American men went in winning Pan Pacs (3:30.20) and than the British men went in winning Euros (3:30.44).

Full splits aren’t available, but China had backstroke star Xu Jiayu leading off, followed by Yan Zibei, Li Zhuhao and Yu Hexin. Maybe more impressive is that no one on that relay is older than 23 years old.

Japan finished with silver in 3:30.03, also faster than anyone else in the world this year besides China. Japan’s team was made up of Ryosuke Irie, Yasuhiro Koseki, Yuki Kobori and Shinri Shioura.

i would appreciate it very much if someone can help to note down Singapore’s splits in the 4x100m medley final! i’m unable to watch or follow online, and i dont really trust the website to provide that info.

Hope you can watch this from where you’re. It’s in Thai though.

They said unbale to watch or follow online. Meaning they won’t be able to watch in any form for whatever reason. Work, school, sleep, going out, family or friends coming over, whatever.

thanks dover for the suggestions! haha. i can’t watch cos i’m busy with something else tonight.

How is it unnecessary?

Women’s 50 Free. This should be Ikee challenged by Liu Xiang

“I just hate losing. I’ll win through sheer willpower if I have to.” – Rikako Ikee