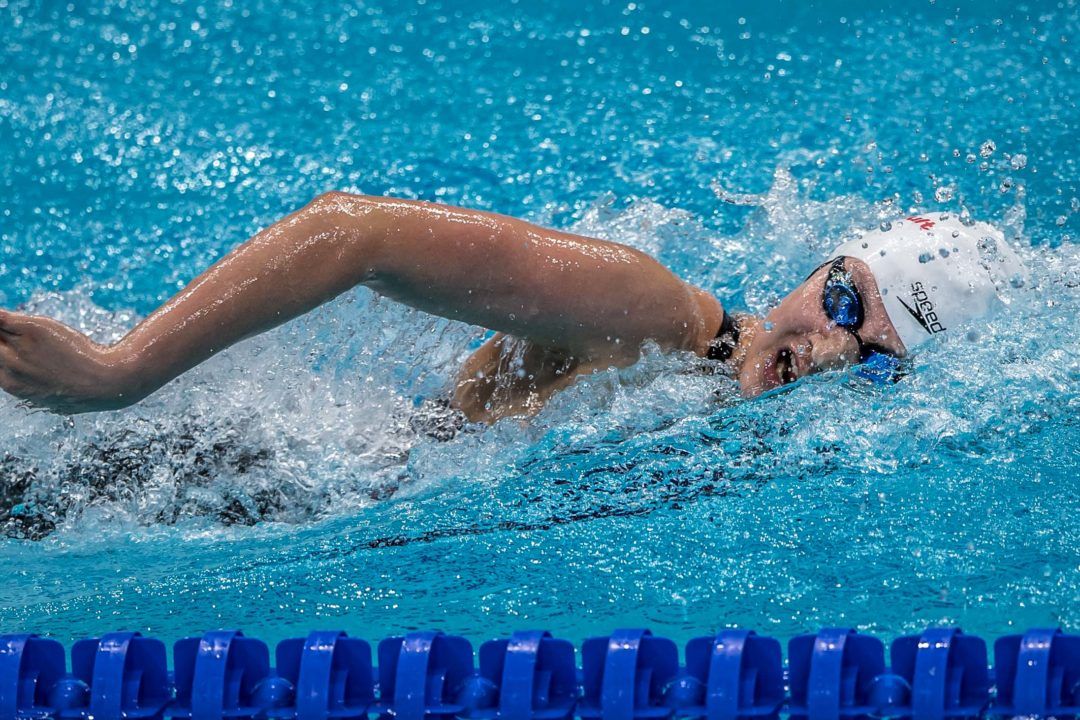 15-year-old Li Bingjie nabbed her 2nd national record of these 2017 National Games of China, while Ning Zetao made a return to racing. Archive photo via Mike Lewis/Ola Vista Photography

The action continued in Tianjin tonight, with 2015 World Champion Ning Zetao making his National Games mark in the pool. Kept off the Chinese roster for Budapest, Zetao has been relatively quiet since Rio. He made noise in his home nation tonight, however, cranking out the fastest 100m freestyle time of the field. After clocking a solid opener of 49.44 in this morning’s prelim, Zetao produced a quick 48.11 to hold the pole position by more than a second over the next-closest competitor, Yu Hexin and his time of 49.32.

Zetao’s 100m free mark of 48.11 tonight would have tied both GBR’s Duncan Scott and Brazil’s Marcelo Chierghini for 5th place in Budapest this summer. We’ll see what the national record holder has in store come the final tomorrow night.

The women’s 200m butterfly contingent was also in the water today, contesting both prelims and semi-finals. Leading through both is Zhou Yilin, the highest placing Chinese swimmer at the 2017 World Championships. Clocking 2:11.52 in the morning, followed by a super speedy 2:08.42, Yilin holds about a half a second lead over the rest of the field. The next closest swimmer is Li Shuang who also touched under 2:10 with a semi time of 2:09.08, with Zhang Yifan and Zhang Yufei both right behind in times of 2:09.14 and 2:09.72, respectively.

Both Yilin and Yufei have a history of finaling in this event for the Chinese, with the pair finishing a respective 5th and 6th in Rio. Both women were also a part of the women’s 200m fly in Budapest, with Yufei taking the upper hand in a 5th place finish in 2:07.06 to Yilin’s 8th place time of 2:07.67.

Yan Zibei, the men’s 100m breaststroke winner here clinched a double in the discipline, taking the 200m event easily tonight in a time of 2:09.56. The 50/100 national record holder was the only swimmer under the 2:10 mark and the 21-year-old is now within a second of the Chinese NR in this event, which stands at the 2:08.71 set just this past April by Qin Haiyang. For Zibei, today’s performance marks the first time the World championships relay medalist has dipped under the 2:10 threshold.

The women saw 2 freestyle finals on the night’s session, first in the form of the 200m. Zhang Yuhan was able to step up from her 2nd seeded position after semi’s with a gold medal-winning effort of 1:56.43 tonight. That was enough to hold off Liu Zixuan who fired off a 1:57.01 from lane 1 to claim the silver. Controversial swimmer Qiu Yuhan held the top seed after semi’s with a quick 1:56.60, but was only able to muster a time of 1:57.99 tonight to wind up 6th and well-off the podium.

Newly-minted national record holder in the 400m freestyle, Le Bingjie, made the 200m freestyle final, but opted out to focus on the 1500m event that also fell during tonight’s racing. The strategy paid off, as the 15-year-old cranked out her 2nd national record, touching in 15:52.87 to win the event handily.

The previous national record stood at 15:58.02 set by Li Xuanxu at the 2011 World Championships in Shanghai. For perspective, Bingjie’s sub-15:55 outing tonight would have earned bronze at the World Championships this past summer behind America’s Katie Ledecky and Spain’s Mireia Belmonte.

Ye Shiwen, double IM champion at the 2012 Olympic Games in London, looked much better in this 200m IM than the 400m IM from day 1, as the 21-year-old was able to claim her first gold in Tianjin. Stopping the clock in 2:10.91, Shiwen was able to beat out the competition by well over a second, while earning a time on her own personal top 10 list.

There’s a legitimate chance of winning 400, 800, and 1500 for her. Seems to be there’s no further drops from Ledecky and only the rising from Binje. Kesely, Titmus and that Argentinian will be the outside challengers.
I have a feeling that Binje might not do the 200 free in Tokyo. There are some very good mid distance freestylers there in China. Zhang Yuhan, Qui Yuhan and then there is a 14 yr old Ai Yanhan.
One thing is for sure , Chinese Authorities will give her every bit of support in order to challenge the Ledecky american dominance .

Chinese Authorities will give her every bit of support in order to challenge the Ledecky american dominance.

These times the Chinese are posting are suspect. Where were these times/swims at Worlds?

The Chinese swimmers posting great times are those that have been in the rise lately. There no new face so far.
Li bingjie and qin haiyang,s progress have been steady.

Ning Zetao 48,1 then 47,9 on finals.. well.. if you watched Swimming World Champs before Budapeste you would know (Not That I Held Zetao on high regards but..) JohnJ, before typing these conclusions you should at least check google for the swimmers results..

Of course , these games are much more important to them than the worlds ….
It comes only after 4 year.
Who knows what will happen by then ,,,

Li bingjie,s 1:56:28 split in the relay is not bad but she,s definitely a distance swimmer. If she gets taller then the 200 free could be her forte.

As soon as China gets another swimmer that can beat her in the IM, she’ll be gone from the scene.

That being said, Ye was obviously talented, but her technique was never that great and her insane times felt more like a second coming of the 1994 chinese then a legitamate preformances. China is also known to have problems with doping, alot of which has… Read more »

I think Ye downfall was more due to getting older (Someone posted she gained near 8kg since 2012) due to Maturity and seems some injuries too.. Some Girls tend to suffer a lot as they get older if they can´t adapt to body changes on swimming

What happened to Ruta was the same. I guess .
And i think it will affect the Ledecky too.
We might not see her breaking world records again .

Yes kots of people but so few pools

Li said in an interview that she will surpass Ledecky soon, and will eradicate her WR in Tokyo.

hopefully that will motivate ledecky even more…

That’s a little over the top

How? People have goals.

I feel like saying with certainty that she will soon pass someone who is 3 seconds(?) ahead in the 200, 5 in the 400, 11 in the 800, and 27 in the 1500 is over the top and maybe a tad arrogant. It’s a good goal but saying with certainty she will pass her soon and eradicate her records is a little much. She could start by becoming second faster performer in history in each event.

nah Li wants to surpass Ledecky as soon as possible. that’s why she did 200-1500 at age 15 (ledecky did not), but she dropped 200 final last night cause of 1500. either way, you can tell she’s ambitious and will do anything to pass ledecky before Tokyo. i’m sure her parents(both happened to be distance swimmers), trainer , and chinese media influenced her as well.

it’s a goal. but you dont say it as if you are superior.

i know, and Li repeats that after every race.

That’s sounds like brainwashing or indoctrination. I wouldn’t doubt that someone “suggested” to her to say that.

Maybe she’ll say that to Katie herself at the next WCs. Wouldn’t that be interesting.

Li said she will learn english so she can communicate with ledecky. and the first thing she will say to her is “i will beat you”

Lol what ? Really ?
Ledecky can use that for some motivation.

I’ve never heard Li saying that. I think Ann was just faking her “Chinese” identity. Li expressed that Ledecky is her goal and she wanted to surpass her one day. The journalists only mentioned Ledecky on the first day of the game. The communication later mainly focuses on Li’s preparation for the various events and how her coach helped her.

went back and reviewed it. If you read enough of her articles and interviews. she did use the word “for sure” “most definitely” “will” a lot of times. those words are in definite terms. please don’t attempt to diminish her meanings. It’s a great ambition for sure, and she got great confidence! And please, she did mention Ledecky way more than once, and it all started in WC.

It sounds like some nuances were lost in translation.

Only thing she will eradicate is her common sense.

Can a Moderator delete my previous comment? I shouldn’t have just looked at
the secondary Chinese new resources, and “eradicate” is a interpretation on my part. I also noticed it is the media
that keep bringing up the topic after races, so you can’t really blame the girl.